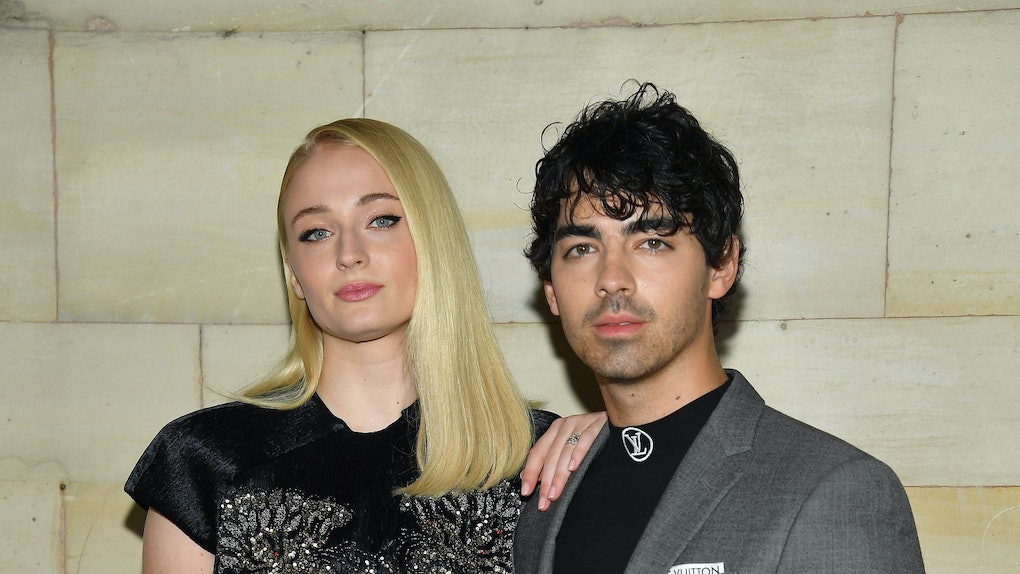 Where Will Joe Jonas & Sophie Turner Get Married? It's Reportedly A 2019 Destination Wedding

Just months after Nick Jonas and Priyanka Chopra tie the knot in India, another Jo Bro could be going abroad for his walk down the aisle. So, you might be wondering, "Where will Joe Jonas and Sophie Turner get married?" Well, get ready for a dose of wanderlust, because a new report from Us Weekly now suggests that a 2019 destination wedding is in the works. It looks like the lovebirds are taking cues from Nick and Priyanka's fairytale Indian nuptials, because Sophie and Joe are reportedly making things official in France, aka the destination of l'amour. Elite Daily reached out to both Jonas' and Turner's teams for comment on the reports, but did not hear back by the time of publication.

Speculation first started swirling that Joe Jonas and the Game of Thrones actress were planning to take their wedding day overseas on Saturday, Nov. 24 when life coach Mike Bayer appeared to post (then delete) a photo of his wedding invitation. Bayer took to his Instagram Story to share a now-deleted shot of a wooden box inscribed with the golden script, "Sophie and Joe 2019 France." Not only did the snap seem to suggest that the couple, who's been engaged since October 2017, were finally making moves on a wedding date, but that they were also planning to do the thing in the most romantic of places, per Cosmopolitan.

Now, Us Weekly is reporting that an inside source has confirmed the rumors, and that the marriage will reportedly be happening next summer. Of course, it's always good to take these reports with a grain of salt because Sophie and Joe have yet to confirm anything, but the photos of the invitations look pretty legit and all kinds of fancy. Fan account @FanBelfastLeigh posted a video of the now-deleted Story on Nov. 24.

TBH, I wouldn't be surprised if Joe and Sophie are waiting until after Nick and Priyanka's multi-day wedding festivities are over so that they're not encroaching on the newlyweds' big day. Plus, it appears that Paris already holds a special place in their hearts, as both the singer and the actress took to Instagram on Oct. 3 to share photos of a date night in the city of love.

With the reported timeline, there's still at least half a year to go until Turner and Jonas make their love official, and I couldn't be more excited for the romantic ceremony. If Nick and Priyanka's nuptials are anything to go by, I'm predicting that family will play a big role in the celebration. Who knows, maybe father-in-law Kevin Jonas, Sr. will also be officiating their wedding.

The Jonas clan is reportedly already a big fan of their newest addition and were "thrilled" by the news of their engagement, an insider told People back in Oct. 2017. "Everybody’s very, very happy for them and their family and friends are all thrilled," the source said. "Everyone loves them together. She’s young but is beyond her years and is crazy, crazy mature. He’s never been like this with a girl." Aw, sounds like true love to me.

The longtime couple's impending marriage also raises questions about the bridesmaids. In January this year, Game of Thrones co-star Maisie Williams confirmed that she'd already been offered the honor, and I have a feeling that Turner — who appears to have been a member of the bridal party at sister-in-law Priyanka Chopra's wedding — will return the favor and also ask the Quantico actress to be a bridesmaid. You know, since they're basically "J sisters" now and all.

Hopefully more details will come to light after Nick and Priyanka end their weekend of wedding revelry. In the meantime, I'll be feasting my eyes on the photos coming out from their wedding. Seriously, though, could this couple look more in love?

More like this
Is Taylor Swift's "Mr. Perfectly Fine" About Joe Jonas? Sophie Turner's Instagram Has Fans Curious
By Brandy Robidoux
Why Did Addison Rae Deactivate Her Twitter? Fans Think This Is The Reason
By Brandy Robidoux
Big Hit's Response To Rumors BTS' 2021 Comeback Is In May Is Making ARMYs Suspicious
By Michele Mendez
Stay up to date