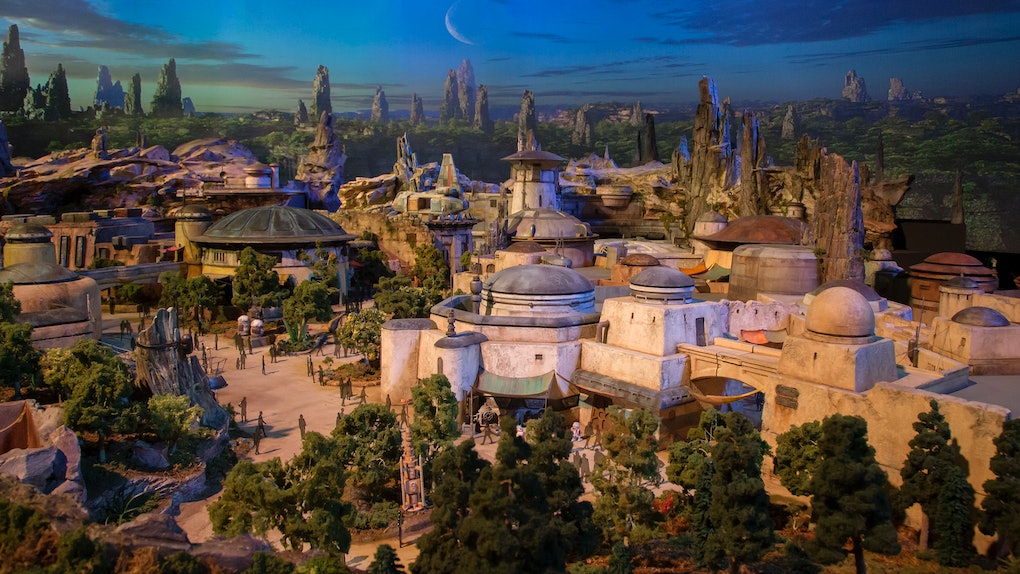 Head's up Star Wars fans: Disney just announced the opening dates for both Galaxy's Edge lands. If you've been waiting and waiting for the theme park to announce the official opening dates, you've come to the right place. Now, you're probably still wondering: When will Star Wars: Galaxy Edge open? Well, I'm happy to share that Disney's latest announcement contains nothing but good news for eager park goers.

The anticipation of Star Wars: Galaxy Edge really had me so excited. I haven't lost any sleep over this or anything, but all of the renderings look so amazing. The time has finally come and Disney is pulling back the curtain on the exact opening dates for the California location and the Florida location. Per Disney, Star Wars: Galaxy's Edge will open at Disneyland Park in California on Friday, May 31 and at Disney's Hollywood Studios at Walt Disney World Resort in Orlando, Florida on Thursday, Aug. 29.

Star Wars: Galaxy's Edge is a total of 14 acres at both Disneyland Park and Hollywood Studios. Throughout both parks, you'll be able to find all sorts of Star Wars-inspired food and drink items, as well as tons of awesome rides to boot. I know it's hard to imagine what living on another planet might be like, but based on images, Disney's Star Wars: Galaxy's Edge does just that. Per Disney, guests will feel like a part of the story as they immerse themselves in "their own Star Wars adventures" in the Black Spire Outpost village on the remote planet of Batuu. Oh, and you can totally expect to find all sorts of shops to stock up on your favorite Disney Star Wars gear.

Star Wars: Galaxy's Edge will open in two phases, according to Disney. On the first day that Star Wars: Galaxy Edge is open to the public, park goers will be able to explore planet of Batuu. Per Disney, there will be samples of the land's unique food and beverages offerings for you to try, you'll be able to peruse the shops, and you can even take the helm of the notorious Millennium Falcon: Smugglers Run ship.

Now, if you're curious about phase two, well, that won't open until later this year. Phase two includes the Star Wars: Rise of the Resistance attraction. You'll be front and center of a showdown between the First Order and the Resistance. Per Disney, this attraction "will blur the lines between fantasy and reality." Sign me up.

If you're planning to visit Star Wars: Galaxy's Edge at Disneyland Park between May 31 and June 23, you must purchase a ticket to get in. You will also be required to make a no-cost reservation, according to Disney. This reservation allows you to access the Star Wars land and is subject to availability. There aren't any details yet about how to go about making the reservation. Disney is advising guests to check back later by visiting the Disneyland website and the Disney Parks Blog to learn more.

All of this news has me so excited about the opening of Star Wars: Galaxy Edge. The fact that Star Wars: Galaxy's Edge is opening up sooner than I thought it would is music to my ears. I seriously can't wait to check it all out.

More like this
'Guardians Of The Galaxy 3': Release Date, Cast, Trailer, & More Details
By Ani Bundel
Here's How To Go Live On TikTok To Switch Up Your Videos
By Daffany Chan
What Does Pepsi Blue Taste Like? It Has Familiar Fruity Flavors
By Cianna Garrison
Stay up to date