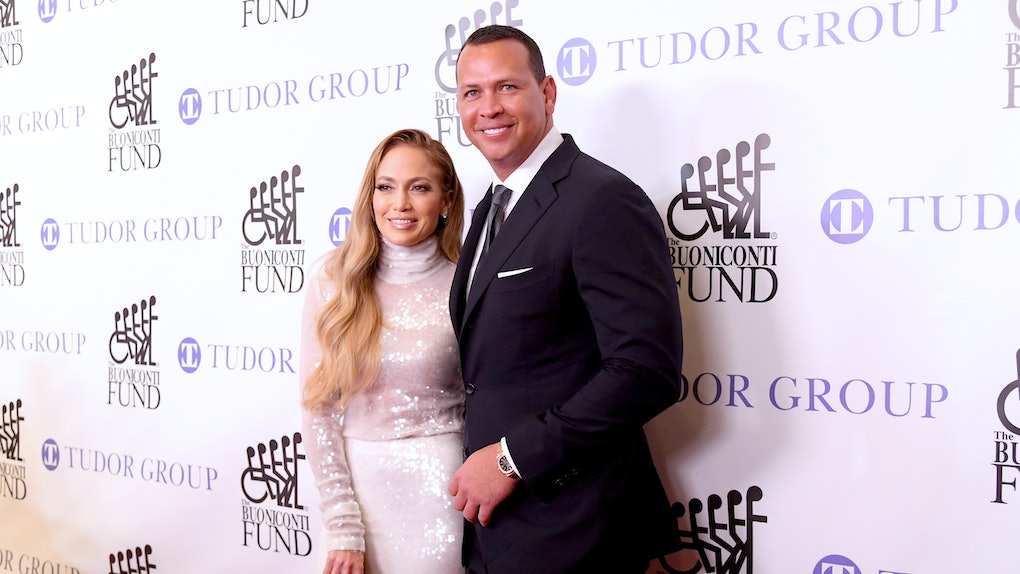 When Will Jennifer Lopez & Alex Rodriguez Get Married? She Just Hinted When It Could Happen

Raise your hand if you hopelessly adore the coupling of Jennifer Lopez and retired Major League Baseball player Alex Rodriguez. At first, it seemed a little bit questionable, but now that they've been dating for almost two years, it seems like they really work together and are *not* here for any drama, which I love. Their strong relationship has many fans wondering: when will Jennifer Lopez and Alex Rodriguez get married? It's a good question, and the pop star has an even better answer that makes total sense.

Jennifer Lopez opened up to People about her relationship with A-Rod, saying, "We love each other and we love our life together," adding that their children (Lopez's 10-year-old twins Max and Emme, and Rodriguez's daughters Natasha, 14, and Ella, 10) are the main priority in their life. "Kids are so beautiful and open to love and new friends," Lopez said. "I was so loving to his kids and he was so loving and accepting of mine, they embraced each other right away. [It was] ‘I get a new bonus brother and sisters to hang out with all the time, and it’s nice.'"

And, now that the world is in the holiday spirit, fans are wondering if it's also the season for love for the power couple. Are they ready for marriage?

"We think about getting married, but it will happen naturally when and if it’s supposed to," Lopez revealed.

OK, but doesn't a Christmas Eve proposal sound kind of perfect for these two? LET HIM LOVE YOU, J.LO!

But in all seriousness, it seems like these two are in no rush for marriage and are super happy together. A source previously told Us Weekly that, while the pair have "talked about" getting married, J.Lo was unsure if she wanted to go through with yet another wedding. "They were ready to get married early on and talked about it," the source said. "But Jennifer decided she wants to do it differently this time. She's been down the marriage road and doesn't know if she wants to do it again… Everything is working out so well, she doesn't want to jinx it or change anything." Elite Daily reached out previously to Lopez and Rodriguez about the report, but did not hear back by the time of publication.

You heard the woman. She's perfectly happy in her relationship status and is not looking to rush into marriage by any means.

This isn't the first time that Lopez has spoken about her romance with A-Rod, either. Back in March 2018, she opened up to Harper's Bazaar about the topic of marriage. "I do believe in marriage. And I would love to grow old with somebody in a committed relationship. But I’m not forcing anything right now."

Have you ever heard anything more casual in your life?

Let's give a big round applause for our girl J.Lo, because she's been effortlessly cool since she stepped on the scene back in the '90s and has no plans of slowing down.

Shine on, girl. Shine on.