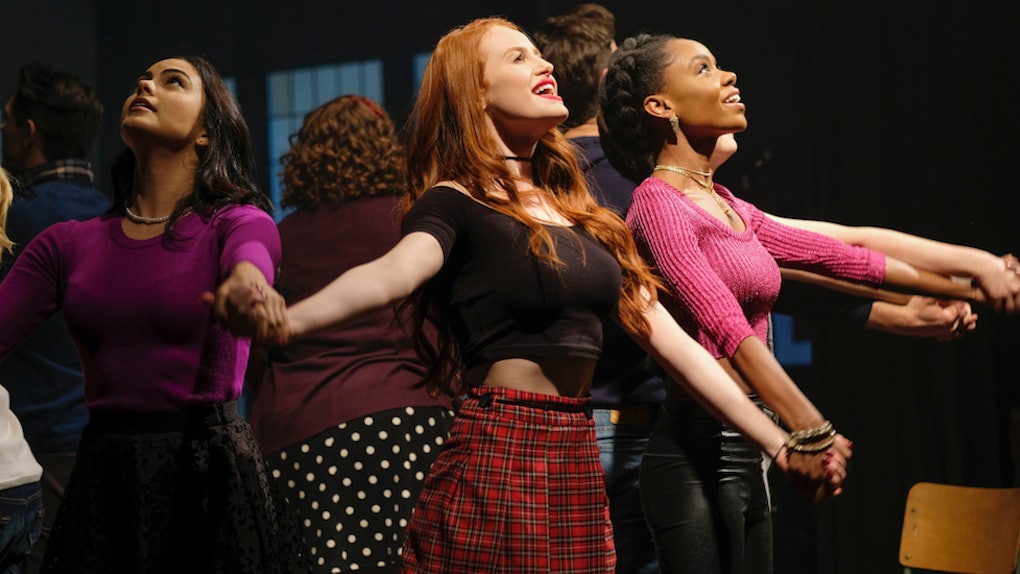 When Does 'Riverdale' Season 2 Episode 18 Air? The Musical Episode Is Coming

Okay, Riverdale fans, I've got good news and bad news. The bad news is that we will not be getting a new episode for the next couple of weeks, but the good news is that our patience will be rewarded big time when the series returns... because the next new episode is the musical one! So when can we expect this musical goodness to hit our TV screens? When does Riverdale Season 2 Episode 18 air? Thankfully, we aren't going to have to wait too long.

Though Riverdale fans will have to wait until April 18 to get back into the story, the musical episode, entitled "A Night To Remember," promises to be a standout. Another bit of positive news is that this is the last break from regular, weekly scheduling that Riverdale is intended to take for the rest of Season 2, which still has five episodes left.

So, yeah... Unfortunately, it's going to be a bit of a wait, but Riverdale has been kind enough to give us a ton of footage, photos, and details about the new musical episode to keep fans busy theorizing about what's in store. For instance, check out this teaser trailer for the episode:

That may be a short clip, but it includes more than enough info to get Riverdale fans pumped for a shocking new episode. As the high school rehearses for its production of Carrie: The Musical, it looks like Betty and Veronica are starting to fight, and Archie is placed in another difficult position when Hiram Lodge — his girlfriend's father/town mob boss whom he swore a blood oath to — seemingly threatens his dad.

But the biggest moment from the teaser? Ummm, the Black Hood is back! After we see a sandbag narrowly miss Cheryl Blossom, who is starring in the school musical, director Kevin Keller reveals that he got a note from the Black Hood threatening to attack Cheryl again unless she is replaced as the star of the show.

The Riverdale team recently confirmed that the Black Hood would return to the show before Season 2 ends, and it looks like that mystery is getting resurrected in the very next episode.

The CW has also shared some photos from the new episode that will give fans a better idea of what Riverdale High's production of Carrie: The Musical is going to look like. There's a shot of Betty and Veronica belting out a song side by side.

And the two actresses coupled up with their dance partners for the show: Betty with Archie and Veronica with Chuck Clayton. Hmmm, could Betty and Archie's pairing in the musical be what is behind the Betty-Veronica fight that we saw in the trailer?

Finally, the pièce de résistance is the star of the show: Cheryl Blossom in her full Carrie White glam... pre-pig's blood.

Showrunner Roberto Aguirre-Sacasa also shared some pretty interesting details about the musical on his Twitter back when the episode was first announced in January. He uploaded Riverdale High's Carrie: The Musical cast list, revealing which parts each Riverdale star would be playing:

The cast list may be hinting at some pretty information about the upcoming episode, especially when paired with the trailer and photos. For instance, Chuck Clayton isn't on the cast list, but we see him dancing with Veronica in the photos from the episode. On the other hand, Reggie Mantle is nowhere to be seen in footage from the new episode, and his name on the cast list is the only one that is unsigned. It looks like Reggie is going to be dropping out of the musical for some reason, and Chuck will be stepping in to replace him.

The musical episode of Riverdale, "A Night To Remember," will air Wednesday, April 18, on the CW.

More like this
When Will 'Riverdale' Season 5 Return In 2021? Its Mid-Season Break Is Long AF
By Rachel Varina
Disney+'s 'High School Musical' Series Season 2: Release Date, Trailer, Cast, & More
By Ani Bundel
The 'This Is Us' Season 5, Episode 14 Promo Teases Another Beth Story
By Ani Bundel
Stay up to date