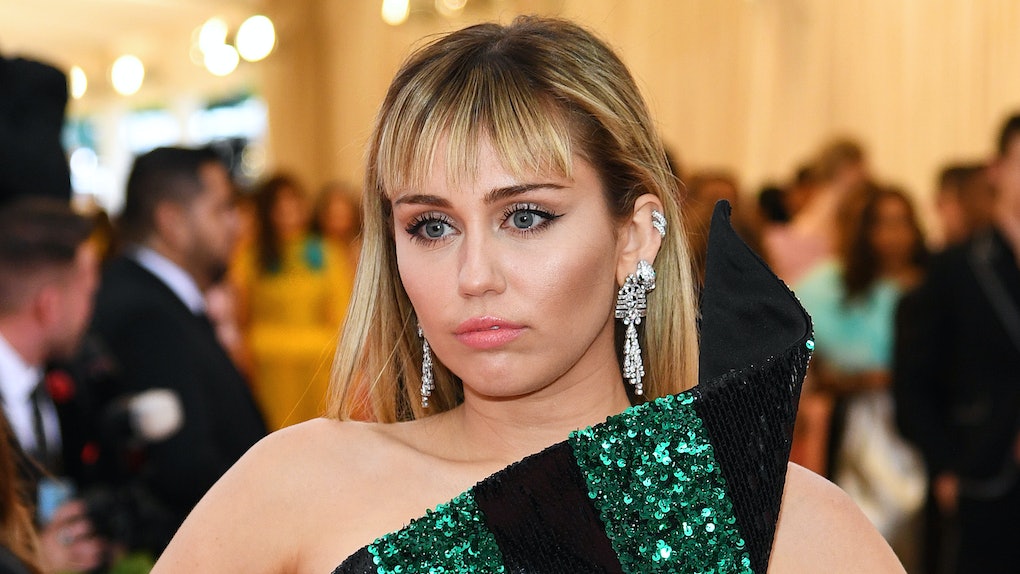 When Does Miley Cyrus' 'She Is Coming' Album Come Out? She's Teasing New Music Non-Stop

Miley Cyrus' new music is coming. The singer has been teasing the upcoming arrival of her next album all over her social media lately, using the phrase "SHE IS COMING" to get fans all riled up. But when does Miley Cyrus' SHE IS COMING album come out? And is it even called She Is Coming? These are the questions her fans need answered.

Cyrus' currently pinned tweet on her Twitter account is a video that flashes "SHE IS COMING" in black and white on repeat. (Warning for those who are epileptic or are sensitive to lights: the video is effectively a strobe light. It might be best to steer clear.) The video clearly states that something is coming, and through her other tweets and posts to her Instagram, it's clear that it's new music. What Cyrus hasn't yet clarified is whether or not we should be taking the "SHE IS COMING" marketing campaign to mean that that's her new album name, the name of her new single, or rather just a message to fans to hold on tight because a new album is coming soon.

And it might be coming pretty damn soon. Cyrus' current cover photo on her Twitter is a black photo with white text going across it that reads "SHE IS COMING 5/30." This seems like the confirmation fans need that the album is titled SHE IS COMING, and that it's coming at the end of May!

Whatever is coming — be it a single or an album — it'll be here on May 30, and Cyrus stans are pumped. She even seemed to have teased the music on her Instagram and Twitter recently.

Cyrus also posted three shots to her Instagram promoting the new music. It showed her posing in front of a pile of trash bags she called her "friends." First of all, relatable. Second of all, it seems like Cyrus is ushering in a new era of music that's more similar to the Bangerz era than it is Younger Now. Given the change in her social media strategy over the last few months, Cyrus is clearly changing things up with this album.

And she even revealed what appears to be one of the album's singles while at the Met Gala on May 6, and it's called "Bad Karma."

Cyrus accidentally teased some information about this song in an interview while she was in London in January.

“I’m such a visual person, that when I record a vocal take — this is really creepy, this is a girl thing — I imagine what lipstick I’ll be wearing in the music video,” Cyrus said.

And that's when she let the song title slip. “Like ‘Bad Karma’ — ooh, I shouldn’t have said that, well, there you go," she said. There we go, indeed. Based on the snippet of the song that can be heard in the above video of Cyrus and Liam Hemsworth on their way to the Met Gala, the song sounds like a bop.

Based on Cyrus' clues — the intentional and accidental alike — I'm going to bet that her new album is called SHE IS COMING, and that's it will drop in full on May 30. Are y'all ready?!