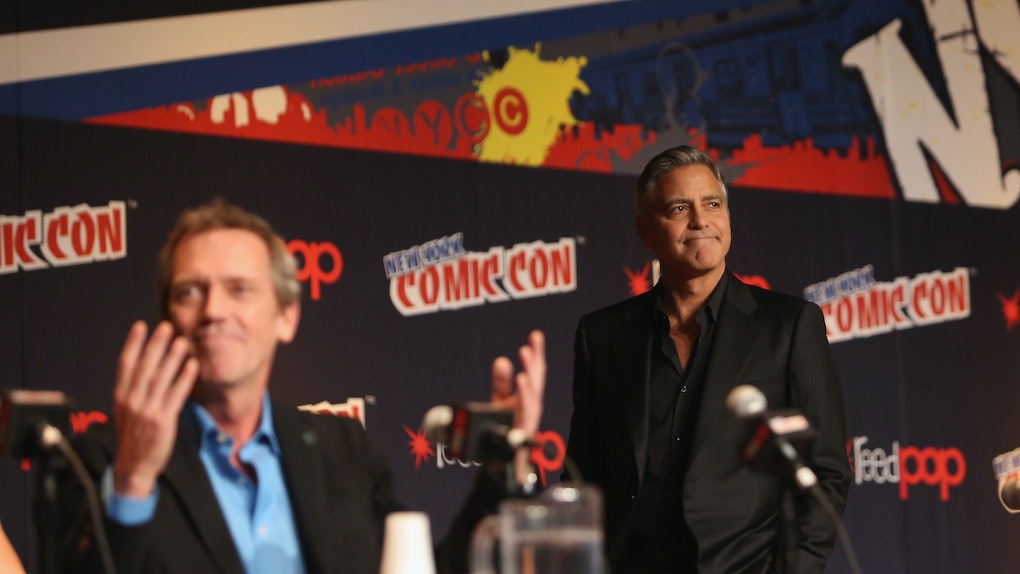 When Does 'Catch 22' Premiere? George Clooney's New Show Is Coming To Hulu

When it comes to TV doctors, for a long time it seemed like ER's Doug Ross, the role that shot George Clooney to fame, couldn't be beaten. That was until House came along and introduced us all to Hugh Laurie's Gregory House. Now the two biggest TV doctors are finally getting together in a new series. Hulu announced this week that Laurie would be joining Clooney to star in the streaming service's newest dystopian novel adaptation, Catch-22. So when does Catch-22 premiere, and how funny will the two of them be together?

This is Laurie and Clooney's second project together, the first having been the Disney film Tomorrowland a few years ago. Just don't call either of them "Doctor." Catch-22 is not a hospital drama, but a World War II-era satire. Both men will be playing executive officers of the army in question. Clooney was already announced to star as Colonel Cathcart, the novel's main villain. Laurie will play the not-so-bright Major de Coverley.

Laurie will play Major de Coverley, a squadron executive officer on Pianosa air base. A noble, leonine presence, like some Civil War general, de Coverley dances to the beat of his own drum. Regarded with awe by the men, he spends his time pitching horseshoes, listening to jazz on his phonograph, mixing himself martinis, and hiring apartments for the officers in every new city the Americans take.

If you're not familiar with the Catch-22 novel by Joseph Heller, and are wondering if it's related to the slang term "Catch-22" (which is defined as "a frustrating situation in which one is trapped by contradictory regulations or conditions"), it's actually where the term came from in the first place. Heller wrote Catch-22 in the 1950s, satirizing the war experience, and how those fighting are caught in a ridiculous bureaucracy that creates a "damned if you do/damned if you don't" situation. The book itself was published in 1961 and is considered today to be an American classic.

Here's a synopsis of the story:

Set in Italy during World War II, this is the story of the incomparable, malingering bombardier, Yossarian, a hero who is furious because thousands of people he has never met are trying to kill him. But his real problem is not the enemy—it is his own army, which keeps increasing the number of missions the men must fly to complete their service. Yet if Yossarian makes any attempt to excuse himself from the perilous missions he’s assigned, he’ll be in violation of Catch-22, a hilariously sinister bureaucratic rule: a man is considered insane if he willingly continues to fly dangerous combat missions, but if he makes a formal request to be removed from duty, he is proven sane and therefore ineligible to be relieved.

While the lead role is that of Yossarian, played by Christopher Abbott (The Sinner), it speaks volumes that so far the A-list names that Hulu has cast are in the roles of the bureaucrats and officers, whose farcical personalities are far more memorable than the poor schmuck flying the mission itself. Other characters yet to be cast include the fabulously named Milo Minderbinder, Lieutenant Colonel Korn, and Major Major Major Major.

This will be the second major adaptation of the book for the screen since the book's publication. During the Vietnam war, the book was made into a feature film, which was released in 1970. Hulu's plan is for this version of Catch-22 to be a stand-alone "limited" six-part mini-series.

Current plans have it filming later this year, with a tentative release date to the streaming service in 2019.