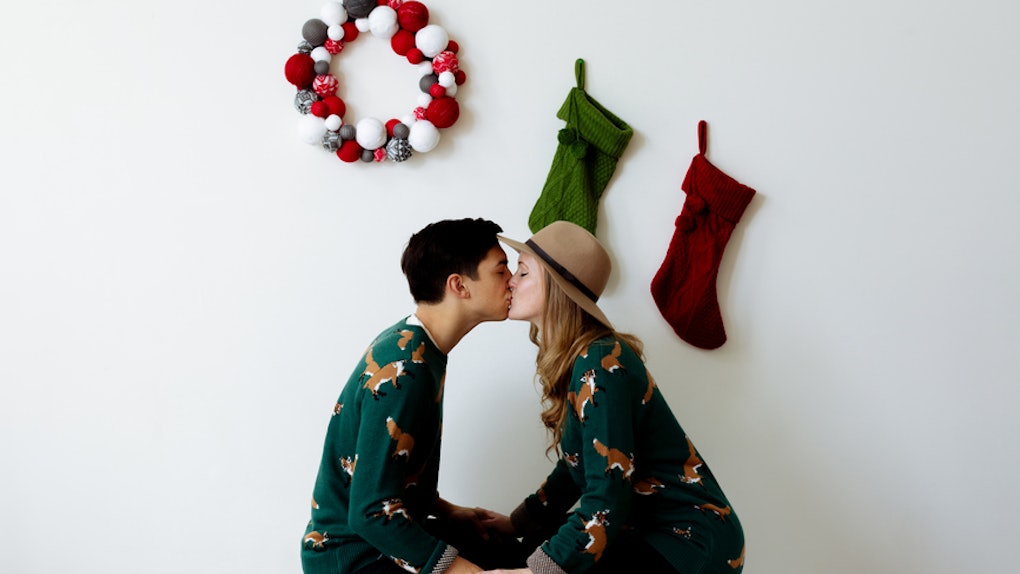 When Do People Have The Most Sex? The Holidays Are Prime Time For Sexy Time

Ah, the holidays. They're the loveliest time of the year. You get gifts from your loved ones, incessant questions from grandma about either 1) why you're still single, 2) when you and your partner are getting married, or 3) when you and your spouse are having kids. You also fill up on all of the most delicious foods you could possibly imagine. But one thing you DON'T hear about people doing a lot during the holidays? It's the most popular time to get it on... wait, what? Yep, that's right. If you've ever caught yourself thinking, "Hmm... when do people have the most sex?" Wonder no more.

A recent study found that the holidays are prime boinking time for a lot of people. Researchers have noted for a while now that birth rates in many countries spike in September (AKA nine months after the holiday season), but most have credited the increase of births to simple human biology patterns. This new study, however, found that the spike in births could actually have something to do with cultural patterns instead, according to Science Daily.

Researchers from Indiana University and the Instituto Gulbenkian de Ciência in Portugal pulled data collected from Google searches entered in 2004 to 2014 from almost 130 countries, and even used Twitter-based data, pulling 10 percent of public tweets people posted between 2010 and 2014.

Based on their analysis, the researchers found a spike in searches of sexual terms during two major religious celebrations. The first was Christmas in countries with large Christian populations, and the second is Eid al-Fitr (AKA the celebration at the end of Ramadan) in countries where the majority of people practice Islam. Not only that, but researchers found the increase in sex-related searches still existed even though the date of Eid al-Fitr changes year to year. So basically, no matter when the holiday is or what sort of religion your country adheres to, the holidays do bring about everyone's ~sexy~ side.

From looking at Twitter posts, the researchers found that people's word choice in tweets posted throughout the holidays hinted that they were in better moods. While other holidays like Thanksgiving and Easter didn't show that same increase in mood and spike in sex, the two went hand in hand during Christmas and Eid-al-Fitr. "We observe that Christmas and Eid-Al-Fitr are characterized by distinct collective moods that correlate with increased fertility," said Luis M. Rocha, a professor in the IU School of Informatics, Computing and Engineering, and a co-leader of the study. "Perhaps people feel a greater motivation to grow their families during holidays when the emphasis is on love and gift-giving to children. The Christmas season is also associated with stories about the baby Jesus and holy family, which may put people in a loving, happy, 'family mood.'"

Aside from the fact that the increased interest in sex for a lot of people could potentially mean you have an increased likelihood of getting some this holiday season, this study could signal some really powerful things on the way regarding how research is conducted for the world as a whole.

"The strong correlation between birth rates and the holidays in countries where birth-rate data is available — regardless of hemisphere or the dominant religion — suggests these trends are also likely to hold true in developing nations," Rocha explained. "These types of analyses represent a powerful new data source for social science and public policy researchers."

It's really beautiful, isn't it? No matter what religion you adhere to or what country you're living in, the holidays all present us with that cultural urge to make some babies. So please, people, enjoy your holiday season, be safe, and BOW CHICKA WOW WOW.