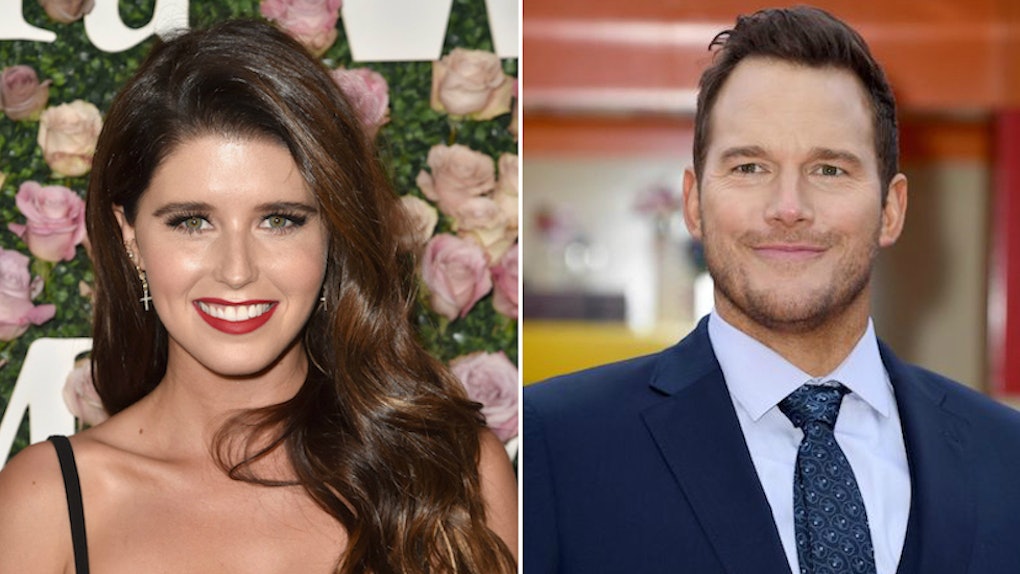 When Are Chris Pratt & Katherine Schwarzenegger Getting Married? Pratt Revealed Some Details

Now that the Super Bowl is behind us, we can finally focus on the real point of February: Romance! It's officially the season of love. Engagement season is winding down, and celebs like Chris Pratt who have recently popped the question are now starting to envision what their big day will look like. Specifically, Pratt and his bride-to-be are apparently narrowing down their wedding date. So, when are Chris Pratt and Katherine Schwarzenegger getting married? According to Pratt himself, they're looking forward to a seasonal celebration.

Fans will remember that Pratt announced his engagement to Schwarzenegger back in January, posting a sweet photo of the two of them on his Instagram. "Sweet Katherine, so happy you said yes!" he wrote. "I’m thrilled to be marrying you. Proud to live boldly in faith with you. Here we go!"

Now, two weeks later, Pratt has revealed that he and Schwarzenegger are looking to tie the knot sooner rather than later. "A little, you know, maybe fall, winter kind of thing and you know, we’ve got a lot to get done," Pratt told Us Weekly while doing press for The Lego Movie 2: The Second Part. He also added that his 6-year-old son, Jack, is "so thrilled" for the wedding, Us Weekly reported.

Us Weekly estimates that according to Pratt's statement, the two might officially become husband and wife anytime between September 2019 and March 2020. Unsurprisingly, the happy couple isn't wasting any time planning their wedding, which makes sense. After the two were spotted together in June 2018, they quickly but quietly grew closer, even spending Halloween together with Pratt's ex-wife, Anna Faris, Faris' new bae, and Faris and Pratt's son, Jack.

Soon after, Pratt reportedly spent Thanksgiving with Schwarzenegger and her family, including mother Maria Shriver, according to People. Pratt first confirmed their relationship with an Instagram post for Schwarzenegger's birthday on Dec. 13, 2018.

"Happy Birthday Chief!" Pratt wrote, alongside an adorable collage of photos featuring Schwarzenegger. "Your smile lights up the room. I’ve cherished our time together. Thrilled God put you in my life. Thankful for the laughs, kisses, talks, hikes, love and care."

Pratt and Schwarzenegger seem very happy together, and Pratt and Faris definitely seem to have co-parenting down, even agreeing to reportedly "live no further than five miles apart from each other until their 6-year-old son Jack completes the sixth grade," according to People. And while some people may find it hard to believe, it truly does seem like everyone is happy, as Faris commented on Pratt's engagement post, saying, "I'm so happy for you both. Congratulations!"

Faris even opened up about her ex's new romance on her podcast, Unqualified, telling listeners, "I knew it was going to happen, and I love her, and I love him, and I’m just so happy they found each other," according to Elle. "I so subscribe to the idea of expanding family and love and with [Pratt's and my son] Jack. She’s awesome."

Now that Pratt has found someone new, and he and Faris are in a good place, there's nothing left to do but eagerly await more details about the happy couple's upcoming nuptials. Based on her Instagram, Schwarzenegger seems to have great style, so their wedding will likely be the event of the year. Congrats to the happy couple!

More like this
When Are Ariana Grande & Dalton Gomez Getting Married? Here's The Reported Tea
By Corinne Sullivan
Madison LeCroy's Reaction To Jennifer Lopez & Alex Rodriguez's Breakup Is Coy
By Corinne Sullivan
Clare Crawley Clapped Back At A Troll Who Said Dale Moss Should Dump Her
By Candice Jalili
Stay up to date