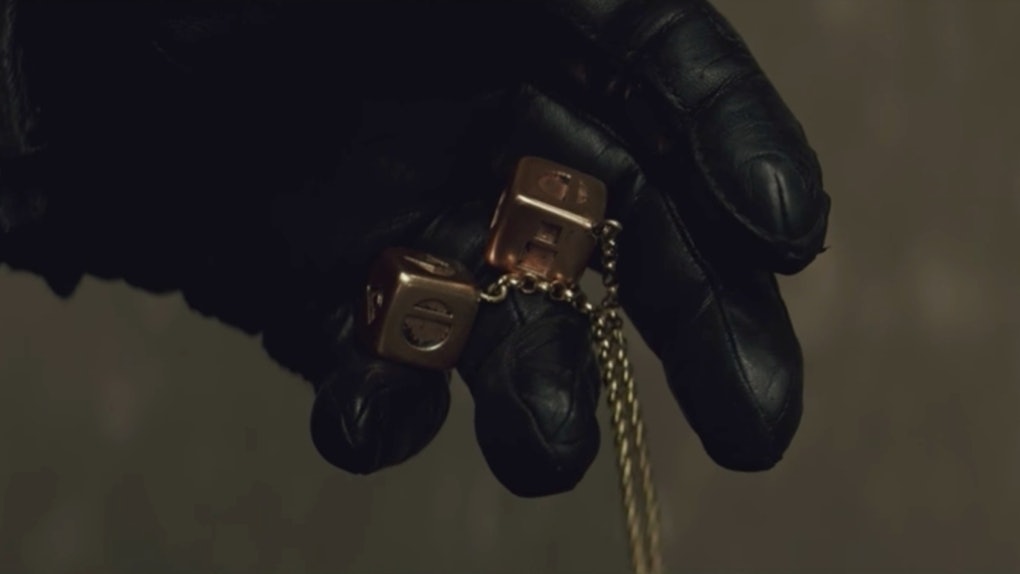 What's The Origin Of Han's Golden Dice? 'Solo: A Star Wars Story' May Give Fans The Answer

Solo: A Star Wars Story promises the story of "Han as a young man" telling us the story of where Star Wars' favorite swashbuckling smuggle came from, how he met Chewbacca, and how he got the Falcon. So far the trailers have given us glimpses of how Han and Lando met and their fateful game of Sabacc, a shot of where Han got his favorite blaster, and maybe even the Kessel Run he made in less than 12 parsecs. But one thing we haven't seen is the origins of Han's Golden Dice, which famously hang from the Falcon's ceiling in Star Wars: A New Hope.

The dice were originally an addition made by the first Star Wars movie's set decorator, Roger Christian. Christian wrote about it in his autobiography, Cinema Alchemist: Designing Star Wars and Alien. He was inspired to hang the dice, much like guys hang dice from their rear-view mirrors in the 1970s, from Harrison Ford's work in George Lucas' previous film, American Graffiti, where his character (who is a direct forerunner to Han Solo) had a skull and crossbones that hung from the rear-view mirror. The skull was "too rock and roll" for Star Wars, so they went with dice.

The irony is the dice were a minor piece of set dressing. If you look closely at the above still from the original film you can see them, but you have to really look. That's partly why they disappeared. For the next two Star Wars films, there was a different set dresser, and the dice were cut. Other than some really hardcore Star Wars fans, the dice were a minor footnote in the series. That is, until Star Wars: The Last Jedi came along.

With Han's death at the end of Star Wars: The Force Awakens, director Rian Johnson had to come up with a sort of shorthand symbol for Luke and Leia grieving over the loss of the first of their trio. He wound up using the dice. Rey hands them to Luke as a symbol that Han is gone. Luke holds them when he reenters the Falcon to silently say goodbye to his old friend. He hands them off to Leia when he says goodbye to her before his showdown with Kylo Ren. And they fade away in Kylo's hand as proof Luke was never there, and that Kylo will never defeat him, or be able to forgive himself for killing his own father.

So now that the dice have taken on such an outsized importance, will Ron Howard follow suit by revealing their origins? It seems like the answer is yes.

First, the dice showed up in the February trailer hanging from... well, exactly where you would expect dice to hang from: The rear-view mirror spot in his speeder.

So has Han always had the dice? It may be they were a gift to him, from his copilot back home: Qi'ra. How do we know? Because along with the second trailer this week, Star Wars has gone full merchandising for Solo, and one of the packages has the following image on it:

Note that this is Qi'ra before her makeover. She's got the same haircut as the shot in the speeder, back when she and Han were just a pair of small-time rebels living on Corellia.

Were the dice a reminder of Qi'ra that Han kept for all those years? Is this perhaps a new retcon explanation for the dice disappearing in Empire Strikes Back and Return of the Jedi, that after meeting and falling for Leia, Han took the dice down, signaling he'd finally moved on?