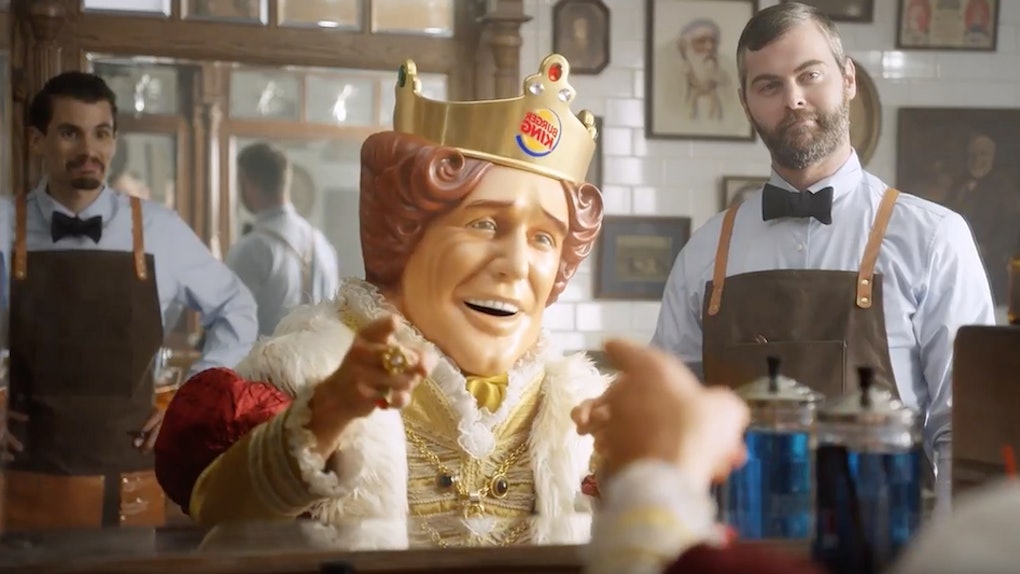 What's The "Movember" Challenge? Burger King's Mascot Changing Up His Look For A Great Cause

It's hard to resist a tasty burger, especially when the restaurant preparing it throws its support behind something noteworthy. In addition to whipping up your favorite meals, Burger King is participating in the Movember challenge to raise awareness for men's health issues. The time has come, and thanks to Burger King's support, it looks like everyone (including mascots) will be sporting a mustache for the cause. So, what's the "Movember" challenge that Burger King's mascot participating in? Let's find out.

The Movember Foundation encourages people to be aware of the dangers of prostate cancer, testicular cancer, mental health issues, and suicide amongst young men. To stand in solidarity with other men, fellas grow mustaches... or in Burger King's case, a "kingstache." The face of BK will sport a 'stache while the company stands alongside the Movember Foundation.

“We are proud to show our support for his cause and hope our guests enjoy watching the King’s mustache transformation throughout the month of November,” Alex Macedo, NorthAmerica, for the Burger King brand said in a statement sent to Elite Daily. Fans can tune in to the King's Movember profile.

Feeling inspired? The King encourages fans to follow his lead with their own mustache, and of course, a selfie. Tag a photo with the hashtag #kingstachechallenge to see people like yourself who are participating in the month-long initiative. If you're wondering how the King of BK looks without his signature beard, have a glimpse at his Movember transformation.

Naturally, the different styles of 'staches were all inspired by Burger King favorites and include the "Whopper Bun" and "Grill Marks." Are you daring enough to try one of these looks? Or will you stick to a normal mustache and just grab a burger?

By 2030, the Movember Foundation states that it will reduce the number of men dying prematurely to 25 percent. So if this is something you want to support, here are a few things to know.

Option 1: You can make a donation.

Head over to the Movember site to either donate directly to the fund or through someone's personal page. The King will have a page of his own, so take a peek. There are plenty of options to choose from if you're looking to send a few bucks this way.

Option 2: You can host a get-together.

The foundation's site allows you to discover possible ways to raise money by way of a fun event — a card night, golf tournament, dinner party, whatever your heart desires.

The best way to stay healthy is through exercise, and the Movember Foundation encourages people to run, swim, or bike together in an effort to raise money for their cause. "Move a little or a lot, solo or in a team. It’s not about being the fittest or the fastest, it’s about havin’ fun, doin’ good, by raising funds along the way," the site reads.

Thanks to BK's silly spin on something serious, more and more people will become aware of the meaning behind the mustache. According to the Movember site,

The state of men’s health is in crisis. Men experience worse longer-term health than women and die on average six years earlier. Prostate cancer rates will double in the next 15 years. Testicular cancer rates have already doubled in the last 50. Three quarters of suicides are men. Poor mental health leads to half a million men taking their own life every year. That’s one every minute.

Our fathers, brothers, boyfriends, husbands, uncles, friends, and so on need our attention. November is in full swing, and it's time to make sure everyone knows about Movember.