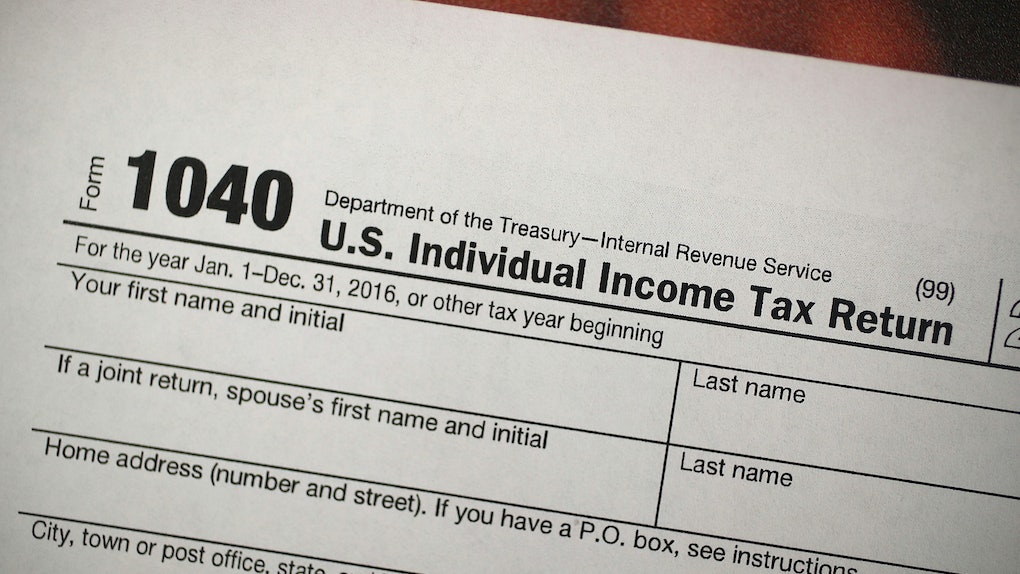 What's The Deadline To Pay Your Taxes? It All Comes Bundled Together

Tax time is here, again! This means you're either jumping up and down at the thought of a refund check heading your way, or you're dreading the fact that you'll likely owe money and will have to pay the government back. If you relate to the latter, you're probably wondering what the deadline is to pay your taxes. And honestly, the date is pretty easy to remember.

This year, you are required to pay your taxes on the same day they're due: April 15, according to the financial advice website The Balance. If you're in a bind and this seems totally impossible, though (millennial probs), there's at least one option available that gives you some extra time to make your payment.

You can get a Form 4868: Application for Automatic Extension of Time To File, which gives you six months worth of breathing room, as long as the form is postmarked on or before April 15. With the extension, you'll have up until Oct. 15 to pay your penalties. See, Uncle Sam has got your back. For more details on this, H&R Block has some pretty insightful information on its website. Head here to check it out.

Curious about how much you might owe? There are tons of free tax calculators out there that can provide you with a ballpark idea of how much you'll have to pay back. Who knows, maybe you won't end up owing as much as you thought. Try this one from H&R Block.

But be advised: You're not actually able to file taxes just yet. The Internal Revenue Service (IRS) won't start accepting returns until Jan. 28, so you've got a little extra time to figure out your next steps.

Previously, it was unclear whether people would be able to file at all — y'know, with the government shutdown and all. The Trump administration previously said returns wouldn't be given out as long as the shutdown was in effect. Thankfully for all of us, the White House doubled back, announcing that it gave the IRS the OK to accept tax returns and issue refunds. But then reports surfaced saying that there were concerns that IRS employees, forced to work without pay during the shutdown, would stop showing up, which would stall the process.

Then on Jan. 25, a miracle basically happened: President Trump agreed to end the historic shutdown, which stretched longer than one month and was precipitated by a fight between Trump and Congress over funding for a wall at the United States southern border. In his remarks, the president said the government would reopen "immediately," which means people should be happier than ever to get back to work and that we should be in the clear to start the tax process. Elite Daily reached out to the White House for further comment on Trump's remarks at the time, but did not hear back by the time of publication.

Get on your marks, friends. Tax time is upon us and, regardless of whether you'll owe money or not, the faster you get your taxes filed, the sooner this will all be over.

More like this
What's In Kellogg's & GLAAD's Together With Pride Cereal? Expect Berry Flavors
By Daffany Chan
These Unique Gifts For Moms Are A Change Of Pace From A Bouquet Of Flowers
By Cianna Garrison
Angry Orchard's Peach Mango & Strawberry Hard Cider Flavors Are Twists On A Classic
By Daffany Chan
Stay up to date