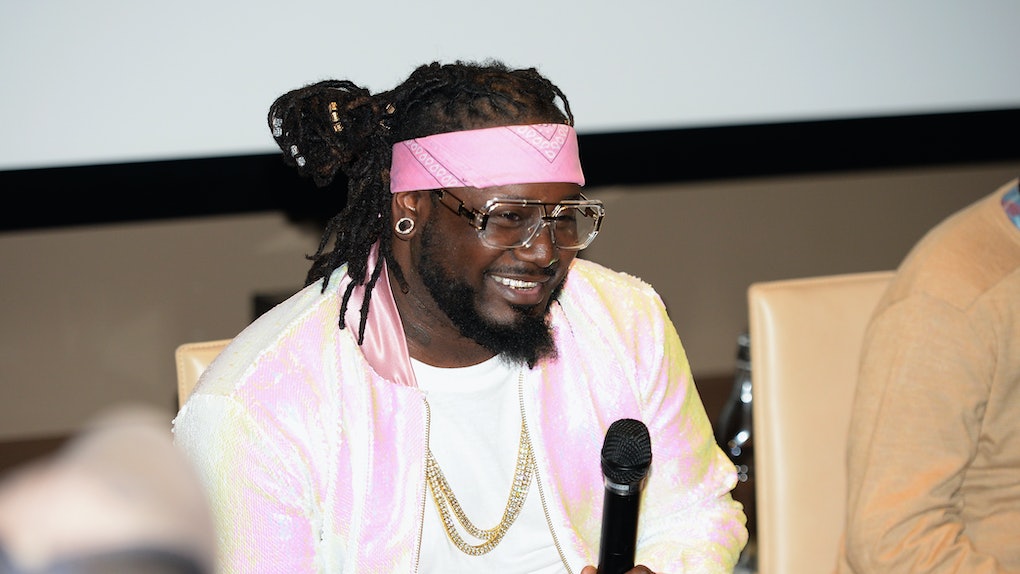 What's T-Pain Up To? The Genius Who Made Auto-Tune Cool Is Having A Major Comeback

If you watched The Masked Singer, then you know that TV's biggest mystery since we found out that Dan Humphrey was Gossip Girl back in 2012 was finally solved when the show's first winner stripped off his blue monster costume to reveal that the man behind the voice was — *drumroll, please* — T-Pain. The Grammy-winning hip hop artist credited with making auto-tune a thing beat out other semi-finalists and pop icons like Gladys Knight, Donny Osmond, and Joey Fatone to take home the big prize. It was all quite amazing. But the show was actually shot last year. So, what's T-Pain up to other than slaying it on music competition shows?

Well, for starters, he's hosting this year's iHeartRadio Music Awards, which will air live from the Microsoft Theater in Los Angeles on Fox, on iHeartMedia's radio stations and on its streaming radio service on Thursday, March 14 at 9 p.m. ET.

Nice gig if you can get it, right?

"The blessings keep rolling in," T-Pain said in a statement. "I am grateful and honored to host this year's iHeartRadio Music Awards. The past two weeks have been incredible and the run continues. Thank you to everyone for all of the love and support. A special thanks to the iHeart team and Fox for having me."

The hip hop and R&B star also surprised his fans by dropping a new album called 1UP, which he announced on Instagram just ahead of The Masked Singer finale on Feb. 27.

"Surprise!!!" T-Pain wrote in the caption of his post. "Thank you guys for being so patient with me...it was worth the wait, we got a new album out!!!!! I did this independently and I can’t wait for ya’ll to finally hear it. 1UP is officially out now!!!! Link in bio to listen, luv to all of you."

1UP boasts 12 new tracks — including "Getcha Roll On" and "All I Want," which have both already been getting some radio play — plus contributions from Tory Lanez, O.T. Genasis, Flipp Dinero, and Lil Wayne.

T-Pain will also go on tour in support of the new album. The first concert kicks off on March 16 in San Antonio, Texas, and he's got 14 other shows scheduled all over the country through the beginning of April.

As if his plate wasn't already full enough, let's not forget that the "Buy U A Drank" rapper launched his own reality show, T-Pain's House of Business, on the FUSE channel back in October 2018 and he's currently hard at work on Season 2.

As part of the show, T-Pain visits small businesses — like a marijuana-infused wine company and a vegan ramen producer — and helps them get off the ground.

The show is a no-brainer for T-Pain, who's owned his own Nappy Boy Entertainment label for more than a decade, and who dropped a clothing line called Wiscansin University last year based entirely off one of his more memorable attempts at a rhyme from his 2008 single "I Can’t Believe It":

I can put you in a mansion, somewhere in Wiscansin.

Of course, I don't think anything will ever top T-Pain's legendary cover of Lenny Kravitz' "American Woman" while still dressed up as that one-eyed blue monster, so I'm just gonna go ahead and leave this here: