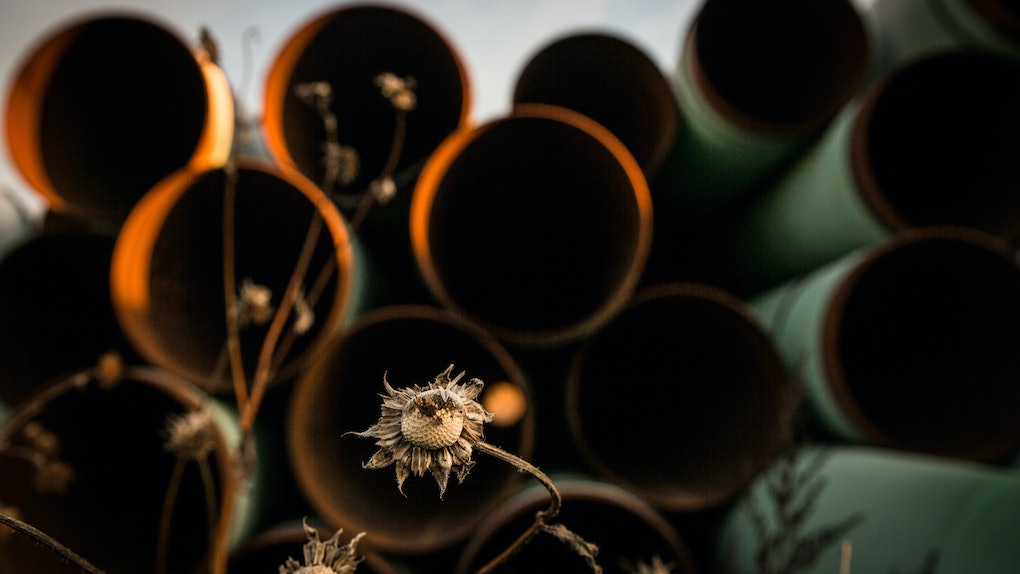 One of the most hard-fought environmental battles of the last decade just saw a huge development. Regulators approved the Keystone XL pipeline's latest hurdle in Nebraska, clearing the path to move forward, on Monday, Nov. 20. The decision by Nebraska commissioners puts the company TransCanada one huge step closer to building its international pipeline.

Monday's decision represents the last big hurdle needed to clear the path for the pipeline, which has been locked in a controversial back-and-forth for the last nine years. The pipeline has suffered multiple defeats by former President Barack Obama, but President Donald Trump has made steps to undo that. The pipeline, which would also cross through South Dakota and Montana, has already gotten approval from regulators in those states, so with Nebraska's yes, all three states are on board to move ahead. The pipeline will expand to the existing Keystone pipeline, which runs from Alberta, Canada through Texas's Gulf Coast.

On a 3-2 vote, the Washington Post reports, the Nebraska Public Service Commission approved the $8 billion project on Monday, Nov. 20. The approved route, potentially supporting the transport of 830,000 gallons of oil per day, wasn't the one TransCanada was hoping for, however. The route commissioners approved was set further east, to avoid regions that are of ecological concern.

According to the Post, Chrystal Rhoades, who represented one of the opposing votes, wrote, "All human-made infrastructure degrades and fails over time." She added, "No infrastructure ever designed has lasted for eternity and there is no reason to believe this pipeline will be an exception." Responding to TransCanada's claims that the pipeline will be an economic engine producing jobs, Rhoades said, "there was no evidence provided that any jobs created by the construction of this project would be given to Nebraska residents."

The decision comes just a week after a pipeline by the same company spilled over 200,000 gallons of oil.

This news is good timing politically for Trump, who is in need of a win in sticking to his campaign promises. The Keystone XL pipeline has long been one of Trump's signature platform pieces alongside the Mexico border wall and bringing back manufacturing jobs. He railed against Obama's initial denial of a permit for the project back in 2012, calling it "disgraceful" and saying it "is not an environmental problem, at all, in any way, shape, or form." In 2015, Obama again shut down TransCanada's application to build.

Back at a speech in North Dakota in May 2016, Politico reports, Trump said of the pipeline, "I want it built, but I want a piece of the profits ... That's how we're going to make our country rich again."

In May of this year, Trump gave the go-ahead to start buildling the pipeline, making good on a January executive order promising tens of thousands of jobs that the pipeline would create.

And the opposition to the project extends well beyond the two no votes. As with the North Dakota Access pipeline, which encountered months of grueling protest, the Keystone XL has long been a battle fought tooth and nail by environmental activists.

Environmentalists are concerned about the impacts that pipelines have on the land they cover. In particular, environmentally damaging spillage, toxicity from the chemicals, and an increased carbon footprint are all among the most prominent reasons cited. As a study showed, just since 2010, nearly 9 million gallons of oil have been spilled as a result of pipeline leaks in the U.S.

While the Keystone pipline already exists, the extension, groups argue, would expose more land and populations to risk. There is also concern for the impact the pipeline extension would pose on native populations, who Rhoades said were not consulted in the process.

It's unclear what the timeline for the Keystone XL is after Monday's approval, but the decision is expected to face an appeal from groups fighting it.