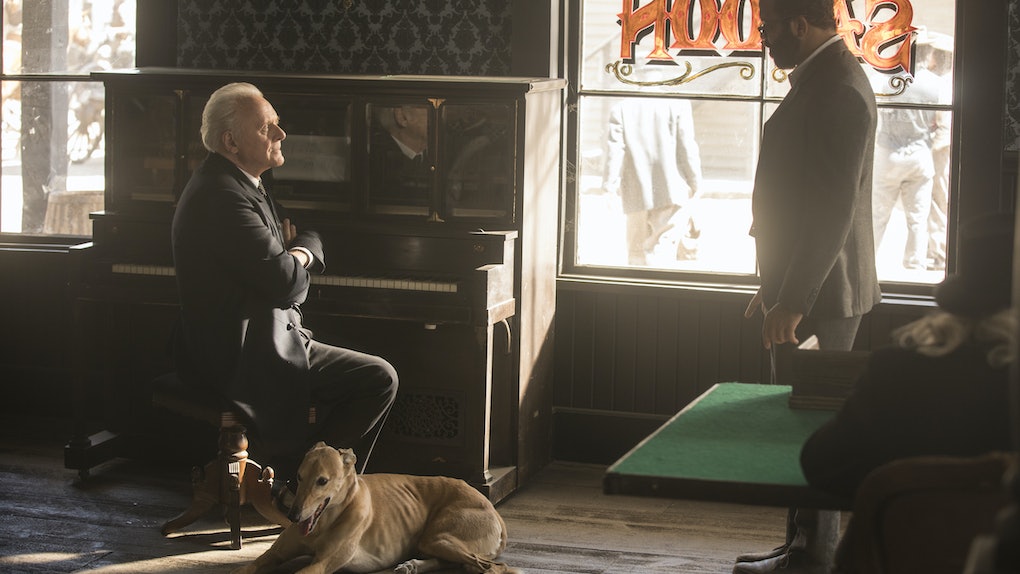 What's Happening With Bernard? Ford Has Taken Over His Mind In 'Westworld' Season 2

Last week's episode of Westworld was a complete shocker. The showrunners swore up and down this season Robert Ford was dead, and Anthony Hopkins was off the show, except for a few lines spoken off-screen. Turns out, that was just a lie. Ford's body may be dead, but as fans have theorized, he did have a backup copy of his entire mind made, and now it's Bernard's problem. But what's happening with Bernard this week is terrible. Warning: Spoilers for Westworld Season 2 follow.

Let's recap what the show has told viewers over the course of the season about creating copies of real people. In Episode 4, the series revealed this was a project William started once James Delos retired, and he was the guinea pig, going into a panopticon room to have his every move and thought recorded, then inserted into a host, in hopes this would result in a perfect copy of the person in question.

But it didn't work. Even after 25 years or so of tests, after only a few days the host body would reject the mind, for reasons not totally explained. It's suggested the human experience was simply too complex for the host to handle, but no one says it directly.

At the end of last week, Bernard entered the CR4-DL (cradle), the virtual reality simulator where every host mind is backed up, and all future hosts and storylines are beta tested before entering the real world. He entered it by having his data chip (which looks like a black marble) extracted from it's "brain muffin" housing and put directly into the virtual simulator.

Once inside, he discovered Ford. It turns out the red marble he recalled making was Ford's data chip. Ford knew he couldn't survive inside a host's body as his whole self, so he had Bernard put him in the cradle, because the simulator could handle it. From there, he's been manipulating security and blocking the humans from accessing things, in order to allow Dolores and company to keep the upper hand.

Bernard discovers he's been inside the cradle before as well. There's a replica of Arnold's house in the cradle, where Ford spent years beta-testing Bernard with Dolores' VR copy's help, until he had a version of Arnold which "fooled even her" but was still slimmed down enough in the "human experience" to work inside a host without melting down, unlike William and James Delos.

But considering the way things are going, Ford has decided he can no longer sit on the sidelines. He informs Bernard he's going to have to "take back that free will." Besides, the hosts are coming, and they are about the blow the cradle and all their backups to smithereens, in order to ensure Charlotte Hale and company won't be able to resurrect them when this is all over.

When Bernard's black marble is spat out of the machine and reinserted into his head, it turns out it's not just Bernard who came back.

As Bernard and Elsie hurry to escape the cradle ahead of the oncoming hosts, Bernard catches a glimpse of himself in the glass walls. It's not his reflection looking back. It's Ford, who came with him. And Ford is now in control of Bernard's every move, getting him to dismiss Elsie so he can follow orders more freely. Ford forces him to murder Delos security too, even as Bernard begs him to stop.

This puts a heck of a twist on Charlotte's discovery of the multiple Bernard host bodies at the top of the episode. In the final minutes, the show returns to her extracting information from Bernard, asking where Peter Abernathy's brain is, and getting an answer. Is she actually interrogating the real Bernard? Or is Ford the one answering her questions, still pulling the strings of his puppet?