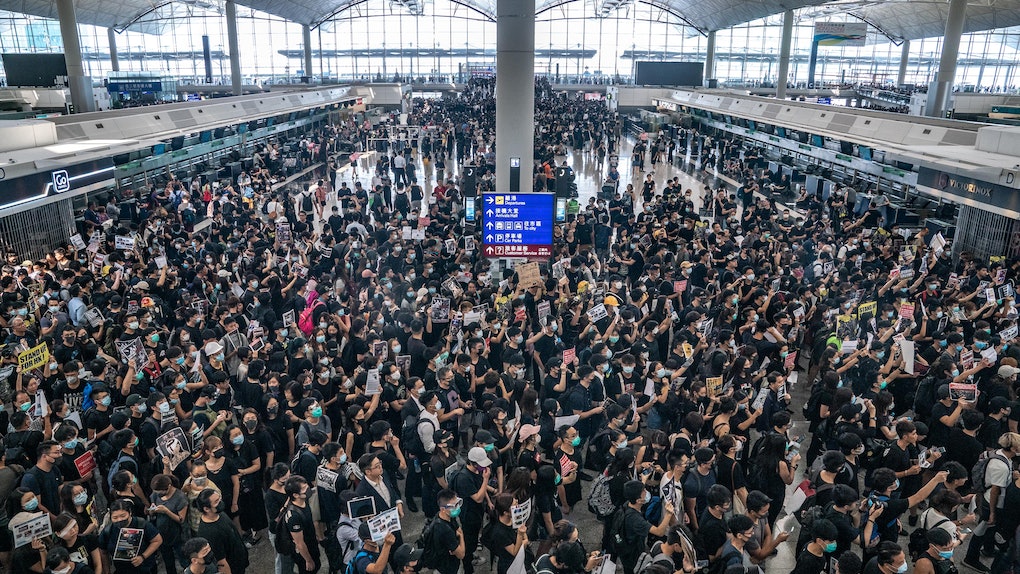 What's Happening In Hong Kong? Here's Why People Are Protesting

Even if you don't fly through Hong Kong, you've probably heard by now: Sweeping protests in Hong Kong resulted in hundreds of flights being canceled this week, at one of the world's busiest airports. But these protests aren't new. In fact, millions of people have taken to Hong Kong's streets since March 2019 to protest a controversial extradition bill, and the protests have been getting more intense by the day. If you're wondering about what's happening in Hong Kong, the demonstrators' key demands may clarify why they are still protesting.

In recent months, demonstrators in Hong Kong have been protesting against their chief executive, an unpopular extradition bill, and alleged excessive force by police, all while demanding increased voting rights and autonomy. These protests started earlier this year, following the introduction of the extradition bill.

In February 2019, Hong Kong’s Security Bureau proposed changes to regional extradition laws that would allow people to be extradited from Hong Kong to mainland China, Reuters reported. According to The New York Times, Hong Kong's chief executive, Carrie Lam, initially called for the bill's passage in order to prosecute a man from Hong Kong who was wanted in Taiwan for the alleged murder of his pregnant girlfriend (The man later confessed to police and in April was sentenced by a Hong Kong court to 29 months in prison, per the Times). Lam's government officially introduced amendments to Hong Kong's extradition laws on April 3, per Reuters, and she and her fellow legislators argued at the time that the bill would make it possible for Hong Kong to transfer criminal suspects to Taiwan. Hong Kong, though technically part of China, maintains a semi-autonomous relationship, while Taiwan's status as either a sovereign state or a territory of China is a source of political debate.

However, the proposed bill would also enable extradition from Hong Kong to mainland China, the BBC reported, prompting widespread concern from Hong Kong residents. The bill's opponents warned that political activists who were critical of Beijing could become targets of the bill, and that criminal suspects would not be the only ones facing extradition. In March and April, not long after the extradition law changes were proposed, tens of thousands of protesters took to the streets of Hong Kong to demand that the proposed bill be rescinded.

According to Reuters, both the United States and European Union warned Hong Kong officials to stop pursuing the extradition bill. But despite this international scrutiny and subsequent protests, Lam continued to insist in May that her government would pass the bill. In Hong Kong, lawmakers clashed over the bill, with pro-democracy factions vehemently opposing it. On May 30, Lam's government proposed additional changes to the bill that would narrow down the offenses for which an individual could be extradited, but this was not enough to quell the protests. In fact, the month of June saw these protests escalate to include police headquarter blockades and up to two million participants, according to organizers.

To understand exactly why so many people are protesting in Hong Kong, we need to go all the way back to 1997, when Britain "handed" all of Hong Kong to China. Although Britain transferred its sovereignty of Hong Kong, however, Hong Kong nonetheless maintained some institutions that were separate from mainland China, such as its own legislature and an independent judiciary. This framework, known as "one country, two systems," has existed for 22 years, but protesters in Hong Kong are worried that the proposed changes to the extradition bill would give Beijing greater influence over the region.

So in June, hundreds of thousands — if not millions — of Hong Kong residents participated in protests against the extradition bill. These protests escalated even further in mid-June, when Hong Kong police fired rubber bullets and tear gas at protesters, per the Associated Press. After this escalation of protests and violence, Lam announced on June 14 that she was indefinitely suspending the extradition bill, The New York Times reported. However, Lam also said that she was not withdrawing the bill entirely, suggesting at a news conference that her government had wrongly gone about convincing the population of the bill's necessity.

A few days later, on June 18, Lam announced that she would not step down and she again refused to withdraw the bill, but she did apologize for promoting it and indicated that she would not directly re-introduce it if protests continued. “After this incident, I think work in the next three years will be very difficult," Lam told reporters, "but myself and my team will work harder to rebuild public confidence.”

But by that point, Lam's remarks did nothing to reassure protesters. Instead, the protests continued through June and July, and demonstrators called for Lam's resignation as well as an investigation into whether Hong Kong police had used excessive force to stop the protests. Commissioner of Police Stephen Lo Wai-chung said in June 2019 that his officers had "rightfully used force to protect themselves" at the protests, per the South China Morning Post.

In August 2019, protesters began to occupy and effectively shut down the Hong Kong airport, prompting officials to cancel many flights. The protests were initially peaceful, The New York Times reported, but escalated on Aug. 13, when some scuffles reportedly broke out between protesters and travelers. On Aug. 14, some protesters apologized for the aggression via the encrypted messaging app Telegram, saying that they "are just too scared" after learning that Hong Kong police had allegedly posed undercover as fellow demonstrators.

According to The Guardian, protesters have several key demands as their efforts continue:

Only a few dozen protesters remained at Hong Kong's airport as of Wednesday morning, per The New York Times, though CNN reported that the protests in Hong Kong are certainly not over. In the coming days, protesters are expected to continue pursuing their demands.