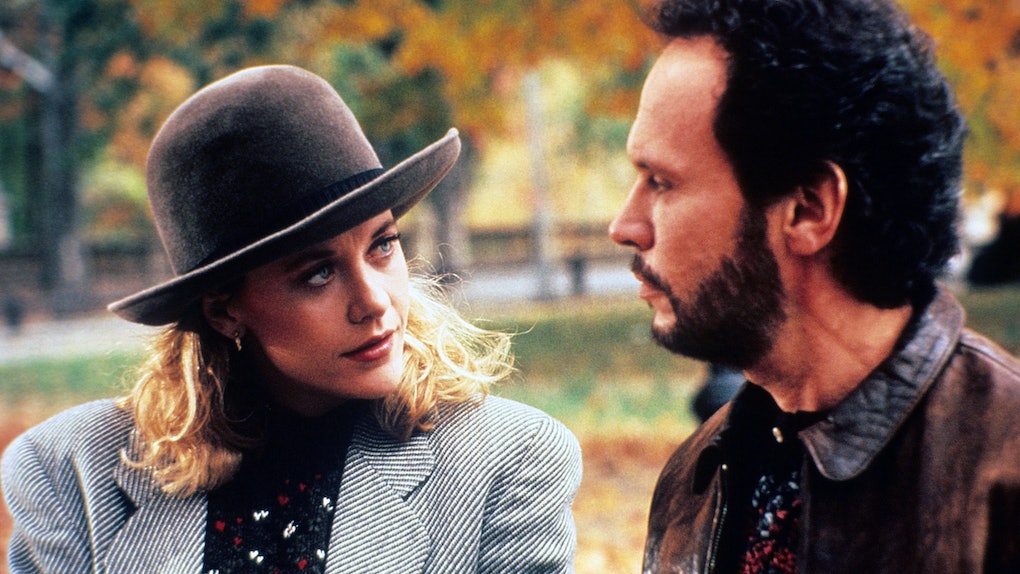 What Your Favorite Rom-Com Reveals About Your Relationship, So Hit Play

OK, I'll admit it. I would pay so much money to see what historians of the future will have to say about one of my favorite parts of pop culture: rom-coms. In fact, I believe there is quite a lot to learn from exploring what your favorite rom-com reveals about your relationship. After all, these films are packed with different themes, morals, and values. So, it makes a lot of sense that your favorite romantic comedy could say quite a bit about your IRL relationship.

There are many iconic rom-coms that are remembered for particularly funny or sentimental moments. Think about that scene in When Harry Met Sally where Harry (played by Billy Crystal) gets his penis stuck in the zipper of his prom suit. Or the iconic "foot-popping" kiss in The Princess Diaries and the way John Cusack stands outside Ione Skye's window with a boombox on his shoulder in Say Anything... Aside from inspiring memes and laughs, these singular scenes have a unique message about the love and relationships of their main characters. Each rom-com has its own core message about love, and your favorite could reflect a lot about your relationship.

When you try to conjure up some of your favorite rom-coms, what comes up for you? See if any of the following movies appeared in your mind's reel and what it could mean for you and bae.

If You Adore 'My Big Fat Greek Wedding'...

I don't know about you, but my friends and I watched this at almost every sleepover we had growing up. The best part of this movie, IMHO, is when the main character, Toula Portokaulos (played by Nia Vardalos), decides to branch out of her comfort zone. When she gets a new job, experiments with her style, and signs up for classes to learn about computers, she actually ends up meeting her future husband.

If this is you and your SO's favorite movie, you probably met in a way that surprised you both. It's a testament to how life can throw you random curveballs.

ICYMI, this epic flick is about Journalist Andie Anderson (played by Kate Hudson), who attempts to write a column about how to lose a guy in 10 days. At the end of the movie, she does not, in fact, lose the guy. She instead falls pretty dang hard for him. This movie is all about rethinking the roles one is expected to play in a romantic relationship.

If you love this film, it's probably because you and your partner understand that some romantic clichés aren't for you. You and bae probably respect that you're on your own timeline. However, you might also have a soft spot for romantic traditions, like being given a dozen roses or sharing a candlelit dinner.

If You're Obsessed With 'To All The Boys I've Loved Before'...

This movie is one of the sweetest depictions of two people falling for each other when they least expected it. When Lara Jean (played by Lana Condor) finds out that her younger sister sent out all the secret love letters that she had written to crushes over the years, she understandably freaks out. She then creates a deal with Peter Kavinsky (played by Noah Centineo) to fake-date each other for a portion of the school year. This is a mutually beneficial deal because it keeps everyone from finding out that Lara Jean was in love with her sister's ex-boyfriend, while simultaneously making Kavinksy's ex-girlfriend hella jealous. Eventually, their pretend relationship takes a turn towards the real thing.

If you and bae love this movie, you might have been friends for a while before falling for each other. This rom-com is all about opening your eyes to who is standing right in front of you.

The Big Sick is actually a true story about how comedian and writer Kumail Nanjiani met his wife. Shortly after getting to know her, he was subsequently rejected by her parents during a bout of deathly illness that rendered her unconscious — unbelievable, I know.

If this is your favorite rom-com to watch with your sweetheart, don't worry — it doesn't mean that you met under near-death circumstances. It could, however, mean that you resonate with the idea of sharing cultural differences with your boo. But this movie is a nod to the notion that love brings people together.

If You Appreciate 'Love, Simon'...

In Love, Simon, the main character falls for an anonymous classmate online. This teen rom-com is a super sweet and important representation of the LGBTQIA community. There's definitely a lot to love.

If you are obsessed with this movie, you might have met your partner online, too. Meeting online in 2019 is certainly common, but it's definitely an origin story that you should still honor and celebrate. Perhaps you like this particular film because you and your SO also took a while to meet IRL. Maybe you took your time getting to know each other via Insta DMs or a dating app, and your bond is all the more special as a result.

This classic rom-com is honestly so special. Throughout the main characters' turbulent romance, the one constant is that you know it's all a part of their larger story.

If this is your favorite rom-com with your partner, you probably love the way the narrative zooms in on those special moments (like when they slow dance in the middle of the street). Loving this particular film could mean that you and bae are sappy romantics at heart. You believe in soulmates, and you are suckers for the "if you're a bird, I'm a bird" scene. Ultimately, you are deeply in love, and this movie reminds you of both your path, present, and future with your partner.

My favorite thing about Love and Basketball is that the film depicts two people evolving over the years, who slowly realize how they feel about each other over time.

If this is your favorite rom-com, you might find the nostalgia to be super familiar. I would bet that you met your partner a long, long time ago, and watching this film may remind you of how you fell in love. You live for the slow evolution of their relationship from neighbors to lovers, because the two of you had a slow burn as well. Maybe you were coworkers, classmates, sorority sisters, roommates, or neighbors, then slowly became so much more to each other.

IMHO, About Time is one of the most under-appreciated rom-coms of the 2010s. This movie is all about the precious nature of time, family, and relationships.

If you and your love are really into this movie, you probably appreciate the little things in life. You treasure the moments in the morning when one of you makes coffee or watching your partner get ready for work. Life is full of so many minute joys, and you both don't take those for granted

Much like smoothies with spinach that you can't taste, rom-coms have so many morals and life lessons packed into them. Realizing that you and your partner gravitate towards a certain film can teach you a lot about the values of your relationship. So pop that popcorn and pick out your favorite candy, then settle in for your movie date night.