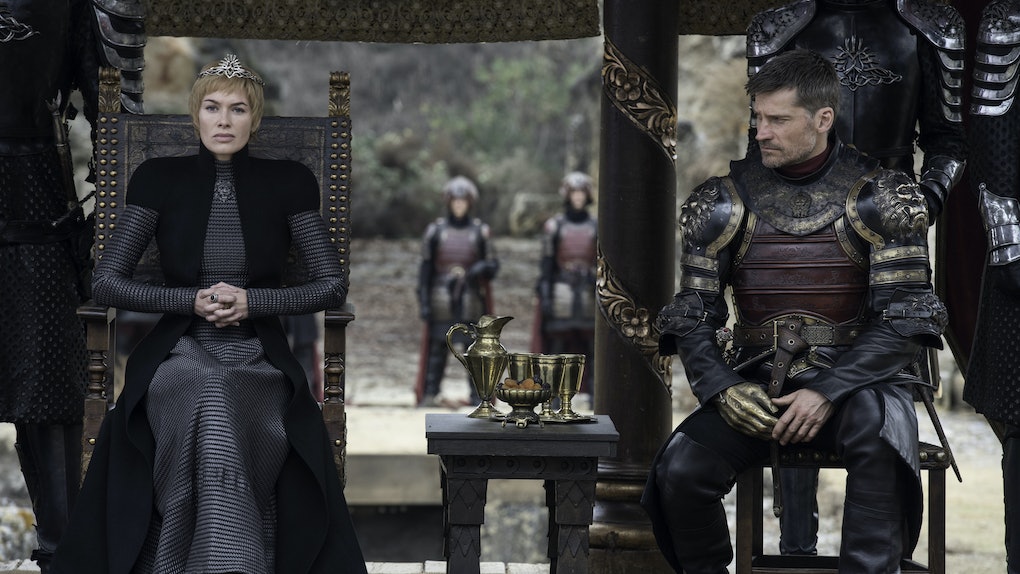 What Will Happen To Cersei's Baby On 'Game Of Thrones'? Here's A New Theory

Filming for Game of Thrones Season 8 went very differently from Season 7. Not only was Season 7 filmed in places where security couldn't be tight enough to stop onlookers, but all of the script points were leaked early on so fans could identify which scenes they saw filmed and when it happened in the show's timeline. Season 8, on the other hand, has been practically locked down in comparison. This has left spoiler hounds desperate for any information. This is especially true for dangling plot threads, like Cersei's baby on Game Of Thrones Season 7. Is she really having one?

There's an entire subset of viewers who believe Cersei isn't pregnant. They think she's lying, telling Jaime she is carrying their child to manipulate him into staying with her and fighting on her side.

There's just one small problem with this theory. Remember those spoilers for Season 7 I mentioned above? They laid out all seven episodes point-for-point and every last scene described within came to pass, from Arya's scene with the Freys, to Viserion's death, to the boat sex, to the Wall collapsing.

Everything, save one. According to those script leaks, Cersei supposedly miscarries at the end of the season. She didn't. The scene was cut. But it proves one thing. If Cersei was supposed to miscarry, this means her pregnancy is real.

The problem for the show is babies take a long time in the oven. Time in Season 7 was treated as a somewhat fluid thing (see also: Gendry's magical run to the Wall). But there's fudging how long it takes for Arya to get from Essos to the Twins to kill the Freys, and then there's attempting to fudge human pregnancy. Proper baking times are essential for human gestation. And the Night King isn't going to take two trimesters to get from the Wall to Winterfell and then down to King's Landing.

But even if the child realistically cannot be born until the very end of the season, Cersei's baby has an important role to play. So long as the child is in her womb, she is going to do everything she can to protect it, especially now that Dad's walked out. What happens if the battle of Winterfell goes badly, the Night King wins, and suddenly Cersei is the Army of the Dead's Public Enemy Number One? Perhaps, finally, Cersei will come to her senses and stand against the forces of the dead.

Nikolaj Coster-Waldau recently gave an interview to Huffington Post, suggesting he might not ever get to Winterfell. If he makes it to the Crossroads Inn and finds out the battle is joined, he might turn around and head back home to protect Cersei, protecting her so their child can be born.

Coster Waldau also says offhandedly, "The Lannister kids made it to the end." Could he and Cersei be the ones standing in the last battle along with the remnants of Dany and Jon's army? Will the proverbial "dream of spring" of Martin's last novel include the next generation of Lannisters, Cersei and Jaime's last-born child?

Fans will find out when the final season of Game of Thrones arrives on HBO in 2019.