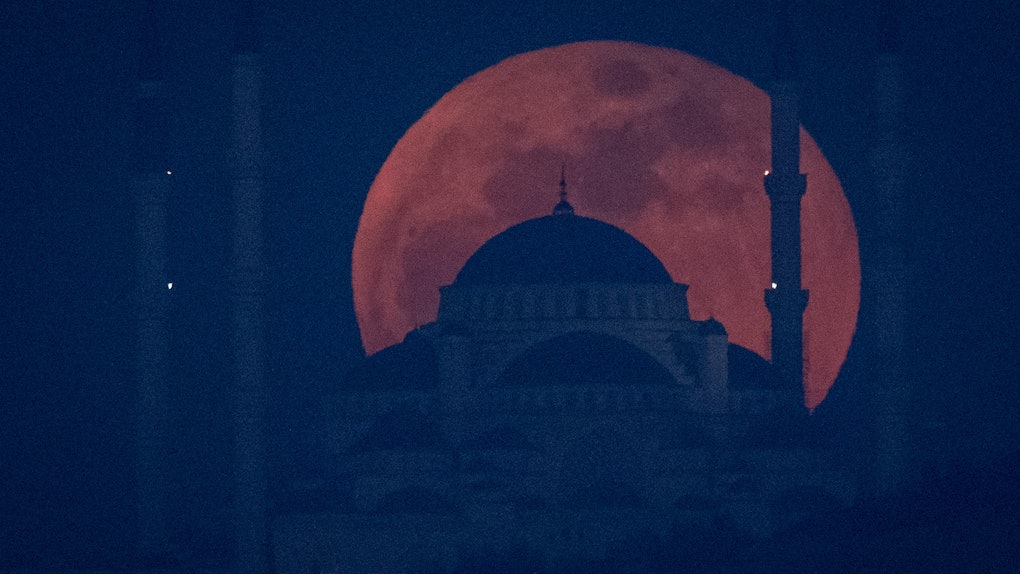 What Time Will The Blood Moon Eclipse Happen? How To Plan For The Lunar Showdown

It's time for all you modern witches to gather for a coven meeting and absorb immense power from the upcoming blood moon. And, well, if witchcraft isn't your thing, then you're probably just wondering what time will the blood moon eclipse happen on July 27? After all, even muggles can't argue that a lunar eclipse is one hell of a good reason to pull out the telescope and watch in amazement as the moon turns red.

However, before we get to the time of day that the lunar eclipse will occur, it's important that we establish whether or not you'll actually be able to see it. According to Space.com, the blood moon will only make an appearance for people in Africa, Australia, the Middle East, southern Asia, and the Indian Ocean. If you're like me and you live thousands of miles away from any of these locations, I'm sorry to disappoint you, but seeing the lunar eclipse in person is probably out of the cards. Don't let that disappoint you too much though, because spiritually speaking, the time in which the lunar eclipse will bloody our night sky still has some serious magnitude. After all, it is the longest total lunar eclipse of the century so far, and it launches an incredible transformation within us all. It's also the moment where you can begin live streaming the lunar event at home.

Whether the lunar eclipse will cast its eerie glow across your world or not, the moon will begin turning red at 3:30 p.m. EST, reaching its fullest eclipse at 4:21 p.m. EST, and return back to normal at 5:13 p.m. EST, according to Space.com. If you add everything up, that comes to an astounding 103 minutes of pure blood moon action.

If you're still mourning the fact that some of you will have to put your dreams of gazing up at an eclipsed night sky to rest, you still have alternative viewing options. Although it won't be anywhere near as magical as seeing the lunar eclipse in real life, you can live stream it here at TimeAndDate.com. Obviously, it's the next best thing, and thanks to technology, none of us have a reason to miss out on the lunar amazement.

However, if screens aren't really your thing, know that the lunar eclipse is still affecting you, even if you aren't able to see it with your own two eyes. In this case, seeing is definitely not believing, especially when a blood moon is the harbinger of intense, overwhelming, and dynamic change in astrology.

A lunar eclipse is essentially the usual power of a full moon, but amplified. When a full moon bursts through our world, it announces culmination, fruition, reward, and revelation. All month long, you've been working with the intentions you set on the cleansing new moon, and by the time the full moon takes place, you get to see what all your hard work has resulted in. Maybe it announces an uncomfortable moment of truth. Perhaps it arrives bearing gifts and accolades. Regardless, there's no way you'll go back to being the same person you were before the blood moon.

With a lunar eclipse in Aquarius, the "water bearer" air sign that contains fixed energy, the changes will happen on both a grand and individual scale. This zodiac sign rules over the 11th house of community and friendship, making humanity and unity of great concern to an Aquarius. Known for individuality as much as they are for cooperation, this lunar eclipse will encourage you to become an even more genuine version of yourself. As you shed the baggage in your life standing in the way of your fullest potential, you're also making the world a far better place. After all, there was a reason you were put on this planet, and the blood moon in Aquarius knows that better than anyone.