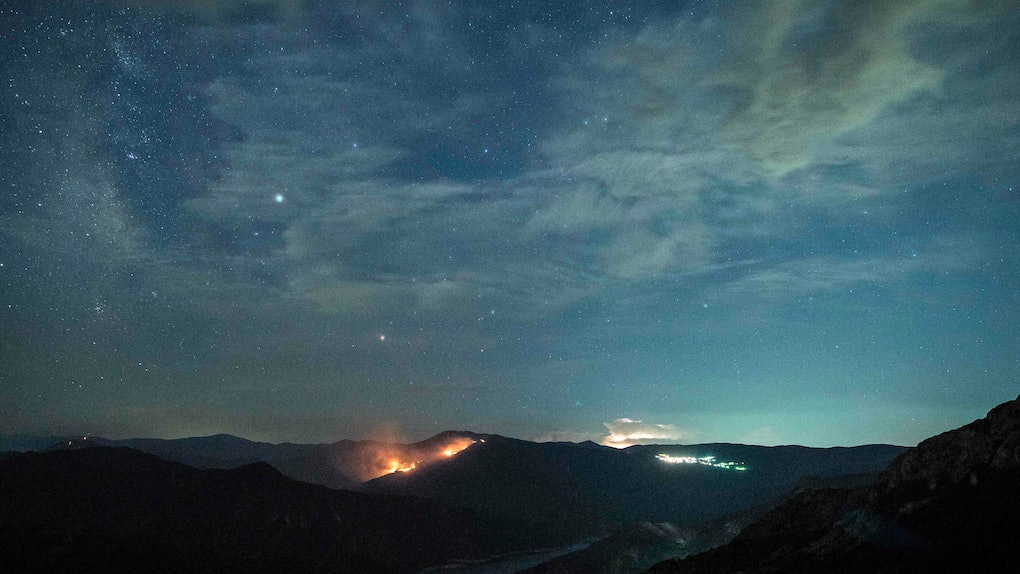 What Time Is The Orionid Meteor Shower This Weekend? Here's When You Should Head Outside

It's no secret that over here I'm completely obsessed with everything under the sun — you know, like the stars, the moon, planets, and of course, their relationship with each other. I honestly can't help but roll my eyes at anyone who says astrology isn't real — cough, Bill Nye the science guy, cough — and I don't care if you are a "scientist." How do I know astrology is real? Well, because who am I to tell the moon and the stars that they don't matter? Also, I'm a born Aries (yep, that's a #humblebrag) and the description fits me to a T. And believer or not, there are some spacey sights that never fail to unite astrologers and skeptics alike. A few months ago, the solar eclipse sent millions of Americans outside to catch the once-in-a-lifetime occurrence, and tonight, Oct. 20, we'll have the Orionid meteor shower. So what time is the Orionid meteor shower? Read on, because you won't want to miss the dazzling display in the sky.

The Orionid meteor shower only occurs once a year, and it's completely safe to look at with just your eyes and no protection. According to USA Today, this shower is such a special sight because it's completely made up of stars that also make up Halley's Comet. The individual shooting stars happening together at once make it a unique sight. Lucky for us star-gazers, the moon will only be about 1 percent illuminated tonight, as the moon will be in its waxing crescent phrase, which means there'll be plenty of room in the sky for Orionid to shine. According to AZ Central, bright city lights won't completely inhibit your ability to see the meteor shower, but if you're hoping to catch a glimpse, you should try to get to a rooftop in a direction with the least amount of bright lights possible. You don't need binoculars at all to see the shower, and thank god, because who has ever stumbled across a pair of binoculars unless you were forced to clean out your parents' attic while you were home for the holidays?

The Orionid meteor shower is named after the constellation, Orion. In Greek mythology, Orion is a hunter and the son of Poseidon which gave him the talent of walking on water. I wish there was a heroic tale I could tell you all here to inspire you, but according to Greek literature, Orion once got drunk and violated a woman, who's father ended up blinding him. Helios, the sun, healed him, and for some reason Orion went back to the father of his victim and tried to punish him even though Orion is really the troublemaker here. Eventually Orion grew so manic, he threatened to kill "every beast" on earth, and Mother Earth was like hells no, and got a scorpion to kill him. Then Zeus placed him in the sky as a constellation.

With a week filled with news about women's powerful take down in response to allegations against Harvey Weinstein, and our president being served a subpoena for his part in sexual assault allegations, maybe the timing of Orionid serves to reinforce the idea that women are powerful and we are not in the business of taking sh*t from anyone.

So What Time Exactly Should You Head Outside To Catch A Glimpse?

Bad news for anyone who was planning on going out and partying tonight, as the meteor shower's visibility will begin after midnight. (You can always take a break from dancing with your besties to head outside and weirdly stare up at the sky with a bunch of strangers — and side note, if anyone meets their future significant other doing this, def hit me up and let me know. I love a good romance guided by the galaxy.)

Space.com meteor experts recommend going outside at 1:30 a.m. (wherever you are), and just chilling a bit for 20 minutes or so to let your eyes get used to being out in the dark. You'll need laser sharp focus and adjusted corneas to be able to catch the great gig in the sky — and yes, you should play Pink Floyd while you're out there.

The Shower Will Be Visible From Oct. 20 THROUGH 22

Even though the Orionid meteor shower will be happening all weekend, Oct. 20 through Oct. 22, according to NASA, it will hit its peak tonight, so you should definitely try to head outside when it peaks instead of putting it off until Saturday or Sunday.

When you head outside, take a minute to reflect on your week and how you've been feeling. Do you want to keep up the same feelings in the week ahead? Or do you want to manifest an entirely different energy into being for your days ahead? Following a new moon, or a moon ritual, is the best time to set your intentions, but cosmic occurrences serve as a great reminder that our problems and our perceptions of the world are not as big as they may seem. Think about how you can release some unnecessary stress (the world continues to spin whether you stress out or not), and channel that energy into doing something good for others and the world around you. You are unique and can provide insight and services to those in need around you.