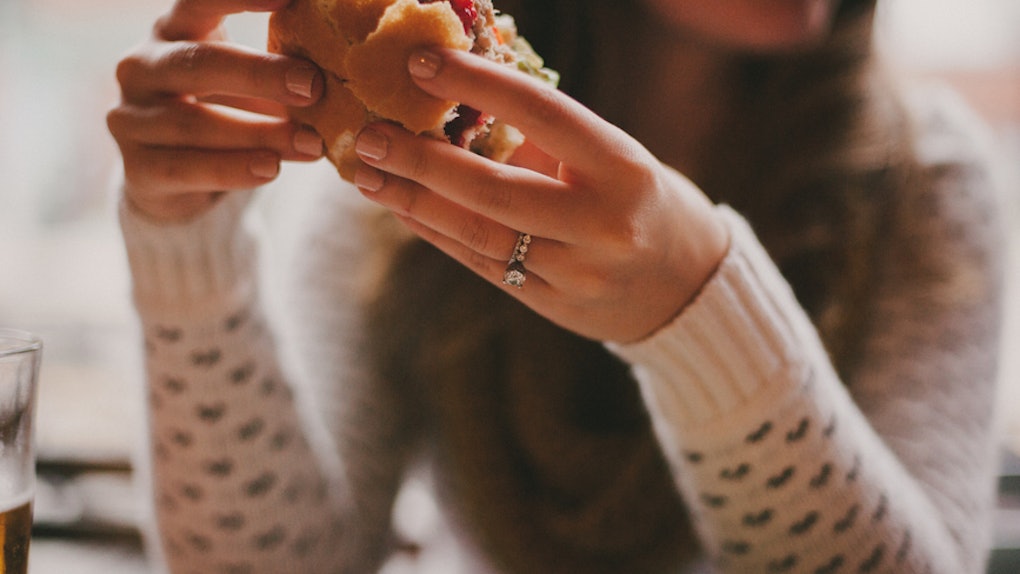 What It's Like To Be Engaged In College, According To One Woman Who Said Yes

I'll be honest. I had no idea that #RingBySpring was a legitimate college tradition until now. Turns out, it's when college sweethearts get engaged before graduation, usually during their last semester, and it's more popular at religious, academic institutions in the South. So I'm not surprised that I didn't get the memo at the fairly large, public university I attended. I am surprised, though, that so many of these women say they faced backlash from friends, family, and even online communities for getting engaged in college. Frankly, it's nobody's business. If you and your partner decide that you're ready to tie the knot before you're ready to move the tassel over to the left, I say, "Go for it!"

Quincy, 22, got engaged a month before her college graduation and, despite my optimistic, don't-care attitude toward the idea, she says it wasn't that easy. "I went to the University of Texas at Austin, so it was more common here than elsewhere but not in my specific friend group. It was something they knew existed but also something they didn’t understand at all. I’m a white, straight Christian — who the stereotype most commonly applies to — so it was difficult to be the stereotype and also try to fight against it," she tells Elite Daily.

Why fight against it? Well, because most young people view getting married in college as something their parents and grandparents did out of tradition or religious obligation. Quincy experienced this firsthand, saying, "In general, people think of those who marry young as either irresponsible, hyper-religious, insecure, or expecting a child. [They assume] there must be a reason other than love or respect and will develop their own ideas of what that reason could be." (Uh, it's a loving relationship between two people, guys — that's plenty reason enough.)

Still, recent surveys conducted by the Pew Research Center suggest that millennials are getting married later in life than any generation that came before them — not because they've given up on love, but because most of them (69 percent) claim they're not financially stable enough to get married. In addition to this, many of them argue that marriage isn't the only path to having a family and consequently, are much more open to cohabitation without marriage. As an example, 46 percent of people under the age of 30 say that the increase in non-traditional family arrangements is a good thing, compared with only 30 percent of those over 30. So it makes sense that, according to another survey conducted by the Pew Research Center, 44 percent of people between the ages of 18 and 29 say marriage is becoming obsolete.

For Quincy, these statistics on modern love present a few problems. While older people questioned her readiness for marriage, some of her peers had trouble relating to her. Her engagement ring quickly made her the target of unsolicited criticisms, opinions, and questions from friends and strangers alike. She became reluctant to discuss any minor relationship problems she and her partner were having for fear that no one would take her seriously. Presumably, the immediate response would be something along the lines of, "See? I told you so," which is inconsiderate and let's not forget, incredibly annoying. She adds that, at times, the experience was also isolating and disorienting because none of her friends seemed to be on the same track as she was. "When my friends were making fun of the ring-by-spring concept, I was actually living it."

"When my friends were making fun of the ring-by-spring concept, I was actually living it."

On some college campuses though, the entire student body is in on the ring-by-spring tradition. It's so ingrained in campus culture that it becomes a major part of their recruitment campaigns and is even included in the course catalogs. Liberty University, a private Christian college, hosts an engaged-couples’ workshop alongside an academic course titled, "Marriage and Family," to prepare committed couples for the next step in their personal lives. Think of it as taking a course in professional development or financial planning. At the end of the day, the goal is to prepare students for the future they've mapped out for themselves and for some, that includes marriage.

Although Quincy's experience was challenging, she doesn't regret her decision. In fact, she actually earned herself special privileges within her friend group since she was the first among them to be engaged. "Because I was the only one of my friends with a ring on my finger, they were more invested in the idea and wanted to support me where they could," she says.

As long as your decision to get married is one you've made sincerely with your partner — without succumbing to social pressure or criticism — there's no reason why you shouldn't be allowed to celebrate like any other engaged couple would. Your true friends will stand by you at your wedding and at graduation.