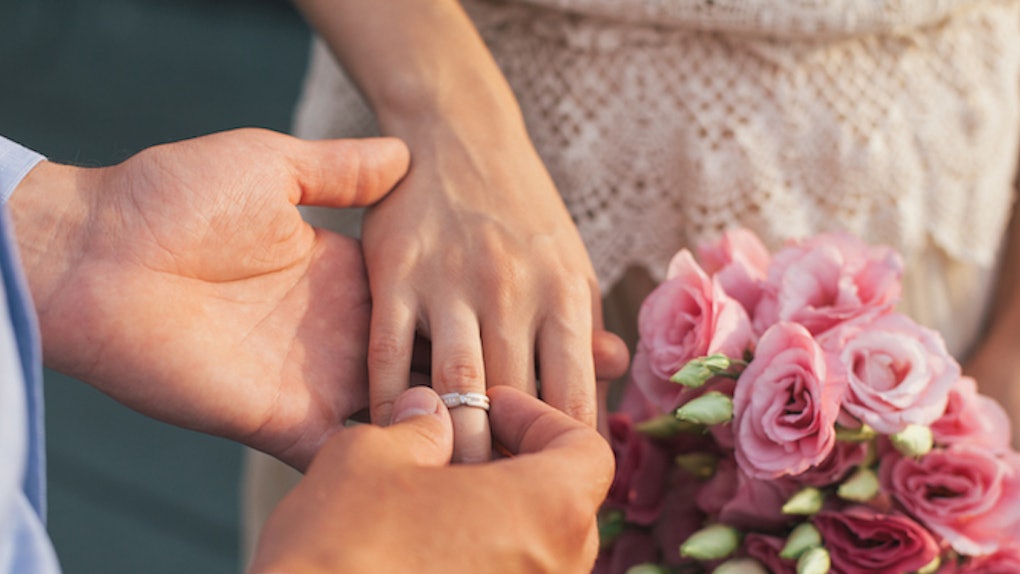 7 Signs You're Not Ready To Get Engaged Right Now

It's that time in our lives where proposals and engagement rings are starting to creep onto our Instagram scrolling and Facebook newsfeeds. All the mazels, hoorays, and cheers to those happy couples, but engagement isn't necessarily the right next step for every duo in love, especially when you're in your late teens or early twenties. There are so many milestones along the way before an engagement – like meeting each other's families, going on a trip together, swapping keys, and maybe even moving in together. If you're not ready to get engaged, there are probably a few warning signs to make you more aware of your true feelings toward your partner – or you - getting down on one knee.

I spoke to Chris Armstrong, relationship coach and owner of Maze of Love and Anita A. Chlipala, LMFT and author of "First Comes Us: The Busy Couple's Guide to Lasting Love." They both offered different perspectives and options of warning signs you may not be ready for engagement quite yet. And if you think you are ready to get engaged, scroll down and read, just in case.

You're not confident in yourself or you might be settling in the relationship.

It's pivotal to recognize if you're doubting your self-worth and settling in a relationship, and possibly, an engagement. If you feel like you're settling, like you and your partner don't share enough interests or they don't excite you enough sexually, you should not be getting engaged to that person at all.

Armstrong tells Elite Daily that sometimes young women can "get married because [you] feel as though this is as good as it gets – only to later find [yourself] and potentially question [your] decision to marry."

You're actively looking for a new job.

"Whether this is bouncing between jobs or trying to find [your] passion, getting engaged during this time is not a good idea and the reason is simple," Armstrong says. "When someone is in this space, it is too easy to let love be the cure but what happens more often than not is that it becomes a distraction instead."

You don't know where you want to live.

Engagements and marriages typically mean settling down with your spouse. Armstrong says if you don't know where you want to live, that may be a sign you're not ready for engagement. If one partner is sure of their future location, and one isn't, or doesn't want to stay in one place, that's something to figure out before committing to the idea of marriage together.

"Don't make a commitment to someone [...] if you are going to be miserable down the line or if it's going to cause friction that could've been avoided," he says.

You don't know if you want a family.

"Not knowing whether or not [you] want a family," Armstrong says is another reason to maybe not get engaged. "This is especially true if [your] potential fiancé is sure from their own mind. Don't get engaged if one side knows what they want in this case and the other doesn't."

You're afraid of divorce.

"I've worked with clients whose parents divorced and they never discussed with them why they got divorced," Anita A. Chlipala tells Elite Daily. "So it remained this unresolved thing that they fear will also happen to them."

If you're afraid of divorce to the point of it remaining a cloud over your head regarding relationships, it may be wise to address this in therapy or talking with your parents fully about their issues, before making that commitment yourself.

A potential obstacle could be getting engaged at a young age – our brains aren't even fully developed until our mid-20s, according to a 1993 study.

Of course, there are couples who get engaged and married on the younger side, but there's a better chance to stay together if you wait out walking down the aisle just a few more years.

The idea of it fills you with dread.

If the idea alone of getting engaged to either your current partner or anyone in general makes you anxious, that is a massive red flag, says Chlipala.

It's important to remember, though, that just because you don't want to get engaged or married doesn't mean you and your partner need to break up. It could be way too early in the relationship for that to be an option, or, if your partner doesn't want to get married either, you both can simply be together, without the wedding bells at all.