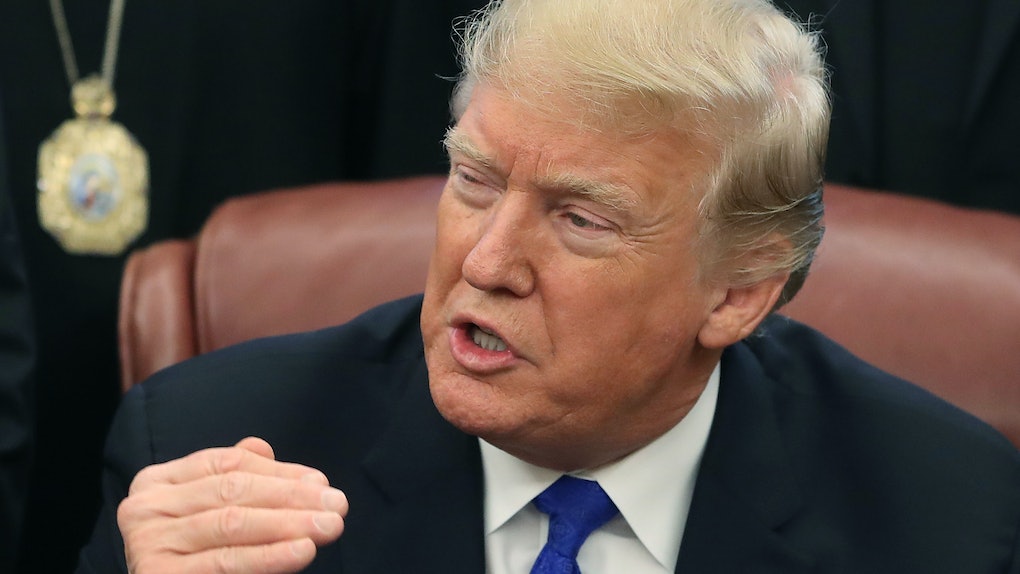 What Is An Unindicted Co-Conspirator? Trump Might Be In Danger After Cohen's Sentencing

The week of Dec. 10 has certainly seen its fair share of drama. From guilty pleas to angry tweets, Michael Cohen's latest sentencing has everyone asking, what is an unindicted co-conspirator? Well, it has to do with President Donald Trump's future, and spoiler alert: it doesn't look pretty.

According to legal website USLegal.com, which is not a government-affiliated site, an unindicted co-conspirator is an individual who has been "identified by a law enforcement officer to have engaged in a conspiracy, but who is not charged in the indictment charging that person’s fellow conspirators" — so basically, someone who prosecutors believe to be involved in a crime, but hasn't been actually charged. Individuals are often named co-conspirators in cases of immunity and evidentiary concerns (meaning that there might not be enough substantial physical evidence to prove guilt). Therefore, those individuals aren't charged along with fellow conspirators. Why is this information relevant you may ask? Well, according to Politico, Michel Cohen's recent sentencing, which included prison time for hush money payments that Trump allegedly directed him to make, might make President Trump an official unindicted co-conspirator. As of Dec. 13, Trump has not been formally accused of or charged with any crime. The White House did not immediately respond to Elite Daily's request for comment.

During the sentencing on Wednesday, Dec. 12, federal judge William H. Pauley told the court that Trump had directed his former law team, including Cohen, to commit a federal felony. No one in the courtroom disagreed with this statement, according to Politico. Even though the Dec. 12 sentencing was about Cohen's bad deeds, this doesn't mean that his former client, President Trump, is safe. Now that Cohen has admitted to Trump allegedly being involved in the federal crimes, this means that the likelihood that Trump will be indicted has increased. However, it's still unclear whether a president currently in office can actually be indicted. Plus, since there are still issues concerning physical evidence, that means that Trump may be seen as an unindicted co-conspirator. Yeah, it's a little bit confusing.

Cohen's statements before and during sentencing might have been what implicated Trump, but there's a chance that Trump Organization employees could be in hot water as well. So far, Trump Organization CEO Allen Weisselberg has already been granted immunity by federal prosecutors, which may indicate that further investigation into the organization, and its employees, are already underway, and additional charges might be filed. So, that means that even if Trump can't or won't be indicted, then there might be a chance his sons Donald Trump Jr. and Eric Trump, who both work for the Trump Organization, might be in the hot seat. Elite Daily reached out to the Trump Organization for comment about the potential investigation, but did not hear back in time for publication.

Of course, nothing can be said for sure about what exactly will happen to President Trump, or his organization. However, there's a good chance that we have't heard the last of Cohen or what he has to say about his former relationship with Trump. Following Cohen's sentencing, the former attorney's spokesperson Lanny Davis shared a statement with Elite Daily explaining Cohen's plans to state "all he knows about Trump." He says,

Michael Cohen, former attorney to Donald Trump, continues to tell the truth about Donald Trump’s misconduct over the years. At the appropriate time, after Mr. Mueller completes his investigation and issues his final report, I look forward to assisting Michael to state publicly all he knows about Mr. Trump – and that includes any appropriate Congressional committee interested in the search for truth and the difference between facts and lies. Mr. Trump’s repeated lies cannot contradict stubborn facts.

Just when we thought 2018 might come to a close without any drama, I guess we assumed wrong. Who's to say what will come from Cohen's juicy sentencing, but one thing is for certain: This saga isn't coming to a close anytime soon.