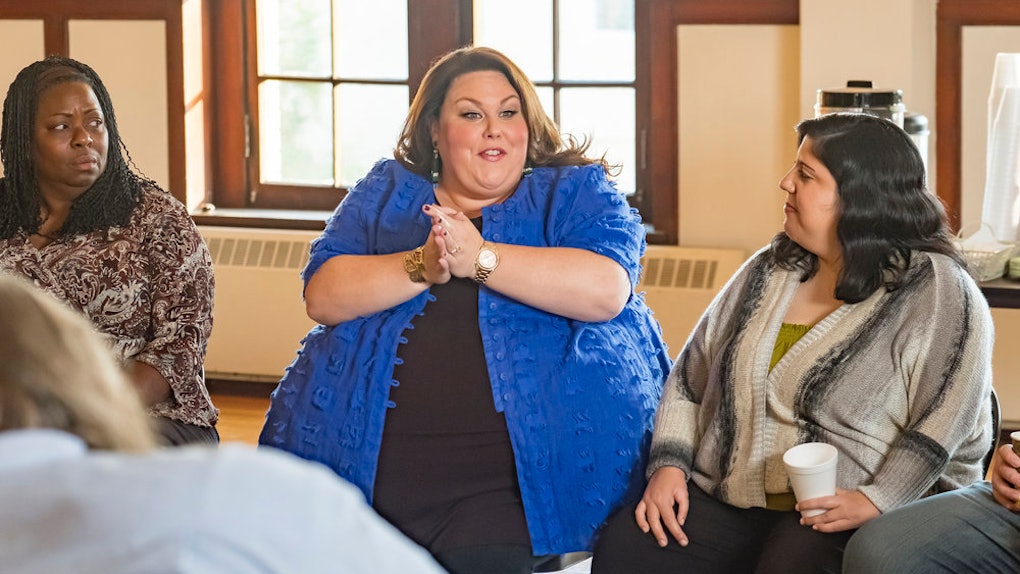 What Is Toby's Happy Song On 'This Is Us'? We Finally Got Some Laughs In

Over on This Is Randall, the foster dad was having a heart-to-heart in the ladies room with Deja. On This Is Kevin, someone was getting (probably) dumped by Sophie while addicted to Vicodin. But on This Is Kate, thing were far more joyful. Toby found out he was going to be a father, and he went about as over the moon as you'd expect. But for some fans, the question of the evening was what is Toby's "Happy Song" on This Is Us?

Toby was ecstatic to learn Kate was pregnant, even if it also meant he'd cleared off his desk for nothing; an eight weeks pregnant lady wasn't about to have sex with him in his office. Kate on the other hand, wasn't about to let him tell anyone. After all, she's only eight weeks along. Miscarriage is a serious possibility, if not other syndrome issues that can arise when one is pregnant over 35. (No, I will not use that awful "geriatric pregnancy" term. She's not giving birth is a nursing home.)

So what's a man like Toby to do when all he want to do is explode to the world and his soon-to-be wife says no?

Well, if he's Toby, he's a good boy and agrees not to tell anyone, even though it's killing him. Because even though he's continually trying to "fix" Kate, he also gets her and her fear about losing the baby. It's just that important to her that she can't tell anyone. Toby will give her this one, even if it's driving him nuts.

But then there's was the little matter of Madison. Kate is driven nuts by this pretty perfect little this creature in their food therapy group, mostly because she judges the girl as not needing it. The stress of being pregnant and not being able to talk about it (along with the real physical stress of one's body building a small human from spare cells and scratch) made Kate snap this week during the session at Madison, belittling her problems. And then she was so stressed out by that fight that the two of them totally backed into each other pulling out of their respective parking spaces.

In the aftermath of that small fender bender, Kate lets it slip she's preggers. And when she tells Toby about it, she admits, yeah, it kind of felt good to admit it to someone. So now she's getting to tell people and he's not?

Kate had to make it up to him. So she took him to a place where they knew absolutely no one and told him to go to town.

Toby... went to town. To the strains of Hootie and the Blowfish, of all things.

*Yes that's the actual original video for the damn song too. I should know, I was in high school when it came out and it was all over VH1. (Yes, VH1 still played videos in the '90s.)

Toby then went around to every single last patron ad told them all his wife was pregnant before not only doing a "Singing In The Rain" type pole dance, but one that ended with a Flashdance type bucket of water over-the-head ending. it was hilarious and glorious, and I'm really glad Kate let him get that out of his system, aren't you?

Now, let Kate and Toby never speak of this again, and never ever return to that place, because they'll probably get kicked out if they do.

The real question is how and when does Kate break this to her brothers? And will Toby and Randall do a happy baby dance when she does?

More like this
12 Unique Maid Of Honor Gifts On Etsy Worthy Of Laughs & Happy Tears
By Marisa Casciano
25 Dirty Jokes To Text Your Partner For Filthy Laughs
By Corinne Sullivan
Is Meredith Actually Recovering On 'Grey's Anatomy'? She Finally Woke Up
By Abby Monteil
Stay up to date