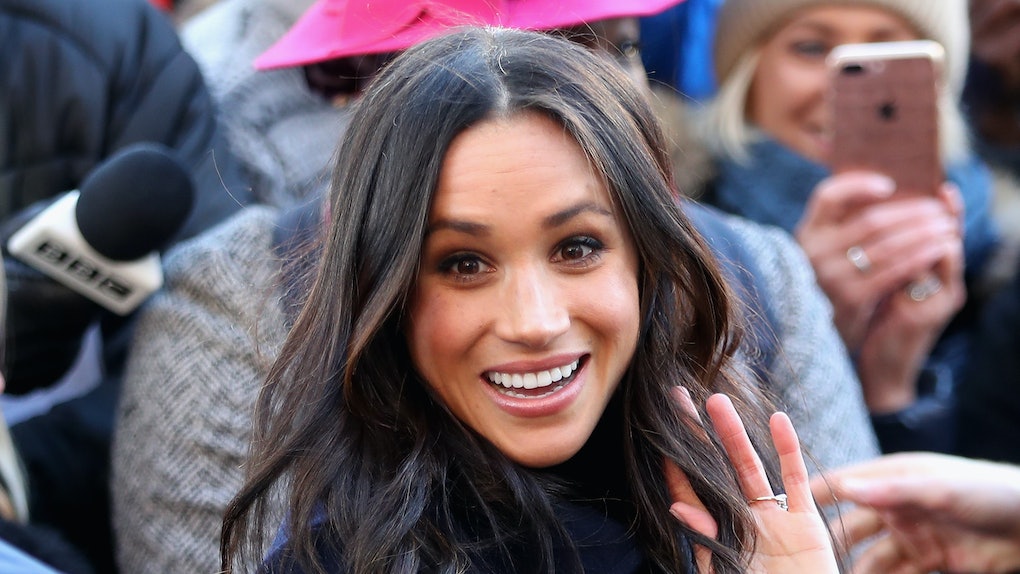 What Is Meghan Markle's New Year's Resolution? The Royal-To-Be Is So Relatable

Have you ever found yourself completely struggling to keep any of your new year's resolutions even just a couple weeks into the new year? I know I have. As it turns out, you're not alone (phew!). In fact, you have some very famous (and soon-to-be royal) company when it comes to the yearly test of sticking to those resolutions that you were so excited about in January. With the spotlight that's been on Meghan Markle since she recently got engaged to Prince Harry, you might wonder how she is approaching this new year. So, what is Meghan Markle's new year's resolution?

Unfortunately, Markle hasn't revealed specific resolutions for 2018, but thanks to her former blog, The Tig (which she shut down in April 2017), you can gain some insight as to how she likes to approach her own new year's resolutions. It won't take much digging, either, because Markle penned a blog post in January 2016 discussing the subject directly. Thankfully, you can still read her thoughts on the subject (even though The Tig is no more), because she has some good advice for would-be resolution makers.

Back in 2016, Markle was getting ready to re-up on her usual new year's resolutions. They included running a marathon, re-learning French, and to stop swearing and biting her nails, according to her 2016 post on The Tig.

Something changed before she solidified her 2016 resolution list, though, and she decided to switch it up and make just one resolution for the year: not to have a resolution.

She explained in her post that while she pondered what the goal of a resolution should be, she realized that saying she "can't achieve" a goal only led to her "wallowing in disappointment." Now, this doesn't mean that Markle gave up on working toward life goals, but it does mean that she didn't want her days of 2016 to be defined as either a "triumph or failure" based on her ability to run long distances or carry on a conversation in French that particular day.

She went on to say, "If I can’t run a marathon, that's okay." She continued to explain how resolutions shouldn't be confined to 365 days when she said, "If it takes me a couple more years to lock down that French tutor and nail the language j’adore oh so much, that’s cool too." Personally, as someone who finds "colorful" language often sneaking into her day-to-day conversation, I very much appreciated Markle's thoughts on the subject when she said, "...if I toss out a four letter word once in a blue moon, well frankly I think it adds character." Hear that, mom? Character.

Markle had more advice beyond simply not making resolutions. She also encouraged people to "approach life playfully" in the new year. She shared that she planned "to laugh and enjoy" the year ahead and she intended, "...to keep my standards high but my level of self-acceptance higher." BRB, I'm going to write this down in my planner and make it my 2018 credo.

Oh, wait, before you go live your best 2018 life by following the Markle method, you need to hear her last bit of advice, via her friend and Suits cast mate, Gina Torres. Torres told Markle, "Make sure you leave room for magic." That sound advice sounded good enough for Markle to include it in her new year's resolution post, along with the advice, "To make my plans, and be okay if they sometimes break. To set my goals, but to be open to change."

These resolutions are seriously so good — thankfully, you can apply them to any year. If Markle is a case-study of how living a resolution-less year will turn out, then I think most people would be willing to jump on board.

Not only has Markle become engaged to Prince Harry, but she's spent most of her life becoming a woman that many would call a role model. She's well-educated and also appears devoted to being an activist and philanthropist. If any of these accomplishments are due, in part, to her recent attitude change toward resolutions, then I think a lot of people will join her in a resolution-free 2018. Just remember to leave room for magic!