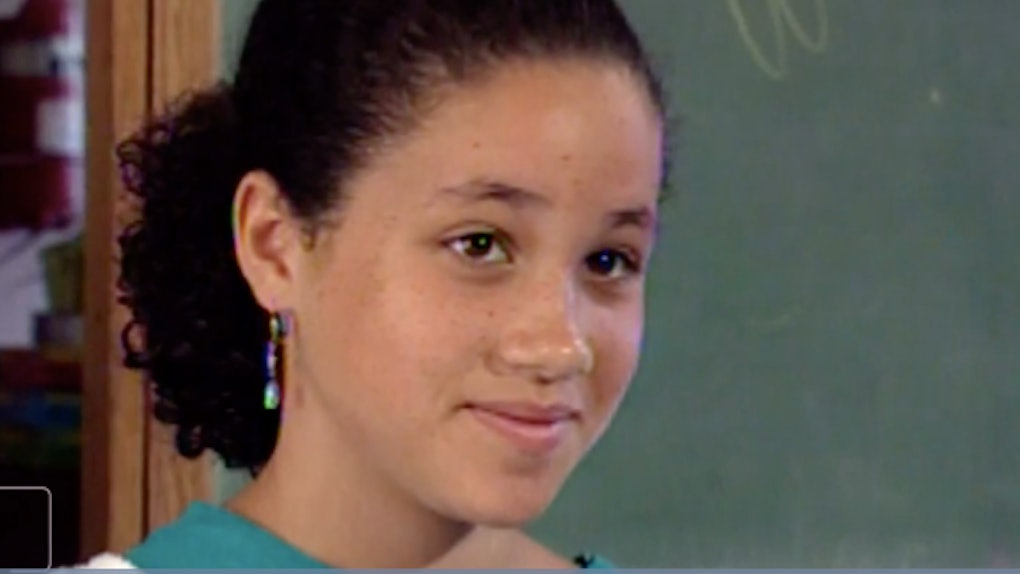 You probably know that Meghan Markle is a future member of the royal family thanks to her recent engagement to Prince Harry, but you'll be happy to learn that Markle is so much more than a bride-to-be. As it turns out, she got her start at making a difference in the world as a young girl in grade school. She saw something she didn't agree with, she put her pen to paper, and then Meghan Markle's letter to Ivory dishwasher soap sparked a change in Ivory's advertised message.

Get ready to feel super inadequate about what you were doing when you were 11 years old, because Markle was busy challenging socially-accepted gender norms and making real change. According to Inside Edition, Markle and her classmates were tasked with a social studies assignment in which they watched different commercials and dissected the messages that each commercial was attempting to convey. Markle went above and beyond with this assignment when she was struck by the message in an Ivory dishwasher soap commercial.

Markle noticed that the Ivory commercial only targeted women with a line that claimed, "Women all over America are fighting greasy pots and pans." That phrasing didn't sit well with young Markle, so she did something about it. She wrote a letter to Procter & Gamble (Ivory soap's manufacturer), civil rights lawyer Gloria Allred, then-first lady Hillary Clinton, and Nick News anchor Linda Ellerbee.

Markle's reaction to the Ivory dishwasher soap commercial was like:

In the letter that Markle penned, she encouraged Ivory to amend the messaging in their commercial to be more inclusive, since she felt that moms shouldn't be tasked with doing all the chores. She suggested that the line be changed to, "People all over America are fighting greasy pots and pans," altering the phrasing from "women" to "people." It sounds like a reasonable suggestion, and I love that Markle had the confidence at such a young age to take a stand.

In a 2015 speech at the UN on International Women's Day, Markle credited her father with giving her the courage to stand up for what she believes in. She said in the speech, "He encouraged me to write letters, so I did — to the most powerful people I could think of."

This is young Markle hard at work impacting change.

As it turns out, Markle was pretty powerful in her own right, because the soap company actually changed the commercial to include Markle's suggestion to use the word "people" instead of only "women." That's right, a national corporation altered their advertising on the advice of 11-year-old Markle. Feeling inadequate yet?

That wasn't the end of Markle's Ivory soap letter, though. Remember how she sent the letter to Linda Ellerbee, the Nick News anchor? Well, Ellerbee was so impressed with Markle's desire to impact change that she sent a television crew to interview Markle for a story.

Markle expanded on her views of gender equality (or lack thereof) in terms of advertisement messaging on an episode of Nick News in 1993. On the show, Markle said, "I don’t think it is right for kids to grow up thinking that mom does everything," which is probably what inspired her to urge Ivory to amend their message. Markle also encouraged her peers to stand up for what they think is wrong or offensive when she said:

If you see something that you don’t like or offended by on television or any other place, write letters and send them to the right people and you can really make a difference, not just for yourself but for lots of other people.

Her word choice was very telling about her passion to help others, especially at the end of her statement when she highlighted the importance of making a difference on behalf of other people. To see 11-year-old Markle foster her compassion for others and her desire to create change is really quite inspiring.

As Markle prepares to marry into one of the most famous families in the world, it's good to see that she comes from a strong foundation of her own. She proved at a young age that she knows what is right and wrong, and she's willing to fight to fix what needs fixing. She'll no doubt be an asset to the royal family as they go about their mission of doing good in the UK and throughout the world, and they might even learn a thing or two from Markle.