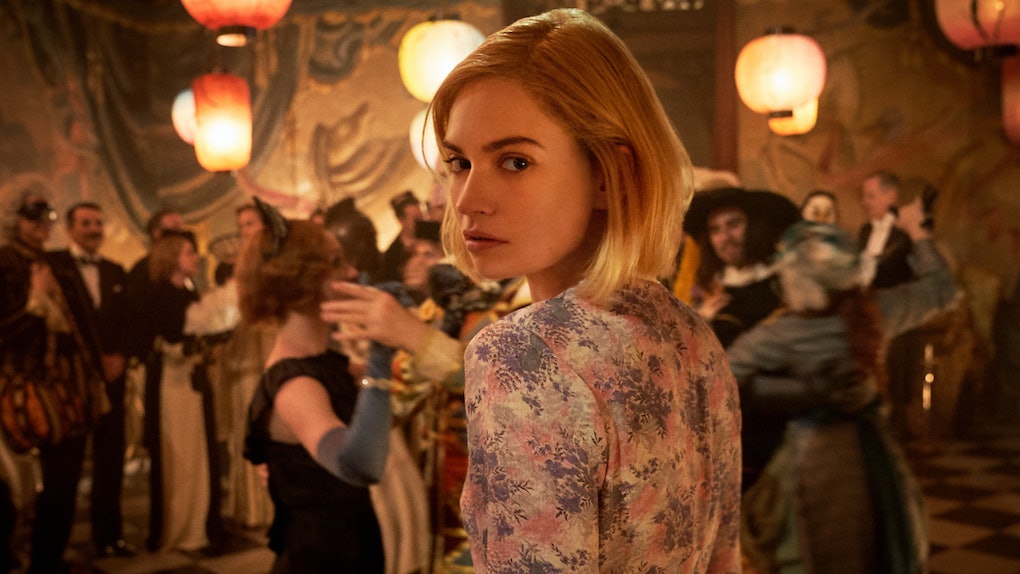 What Is Lily James’ Character’s Name In ‘Rebecca’? Mrs. De Winter Is A Mystery

"Last night I dreamt I went to Manderley again" is one of the most famous opening lines in fiction. It begins Daphne du Maurier's novel Rebecca, which became one of Alfred Hitchcock's most famous films. But in the new Netflix version, the story comes full circle, ending with the same line. And yet, even though this new version of Rebecca has added a tidy ending to the adaptation, one mystery remains as the film ends: What is Lily James' character's name in Rebecca? Fans are perplexed that it never seems to come up. But that's deliberate.

Warning: Spoilers for Netflix's Rebecca, plus a few from the book, follow. When Rebecca opens, Lily James' character is working a job with the insufferable Mrs. Van Hopper as a lady's companion. She meets the wealthy widower Maxim de Winter, the most eligible bachelor in England, while traveling with her boss. The two fall head over heels in love, even as Van Hopper's gossip suggests the death of Maxim's first wife is not all it seems.

By the end of the trip, Maxim has asked the protagonist to marry him. From that point on, she becomes Mrs. de Winter — or, more specifically, the second Mrs. de Winter.

And yet, somehow between the meet-cute at the hotel, the love affair, the marriage, and the couple's arrival at the de Winter estate of Manderley, no one ever says her name. Once settled in England, no one else says it either. She is merely referred to as "Mrs. de Winter."

Fans who have never read the book (or seen the Hitchcock film) will almost certainly find this perplexing. Did they somehow miss her name being said? But no — in fact, this is partly what makes Rebecca famous is the lead character's lack of a name. Author Daphne du Maurier was far from the first to use this conceit, mind you, but it is particularly effective in making the narrator self-effacing, allowing readers (or in this case, viewers) to fully immerse themselves, with not even so much as a name to separate the character from themselves.

It also speaks to how much the second Mrs. de Winter sees herself as lesser to those around her. After all, she is a servant when viewers meet her, suddenly thrust upward into the landed gentry. She is an insecure young woman who is, in effect, living a Cinderella story. But, as those around her constantly remind her, it's a fairytale no one considers her worthy of living.

But the film also changes the ending. Instead of a more ambiguous finale, the finale scene gives the second Mrs. de Winter a "win," as it were. One might have thought, since this version allows the second Mrs. de Winter to come out on top against Rebecca's memory, it would buck tradition entirely and add a name for James' character. But it seems that some traditions are still maintained.

Rebecca is on Netflix now.