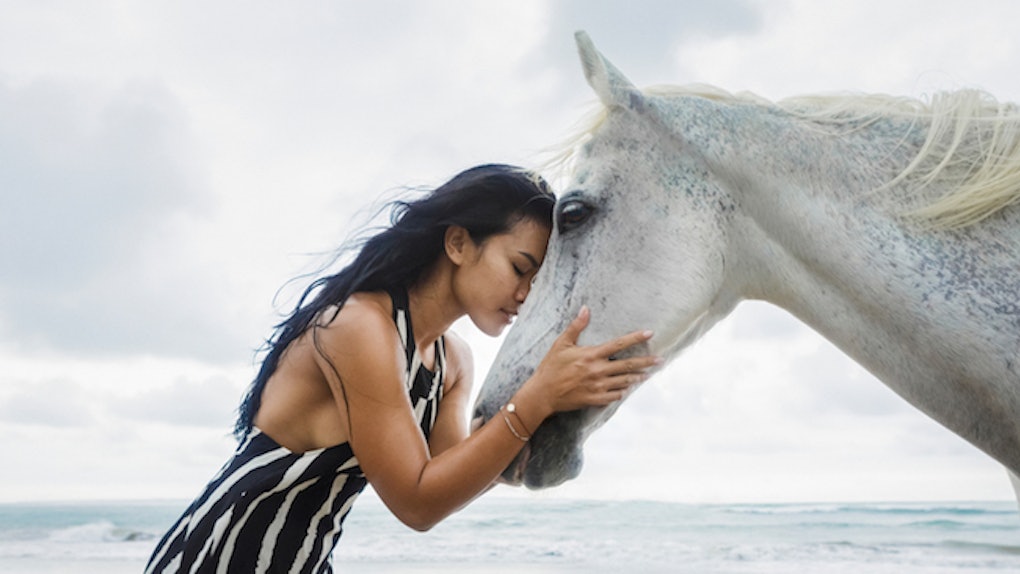 What Is Horse Yoga? It’s Exactly What It Sounds Like & People Just Aren't Having It

As a yoga instructor, I was initially confused AF when the traditional practice of yoga began taking new...furry forms. Animals are increasingly being signed up for vinyasa classes alongside zen-seeking humans, and it's kind of controversial, to say the least. Goat yoga (goga) turned into doga (yep, you guessed it, yoga with puppers), and then I stumbled upon an article on equestrian yoga. But like, what is horse yoga? I can wrap my head around the smaller animals, but this one seemed like it was going a little too far — you feel me?

Horse yoga is the latest trend in the wellness space, and the hybrid is both intriguing and extra AF all at once. According to Yoga Journal, equestrian yoga is meant to improve the bond and connection between two living beings — aka a human and a horse, in this case. The practice was originally created to improve core stability, balance, and help yogis stay present, all while creating a unique union with a majestic animal and the nature that surrounds you both.

While the combination of humans, asanas, and animals sounds cool in theory, striking a pose atop a horse honestly seems like anything but natural.

You might think I'm being slightly judgmental when it comes to combining horses and yoga — or maybe you think I'm not getting heated enough. Either way, the comment thread underneath the Yoga Journal Facebook post probably voices everything you're thinking and more.

I'll stick with the kind of yoga I do. This flash-in-the-pan styles are getting ridiculous. I bet the horse is grateful it's not nude horse yoga.

I don't know, man. Naked horse yoga doesn't even seem that far-fetched anymore. TBH, anything is fair game at this point.

Yet another fed-up individual expressed themselves in the comment thread:

Disgusting humans!! This is not yoga! Animal cruelty and exploitation should be illegal!!

And finally, one woman posted a thought that we all likely have about social media far too often:

And that’s my cue to get off the internet for today...thanks.

Elite Daily reached out to yoga instructor and New York Times bestselling author Sara DiVello to get her take on postures in the pasture, and she basically summed it all up, without sugarcoating a thing:

Having experienced the healing power of yoga in my own life — specifically with helping me with anxiety and insomnia — I know how much yoga can help people and I want to see it spread in whatever ways it can [be].

So if someone is intrigued by the horse angle, and that gets them practicing, amazing!

However, DiVello reveals that she actually grew up riding horses, and competed pretty seriously, so she knows firsthand that horses (while beautiful, gentle creatures) are also animals that have their own emotions, agendas, and fears:

They can get spooked. They can get bored. They can do any number of things that distract you from the goal of yoga, and that is to bring you deep within yourself to a place of stillness and inner connection.

For DiVello, horses and yoga are two separate practices. She urges people to saddle up and head out on the trail, where you can have a meditative experience connecting with your horse and the beauty of nature around you.

She also urges everyone to get on their mat and give yoga a try on its own for its incredible healing properties:

Just because two things are separately amazing doesn't mean they should be lumped together.

I love spaghetti and [and I love] ice cream sandwiches. But I don't mush them together in one bowl.

More like this
Can I Exercise After A Flu Shot? Experts Recommend Listening To Your Body Post Vaccine
By Georgina Berbari
TikTok's "Make People Think It's A Photo" Challenge Will Make You Do A Double Take
By Rachel Chapman
The Funniest Album Cover Challenge TikToks Are Full Of Hair Flip Fails
By Marisa Casciano
Stay up to date