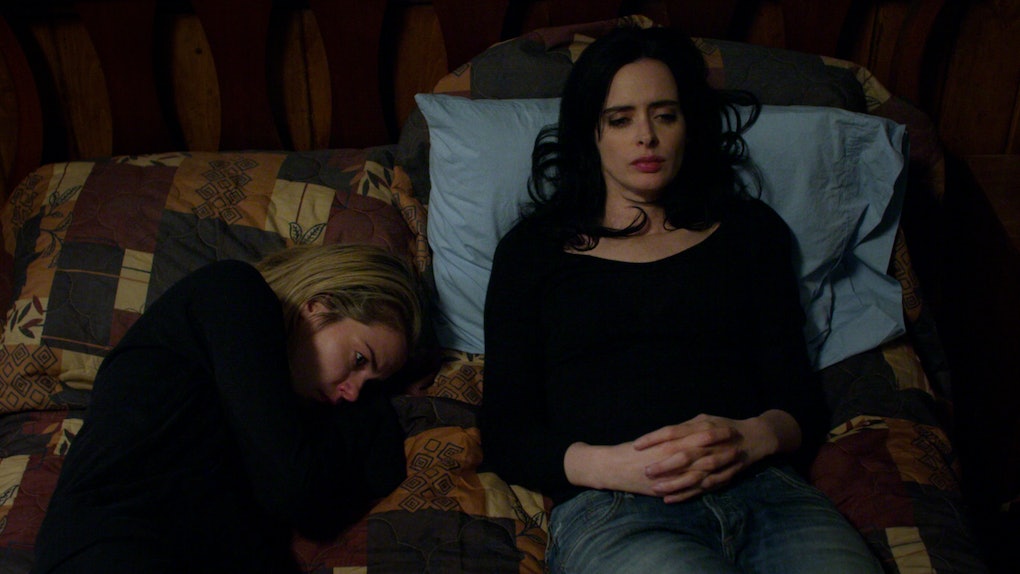 What Is Hellcat's Fate? Here's Everything 'Jessica Jones' Fans Should Know

Jessica Jones has always been different from the rest of the Netflix Marvel-verse. Unlike Daredevil, whose antagonists are gangsters like Wilson Fisk, or Iron Fist, where it's a group like The Hand, or even Luke Cage, where politicians are the bad guys, Jessica always finds herself at odds with the ones she cares for. Over the years, each time the villain has been someone she let get close to her, from the ex-lover to the estranged mother. In this final season, it's her adopted sister, Trish, who becomes Hellcat. What is Hellcat's Fate on Jessica Jones Season 3? It's not pretty.

Despite the final season Jessica Jones introducing an antagonist figure who is unrelated to Jessica in any way with the arrival of Gregory Sallinger, he is less a nemesis than a catalyst. He forces the sisters to work together, taking Trish's nascent superhero deeds from handling small-time crooks to gracing the front pages of the New York Bulletin.

Jessica's recognition of Trish as her equal also goes a long way in pushing the former star of It's Patsy! to take on bigger fish, and develops her own philosophy of crime fighting. There's just one small problem. Trish's view of the world in black and white leads her to see her job not as saving people but balancing the scales of justice.

The job of being a vigilante is a tightrope balancing act. It's a "one person's terrorist is another man's freedom fighter" job. Vigilantes, by definition, work outside of the law. Even if what they are doing is morally right, many times it's legally wrong.

This is the issue dealt with in Captain America: Civil War. Tony Stark wants the group to work inside of the law, even if it means giving up the freedom to do what's morally right in some circumstances. Steve Rogers wants to have the freedom to always do what's right, even if it doesn't fit within the parameters of the law as written.

But Stark, Rogers, and Jessica Jones agree on one thing. One cannot just go off and decide they have the right to determine who lives and who dies. That's not how any of this works. One cannot "balance the scales" that way.

That's where Trish goes off the rails. Despite her claims that she can handle the anger at justice not being served the way she wishes it were, Trish cannot control herself. From the moment she murders Sallinger in an elevator for killing her mother, she has crossed the invisible line between being a hero and being a villain.

Jessica doesn't want to take Trish down, but by the final episode, her sister has left a trail of bodies, and no choice in the matter. Jessica does what she has to do, taking Trish out.

But she does not hurt Trish. Instead, she allows the law to deal with Trish's punishment. When she can, Jessica always works within the system. Trish winds up getting sent to The Raft, the "powered people prison" last seen in Civil War.

It's the most effective medicine she could have doled out, as Trish hears the charges read aloud, and realizes the truth: "I'm the bad guy."

More like this
What's Coming To Netflix In May 2021? Lots Of Action & Drama
By Ani Bundel
'Stranger Things' Season 4: Cast, Premiere Date, Trailer, & More Info
By Ani Bundel
These Movies & TV Shows Starring 'Shadow And Bone' Actors Are Far From Ravka
By Ani Bundel
Stay up to date