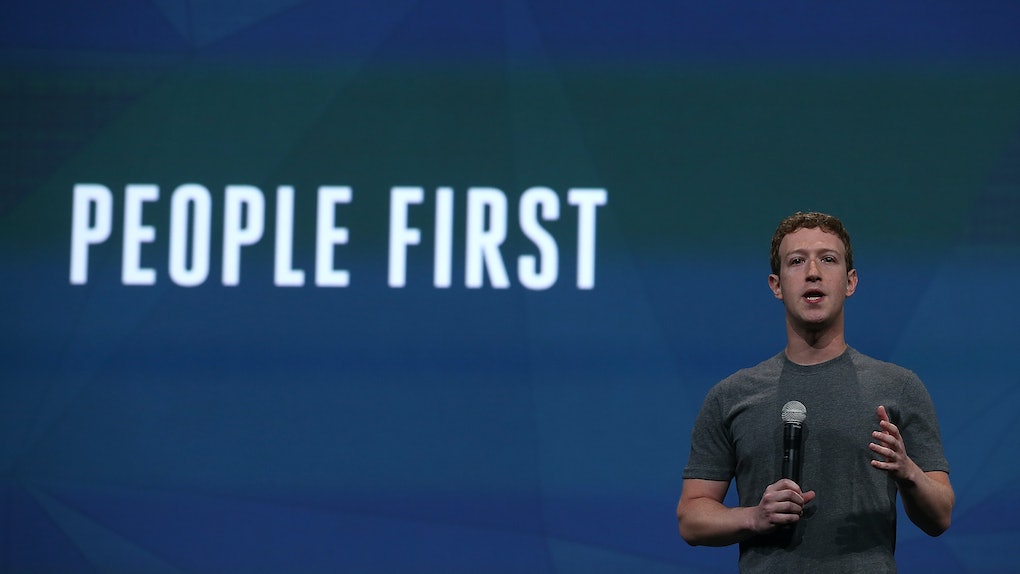 What Is Facebook's Secret Crush? Here's What You Need To Know

Our old friend Facebook is back in the news, and this time, it's not because of data breaches. Well, it probably still is, but it's in the news for other reasons too. After several years of tumult, Mark Zuckerberg has gifted his loyal users the greatest gift of all: love. Well, the chance to tell nine people you know that you like them but are too embarrassed to admit it IRL using Facebook's Secret Crush. What is Facebook's Secret Crush? It's Facebook's newest feature, announced at the F8 (that's 'F' for 'Facebook', obviously — what other words begin with an 'F'?) summit in Silicon Valley. Here's everything you need to know.

To use Facebook Secret Crush, you select up to nine people you're Facebook friends with and have a crush on. Then, according to Mercury News, if any of them list you as their crush, you'll get a Facebook notification (everybody's absolute favorite). If you don't both like each other, then they'll never know you listed them — it's a lot like many dating apps, except it's Facebook, so they already know everything about you. You have to be signed up for Facebook Dating to use it, according to techcrunch.com. Facebook Dating is currently available in five countries but will soon be available in 19, so there should be a lot of crushes going around.

I foresee a few key issues with Facebook Secret Crush, not least of which is the name (once you get a notification, it's no longer a secret). Elite Daily reached out to Facebook for comment at the time, but did not hear back at time of publication. In all seriousness, one big problem is that people might list you as a secret crush just to find out if you like them, not because they like you. While this isn't nice, there's not much Facebook can do to stop people from being mean (or, if there were, I'd like to think they would have stepped in and done something about the insane cyberbullying problem). Additionally, people might just add and remove crushes until they find a match — but Facebook has a solution for that! To avoid this happening, users can only add and remove one crush/day, according to Vox. That's actually perfectly fine with me because I rarely develop more than one new crush each day (although I can't say it's never happened). However, I do worry that people can misuse Facebook crush to learn who has a crush on them, so be aware that someone you list might be misusing the service.

An additional limiting factor about Facebook crush may be that it's on Facebook, which means your crush has to still be checking their Facebook regularly. Following Facebook's innumerable privacy scandals, more and more young people are leaving Facebook or at the very least not checking it (deleting Facebook is nearly impossible — I've tried), so that could be tough. Finally, you have to be Facebook friends with them, which means I can't list Jesse Eisenberg as my crush, which truly defeats the purpose, since he is all of my top nine crushes. Facebook Dating allows you to match with friends of friends or people in your network, but Facebook Crush will be limited to just friends. So, if you're looking to crush on someone who's not on Facebook, you may took to a different service.

There are benefits to Facebook Secret Crush. It's only for people on Facebook Dating, so you'll only match with someone who is interested in using Facebook to date. Furthermore, because you get to pick nine people, you can scroll through your Facebook friends and wonder if there's maybe someone from your past you'd forgotten about. Furthermore, Facebook Secret Crush won't be available in the US until the end of 2019, according to The Guardian, so you'll have tons of time to decide on who your crushes are. Honestly, a crush is a crush, and if your crush is crushin' on you, who cares how you found them?

Facebook Secret Crush might be worth trying out, or maybe you could just go on Tinder and swipe through 7,000 profiles until you get to the one you're looking for. That's what I've always done, and while I can't say it's ever "worked" for me, I also can't say Facebook Crush has. But if you do find that your longtime secret crush likes you back via Facebook, then I am genuinely happy for you! Go forth and celebrate, and don't forget to update your Facebook relationship status when the time comes!