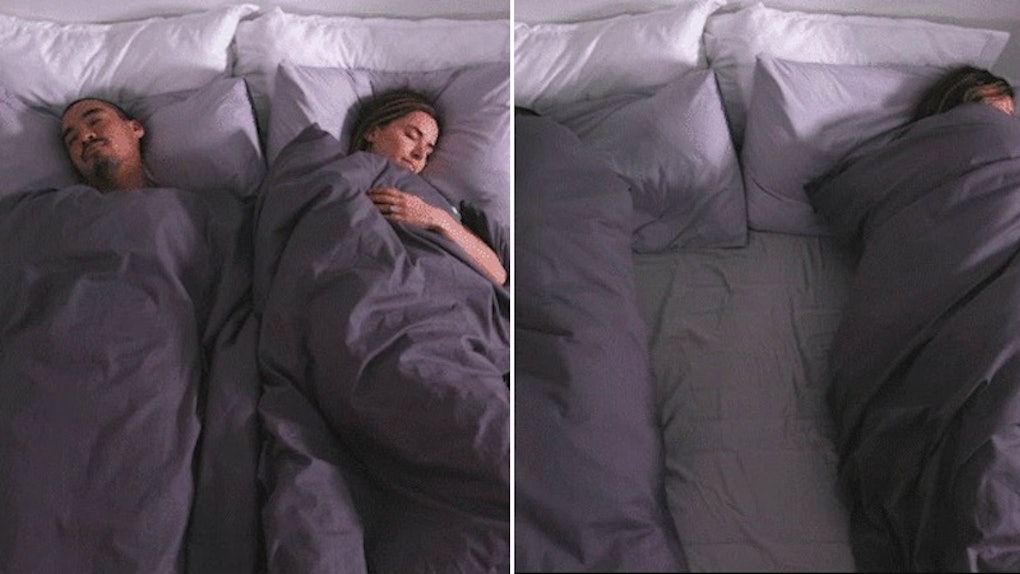 What Is Ervet? The Two Duvet Bedding System Will Keep You & Your SO From Fighting Over Blankets

Ah, a tale as old as time: It's a dark and chilly night. Two people are snuggled up in a cozy bed, fast asleep. All of a sudden, it happens: One person slowly turns over, pulling every last blanket, sheet, and comforter with them. The other person, shivering, wakes with a start. OK, excuse the dramatics, but anyone who's ever shared a bed with someone else knows that hogging the covers is a big issue. If you and your partner have a habit of fighting over blankets in bed, the ervét Kickstarter will help you and your SO sleep so that you can turn bedtime back into something soothing.

Founders Mel and Reid Covington definitely knew what they were doing when they came up with the design for the ervét duvet because, as of writing this article, it's already doubled its funding goal on Kickstarter. So how does this masterpiece work, exactly?

Essentially, according to its Kickstarter page, the ervét is made up of two individual duvets, which are connected down the middle with magnet inseams. This allows you to make the bed with one conjoined duvet, and then adjust throughout the night as you and your partner toss and turn. Genius, right?

Another common sleep problem couples can experience is having very different temperature preferences from one another. But if, at night, you run hot and your partner runs cold (or vice versa), the ervét folks have thought of that, too. Since the product is a duvet, rather than just a regular comforter or blanket, you can mix and match inserts to find a weight and warmth that works for each of you. That means no more sly messing with the thermostat or the radiator to get your bedroom just right. Instead, you can get your comforter just right, and both of you will be happy.

Granted, you might be cringing a little at the thought of a duvet because, if you're anything like me, wrestling a freshly-washed duvet cover onto its insert takes about two hours and a great deal of blood, sweat, and tears. But this one won't send you and your SO pulling your hair out (or heading to an early breakup). Hidden handholds in the duvet's corners and ties to keep the inserts in place will really help streamline the process. Plus, you won't have to complete the tedious task of fastening a long row of buttons once you've got the inserts in, because the ervét closes with a simple zipper.

OK, so here's the bad news: Since this is a Kickstarter, the duvet hasn't hit the market yet. Luckily, though, you don't have too long to wait, because the founders estimate on their Kickstarter page that the innovative duvet will be available in May 2019. Be sure to visit the Kickstarter page yourself to take a look at the different pledge options, each of which will give you a different number of products. For example, pledging $99 will reserve two duvet covers, a fitted sheet, two pillowcases, and even tote bags to keep everything tidy and organized.

Spots to get the first round of shipments are limited, so if you think this is pretty much a dream come true, hop on it, friend. Considering how important quality sleep is to your physical and mental health, it's totally an investment worth making.