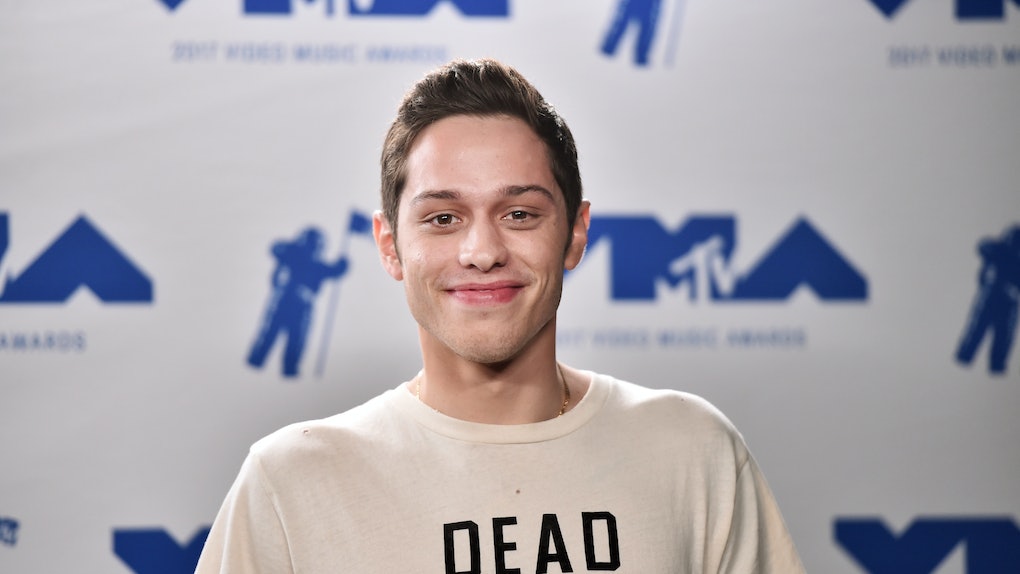 What Is "Big D*ck Energy"? Pete Davidson Has The Internet Obsessed

Think about Ariana Grande and Pete Davidson for a moment. On paper, they make no sense. Grande is a world-famous superstar. Davidson is a celebrity in his own right — he's been on SNL for four years — but he's not quite on her same level. So what is it about Pete that catapults him into Ariana's A-list league? Well, people on Twitter are hypothesizing that it's his undeniable big d*ck energy.

What is big d*ck energy, you ask? Well, a recent piece by The Cut's Allison P. Davis summed it up pretty much perfectly:

BDE is a quiet confidence and ease with oneself that comes from knowing you have an enormous penis and you know what to do with it. It’s not cockiness, it’s not a power trip — it’s the opposite: a healthy, satisfied, low-key way you feel yourself. Some may call this “oh he/she f*cks” vibe, but that is different: you can f*ck, but not have BDE. Some may call this “well-adjusted,” but we know the truth.

Examples of people with BDE include but are not limited to Pete Davidson, Cate Blanchett (yeah, you don't need a D to have BDE), Rihanna (again, NO D NECESSARY), Justin Theroux, and Idris Elba.

How do you know if you or someone know has BDE? Davis explains:

Basically BDE is that swag that could make any Average Joe (or Pete) next-level hot.

Yes, you see it with celebrities like Davidson, but, odds are, you've also encountered BDE IRL. For example, remember that guy in high school who sat behind you in calculus and somehow managed to convince you to be hopelessly in love with him even though he wasn't necessarily the hottest guy ever? I'll tell you why that happened: it wasn't because he was smart or funny or popular or particularly great at flirting (although he could've been all of those things). The reason you were so into him was the fact that he had that undeniable, almost magnetic BDE.

And the internet just cannot get enough of it. People all over Twitter are tuning in to post their own musings on BDE. Read along and inform yourself.

This woman classified BDE based on your horoscope.

As a Cancer, I'm loving this lineup.

There's only one character in all of Harry Potter with BDE.

The fashion world is seriously lacking in BDE.

There's one person who has even more BDE than Rihanna.

REMEMBER, PEOPLE: You don't necessarily need a big d*ck to have BDE.

Which Hollywood Chris has the most BDE? Chris Evans, obvi.

People are nervous about Trump getting involved.

Move over Marylin Monroe, Katharine Hepburn def had the most old Hollywood BDE.

An unexpected spike in BDE is a welcome side effect to menstruation.

Ever wonder which of your favorite characters from "The Office" had BDE? Well, wonder no more.

OK... I agree with everything here except JIM?! C'mon people, he definitely has BDE.

What about your favorite "Big Little Lies" actresses??

Some argue that being "kind of ugly" could help your case of having BDE.

"Parenthood" fans, get ready! They made a BDE ranking for you, too.

...but what about big DIP energy?

I would have to interject on this one to quickly say I believe French onion dip has a sort of quiet, sophisticated BDE.

Obviously, this list would not be complete without a Kardashian-themed roundup.

And now I've been inspired to chime in with my own Kardashian-themed BDE lineup. This time we'll be ranking the ladies.

Khloé: Tries a little too hard to have BDE, but she's got it.

North: The most BDE of anyone in that family.

If you're worried about BDE losing its steam, don't worry! There's a new kind of energy on the rise and it's V girl power.

OK, now go forth and take note of any BDE or CPE that crosses your path. I promise your life will never be the same again.