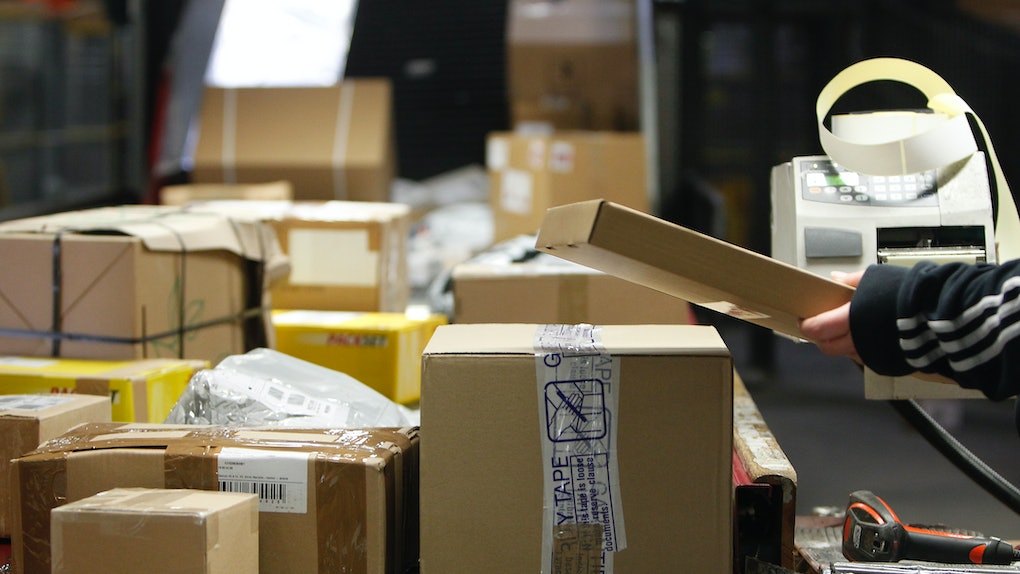 What Happens To The Mail In A Government Shutdown? Here's What It Could Mean For Holiday Packages

Tensions on Capitol Hill and beyond are running high as a deadline to fund the government is fast approaching on Dec. 21. For those relying heavily on online shopping and sending out holiday presents through the mail this year, all this talk of a possible government shutdown this week might understandably have you panicking. So what happens to the mail in a government shutdown? Well, take a deep breath, because it's not as dire as you may be afraid of.

Thankfully, even during a shutdown (or a partial shutdown as the case would be), the mail is still in full service, so don't worry, your packages shouldn't be affected by the change. "Postal Service operations will not be interrupted in the event of a government shutdown, and all post offices will remain open for business as usual," says Kim Frum, a USPS Senior Public Relations Representative, in an email to Elite Daily. "Because we are an independent entity that is funded through the sale of our products and services, and not by tax dollars, our services will not be impacted by a government shutdown." So there you have it.

As for a shutdown, it's worth noting that outcome is far from certain at this point, and would only be a partial one at that; lawmakers earlier this month already passed five spending bills to ensure that specific services would still remain in operation, avoiding the situation that happened earlier this year when Congress was also unable to reach an agreement by the deadline.

At the heart of the spending bill discord was a $5 billion line item that President Donald Trump was seeking in order to fund a wall at the U.S.-Mexico border, a demand which Democrats made clear in a Dec. 11 Oval Office meeting with the president they had no plans to concede on. Trump at the time said he would be "proud to shut down the government" in order to get his funding, but in a reversal on Tuesday, Dec. 18, the administration had backed down from that demand, saying that the administration could find the money for the wall elsewhere.

Generally speaking, what does get affected by a government shutdown are any non-essential, taxpayer-supported services, such as national parks and museums. Essential services like food stamps and air traffic control continue to operate as usual, though some services (as with passport issuances last year) can be impacted or slowed down.

But even if a government shutdown wouldn't affect the USPS, it doesn't necessarily mean you should wait until the last minute to get your gifts out. Either way, it's still the busiest week of the year for the USPS, according to a press release.

"The agency expects to process and deliver nearly 3 billion pieces of mail" this week alone, the release says, adding, "In the two weeks leading up to Christmas, Dec. 10-23, the Postal Service expects to deliver nearly 200 million packages each week." Overall, USPS estimates it will have delivered close to 15 billion pieces of mail and 900 million packages between Thanksgiving and New Year's Day. That's a lot of mail.

(In case you still need to send your items through the post, the agency lists its recommended ship-by deadlines here as well.)

Additionally, Priority Mail delivery will still be happening for certain locations around the country on the big day, normal mail service is generally suspended for Christmas.

Of course, if you've ordered through Amazon or a retailer that delivers through UPS or FedEx, you shouldn't have any problems on that front, either, as they're all private services as well. So even if the government doesn't come to a decision by Friday at midnight, you should still get your Christmas shipping list checked off just fine.

More like this
What Is Boo Bash At Disney World? The Halloween Event Has Rides, Music, & Themed Treats
By Cianna Garrison
These Tweets About The Bidens' Photo With The Carters Ask A LOT Of Questions
By Rhyma Castillo
Biden's American Families Plan Includes Some Free College, Which, Wow
By Rhyma Castillo
Stay up to date