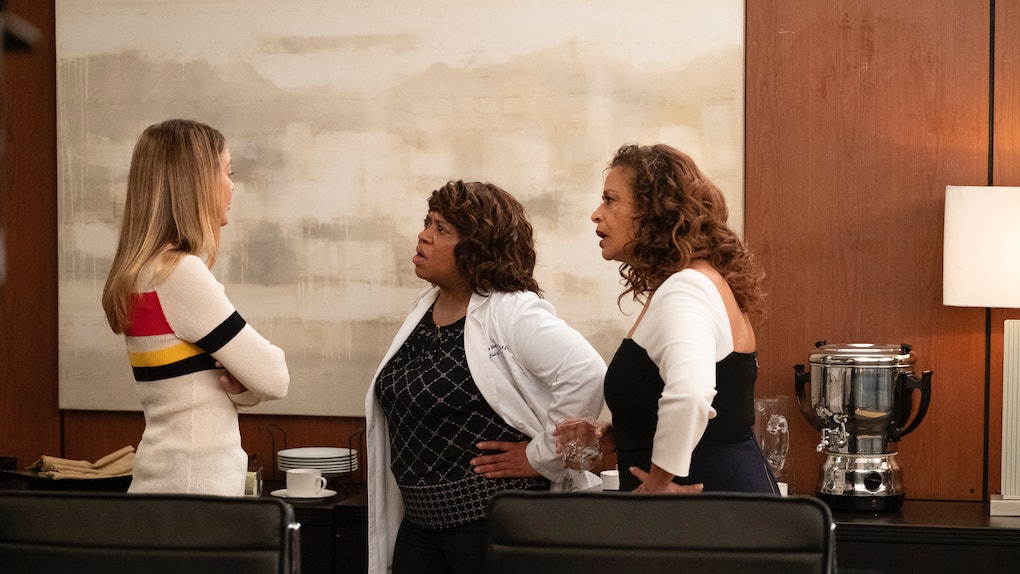 What Happened To Meredith In 'Grey's Anatomy' Season 15? Here's Your Refresher

Grey's Anatomy will return for a historic Season 16 at the end of September. It's not only the longest-running drama on television today, but, unlike the newcomers that surround it on the TV landscape, it's also the longest show per year, with 12 seasons that ran 24 episodes or more. With so many installments (Season 15 ran 25 episodes) it can be hard to keep track of all the drama. So what happened to Meredith in Grey's Anatomy Season 15? It's complicated.

Season 15 was dubbed "The Season of Love" before its debut, and the show did not disappoint. There were love matches, love triangles, love quadrangles, and breakups and makeups galore. In the wake of Season 14's double wedding finale, everyone was doubling down on trying to find relationships. Meredith Grey might have insisted her life was perfectly fine without one, but before long, she too was swept up in all the romance.

By putting herself out there, Meredith had more than a few adventures with new men, which for viewers translated to a few fun cameos. There was the blind lunch date where she ended up meeting someone else's date entirely. There was the matchmaker who didn't make many matches for her. And then there was the DeLuca and Link situation.

Dr. Atticus “Link” Lincoln was the new ortho hire with the carefree attitude. Though a total looker under his scrubs, he didn't seem to have much to him other than looks. A few conversations in with Meredith and she was convinced the blonde hunk was not much more than surface level. But Dr. Grey realized she might have misjudged her colleague, and that there was more to him than she thought.

And then there was DeLuca. From the moment the two of them got trapped together in the elevator during a power outage, sparks were flying. DeLuca had already kissed her once, though drunkenly, at the wedding. But Meredith was convinced it was a bad idea. After all, Deluca is her direct report. Dr. Grey may be OK with breaking some boundaries, but this was not one of them.

At least, not at first. But by the second half of the season, she and DeLuca finally began officially dating, with sleepovers and everything. It also meant DeLuca was privy to one of Meredith's more foolish choices ⁠— to commit insurance fraud on behalf of a patient, by filling in her daughter's information. It might have been the morally right thing to do, but don't tell the courts that. As the story got out, DeLuca threw himself in front of the oncoming train to try to cover for her.

It got him dragged off to jail, but it didn't save Dr. Grey. Meredith was fired by Bailey, who canned Richard and Alex for good measure for the cover-up.

Will Richard, Meredith, and Alex get their jobs back? Will DeLuca do the time for Meredith's crime? How will their relationship survive this crisis? Grey's Anatomy Season 16's two-hour premiere will hopefully answer some of those questions when it arrives on Thursday, Sept. 26, 2019, at 8 p.m. on ABC.

More like this
Will Sandra Oh Return To 'Grey's Anatomy'? Here's What She Said
By Dylan Kickham
'Grey's Anatomy' Is Officially Renewed For Season 18 & Ellen Pompeo Will Return
By Ani Bundel
3 Theories About Jackson Avery's 'Grey's Anatomy' Ending That'll Wreck You
By Abby Monteil
Stay up to date