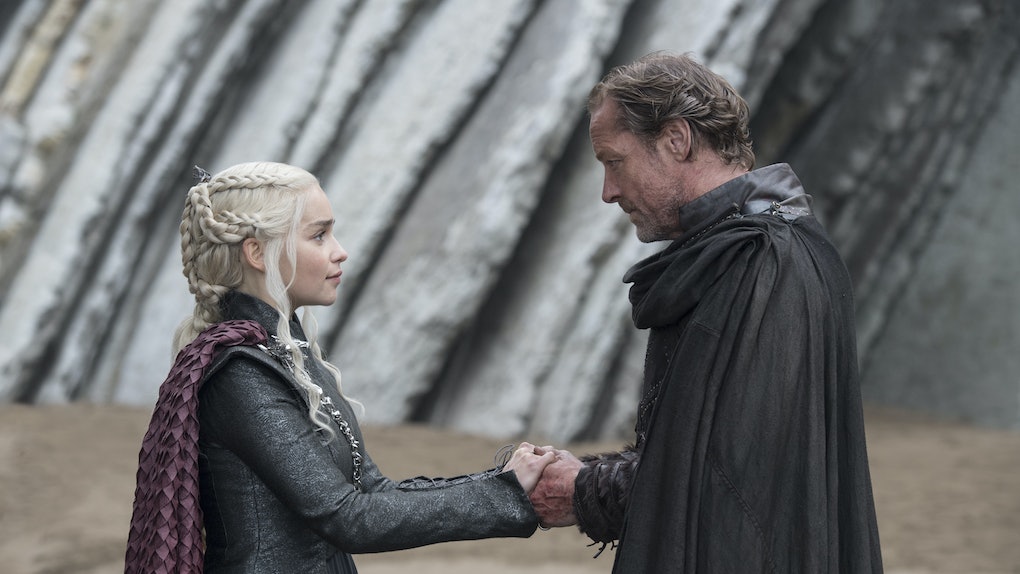 What Happened To Jorah In 'Game Of Thrones' Season 7? There's A Lot To Remember

The Game of Thrones pilot introduced a plethora of characters right off the bat. There was the enormous Stark family, a passel of Lannisters, some Baratheons, a Greyjoy, and all of their assorted sidekicks. Across the Narrow Sea, Daenerys Targaryen was married off to a Dothraki horse lord, which lead to her meeting a disgraced knight, Jorah Mormont. The event may have overshadowed his arrival, but he's stuck around to the final season. What happened to Jorah in Game Of Thrones Season 7? His survival this long is well-nigh miraculous.

Jorah Mormont was vassal to the Starks before he ran to Essos after Ned Stark discovered he was running an illegal slave trade. In shame, his father, Jeor Mormont, took his son's sentence and joined the Night's Watch. Though Jorah's fealty to Daenerys seemed noble and kindly, in reality, he was spying on her for Varys in King's Landing, in hopes of getting a pardon.

Over the seasons, Jorah's alliances shifted. He fell in love with his "Khaleesi," to the point that he refused orders to poison her. However, when his original intentions came to light, Daenerys banished him. However, Jorah did not give up, and made his way back, bringing Tyrion Lannister with him as a prize to show his loyalty. Unfortunately, during the journey, he contracted greyscale, a deadly illness.

At the end of Season 6, Daenerys had banished Jorah a second time, but this time it was to force him to go and find a cure for the supposedly untreatable disease. When fans see him again, he's at the Citadel in a cell, after being told it was hopeless. However, a chance meeting with Sam Tarly, who is studying to be a maester for the Night's Watch, changes his fate. Remembering how much he respected the now-deceased Jeor as Lord Commander, Sam decides to help Jorah with an experimental treatment.

Sam's cure works and Jorah heads out to Daenerys. She's overjoyed to see him. Once again looking to prove himself, Jorah agrees to accompany Jon Snow, who would have been his liege lord had he not been banished, beyond the Wall to capture a wight.

On the trip, Jon realized the Valyrian steel sword he carries, Longclaw, given to him by Jeor, is Jorah's birthright. Jorah refuses to take it back, however, saying Jon is the better heir to it.

As Season 7 ends, Jorah is part of the entourage heading to Winterfell, the first time going there since before his exile. It will not be the most comfortable of arrivals. Lady Lyanna Mormont, his first cousin, now runs Bear Island and will be there already. She will most likely not be pleased to see him, due both to the shame he brought on their house, and the potential threat to her rule.

However, Jorah won't be much of a threat, as his loyalty is to Daenerys, now and forever. The real question is how much longer he can survive as the Night King's army draws closer. Fans will find out when Game of Thrones returns on April 14.