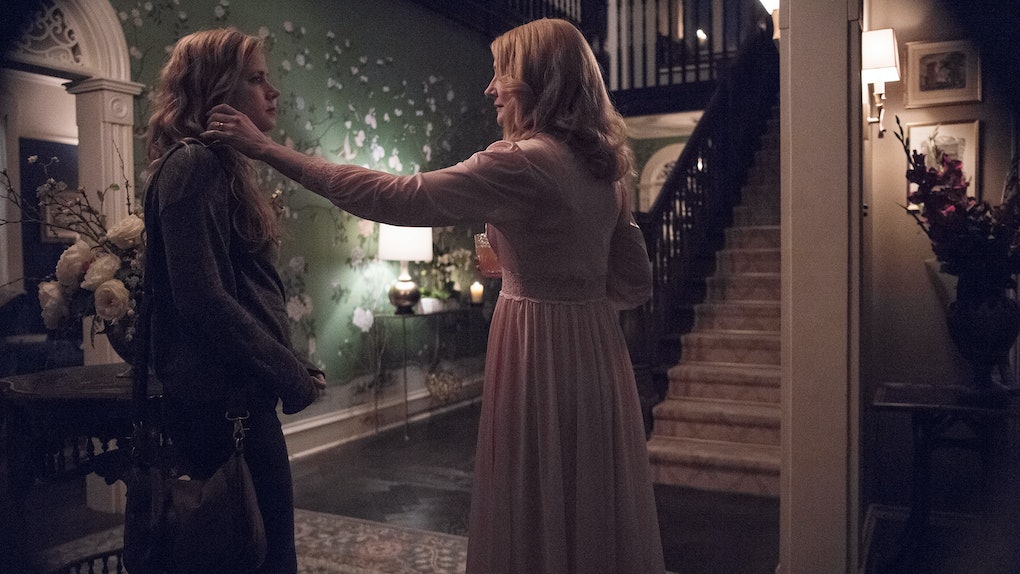 What Happened To Camille On 'Sharp Objects'? Flashbacks Give Fans A Glimpse Into Her Past

From the first moments of Sharp Objects, it is clear something is profoundly wrong with Amy Adams' character Camille Preaker. Her dreams are haunted by images of two inseparable teenage girls. Her diet consists mainly of alcohol. Her boss is trying to send her home to cover a story on murdered teenage girls when it's obvious he wants her to get to the bottom of whatever in troubling her from her past. What happened to Camille on Sharp Objects? To be honest, no one is sure yet.

Camille is an onion, but a fragile one. Over the course of the opening two episodes the layers start peeling back, but there are still many layers to go.

Camille grew up in Wind Gap, the eldest daughter of old money socialite Adora. It's not clear what happened to Camille's dad, but early on in her life, her mother remarried, giving her two step-sisters. The older one, Marian, was her constant companion as a child, and the images Camille sees in her dreams are of herself as a 15-year-old girl and her sister Marian at the age of 12 or so.

Marian was her mother's favorite, to the point Adora shut out Camille. In response, Camille became a tomboy, rebelling against all her mother's rules and lady-like lessons. It's a rebellion still going on today, with Camille's drinking, sneaking out, and general bad behavior.

But Marian didn't live to see adulthood. The flashbacks Camille keeps having revealed the moment when Marian died, as they lay in bed together telling each other stories. What she was suffering from, and how exactly it took her is not clear yet. But her death completely destroyed the family. Adora keeps Marian's room as a shrine to her lost daughter, while Camille had to be pulled from the church screaming when she saw her sister's body.

But the death of her sister seems to have screwed up Camille even further than just wild grief. Somehow connected to these PTSD style flashbacks and the endless drinking is also Camille's need to self-harm. She hallucinates words on her body and takes pins and scratches them into her skin. What happened in the wake of Marian's passing that drove Camille to this point is still unknown.

But perhaps there is a way Camille can find closure, in her vague sleuthing of the deaths of two teenage girls in Wind Gap. After Camille left Wind Gap forever to head to the big city, Adora had one more late pregnancy, which resulted in her new half-sister Amma. Amma is now 14 or 15 herself, and her wild child ways (which she's very good at hiding from her mother) make her a prime potential victim for the serial killer in their midst.

Perhaps Camille can at least keep one half-sister safe in a way she couldn't for the other and in the end find peace? Viewers won't know the answers until they get to the bottom of what's troubling Camille in the first place.

More like this
What Happened Between Vince & Ben In 'Cruel Summer'? Something Went Down
By Rachel Varina
What Happened To Commander Lawrence In 'The Handmaid's Tale' Season 3? Here's The Deal
By Rachel Varina
TikTok's #NotTheMainCharacter Trend Shows The Supporting Role You Connect With Most
By Marisa Casciano
Stay up to date