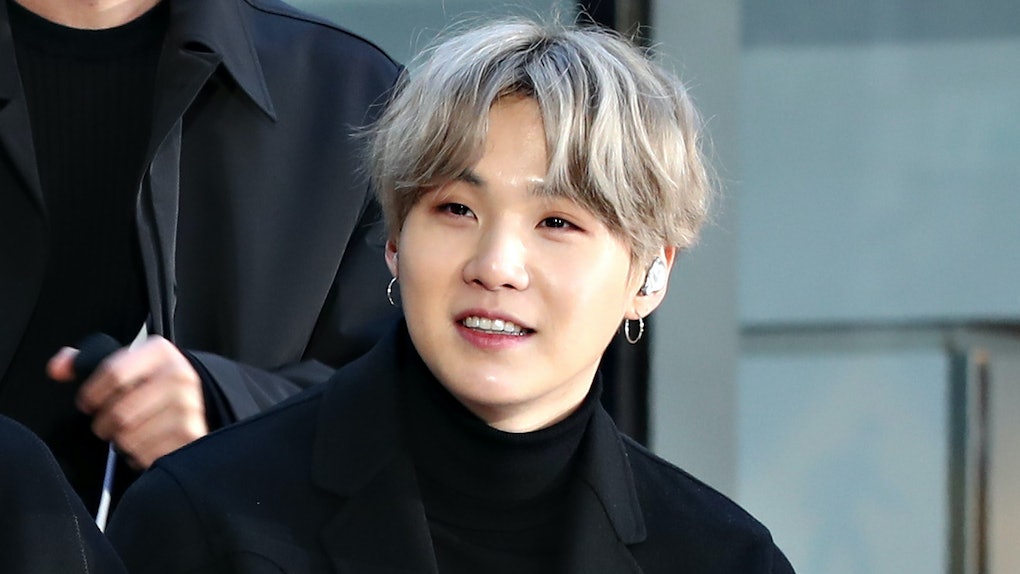 What Happened To BTS' Suga's Shoulder? He's Taking A Short Break To Address His Health

On Friday, Nov. 6, Big Hit Entertainment announced on Weverse that BTS' Suga will temporarily step away from the group's official activities in order to address a health problem. After hearing the news, fans wondered what happened to BTS' Suga's shoulder? You might remember his initial injury actually occurred many years ago.

Suga mentioned the incident in his 2016 Agust D song "The Last," during which the star revealed he "shattered" his shoulder due to an accident early on in his music career. He brought up the situation again in an episode of BTS' 2018 docuseries, Burn The Stage, explaining he got hit by a car while working as a delivery boy. Although he received treatment in the form of rehabilitation, the pain still came from time to time. Most recently, he felt some discomfort during BTS’s Map of the Soul ON:E online concerts. That's why Suga decided to take some time off and undergo surgery in order to fully address the problem.

“Suga underwent surgery to repair his torn shoulder labrum on November 3," Big Hit Entertainment wrote. "The surgery, to address a problem that had constantly been a health and wellness issue for Suga, was completed successfully and he is currently resting and recovering following his physician's advice that Suga must undergo a strict and unhindered period of recovery."

The company explained the accident that caused his injury happened in 2012 before BTS' debut. The following year, he was diagnosed with a dislocated shoulder in 2013 and his pains continued until he was further diagnosed in 2019 with "posterior labral tear of his left shoulder." According to Big Hit, this means "the cartilage around his left shoulder joint has been torn."

Over the years, the rapper's received treatment so he can perform on stage, but the pain didn't stop and he was unable to raise his arms high. "He underwent constant rehabilitation and treatment during his career, but unfortunately, his symptoms did not improve measurably. These symptoms have appeared with increasing frequency in recent years, affecting Suga not only on the stage but in the course of his daily life as well," Big Hit continued, adding the rapper's mandatory military service also influenced his decision to go ahead with the procedure. (In Korea, all men ages 18 to 28 are required to serve in the military.)

The company went on to explain Suga likely won't return to performing with BTS for a while and fans shouldn't expect him in the group's upcoming BE promotional activities. When doctors deem he's ready to perform again, he'll begin physical therapy to prepare to take the stage again.

Big Hit ended their statement with a message from Suga to ARMYs: "Please understand this time as being my chance to prepare to meet you again strong and healthy, and even if I must be away for a short while please wait for me to come back to you."

Suga has nothing to worry about, as ARMYs will be right here waiting for him when he comes back.