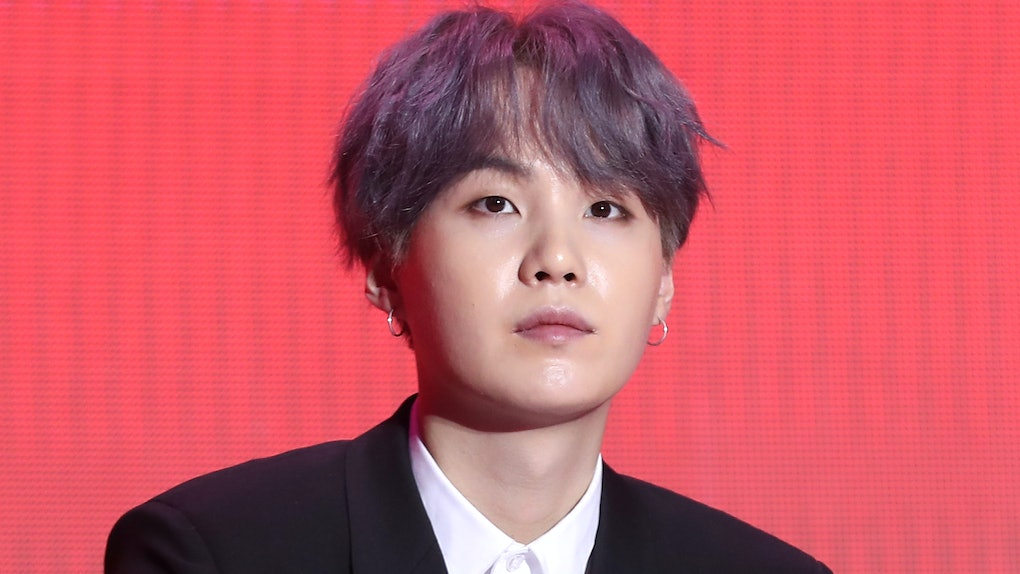 What Did Suga Do Before BTS? He Jokes He Was "Tricked" Into Joining BTS

Big Hit Entertainment really nailed it with BTS because RM, Jin, Suga, J-Hope, Jimin, V, and Jungkook are equally as amazing on their own as they are together. Each member has his own unique talents that make him essential to the group, and Suga's is rapping, producing, and songwriting. One theme that always makes its way into Suga's solo music is his road toward achieving his dreams, and that's why fans may wonder what Suga did before BTS. While Suga always planned on pursuing music, his journey getting there consisted of a few surprising turns.

ARMYs know RM was the first member of BTS, and after him was Suga. Although he joined Big Hit in 2010 when he was only 17 years old, his musical journey started way before that because Suga immersed himself into the underground rap scene during his school days. His path toward becoming a musician didn't exactly go as Suga planned, but every step along the way let him to where he is today.

Here's everything you need to know about Suga's life before BTS.

Where did BTS' Suga grow up?

Suga's real name is Min Yoongi and he was born on March 9, 1993, making him the second oldest member of BTS behind Jin. Suga's also proud to be from Daegu — the fourth largest city in Korea. He often references his home town in his solo music, like in "Agust D," during which he calls himself "D boy" because he's from Daegu.

Although Suga is now living in Seoul, where Big Hit's headquarters is located, he continues being part of Daegu by giving back to his hometown. In February, Suga donated 100 million KRW to the Hope Bridge Korea Disaster Relief Association in order to help those affected by the coronavirus. "I wanted to contribute to help with the difficulties of my hometown, even if it’s just a little," Suga said at the time, according to the association.

Where did BTS' Suga go to school?

Next up is Suga's school life. While living in Daegu, he reportedly attended Taejeon Elementary School, Gwaneum Middle School, and Gangbuk High School, but once Suga became a trainee, he transferred over to the same school as RM, Apgujeong High School in Seoul.

If you're wondering what Suga was like growing up, during a Sept. 30 appearance on the Tonight Show Starring Jimmy Fallon, the rapper revealed what kind of student he was in high school. "You know, there is always someone in class who is bad at studies," Suga began, making the guys laugh. "I wasn't that attached to school. I also had a part-time job back then, but my attendance was really good. I just wasn't into schoolwork that much."

Watch Suga talk about his school days near the 4:18 mark in the video below.

What were BTS' Suga's hobbies?

As for Suga's hobbies growing up, it's no surprise he was musically inclined. In high school, he was known as a rapper under the name Gloss, but his musical interests didn't stop there. In a December 2019 interview with the Daily News, Suga's former music teacher said he once asked her how to play the piano. Eventually, he picked it up and the instrument became the subject of his solo song "First Love," during which Suga says the piano was his form of escapism during his early school days.

Outside of school, Suga also enjoyed playing basketball. In BTS' "Dynamite" ('70s remix) music video, he revealed his stage name is actually an abbreviated form of his former basketball position, which was shooting guard.

Suga also had a part-time job while he was a trainee. In BTS' 2018 docuseries Burn The Stage, Suga said he used to be a delivery boy and one day, he was unfortunately involved in an accident that left him with a shoulder injury. Big Hit supported him throughout his recovery once they realized what happened.

One of the artists that influenced Suga as an aspiring rapper was Eminem. In a 2018 behind-the-scenes video of BTS at the Grammy Museum, Suga revealed the first album he ever bought was Eminem's debut 1996 record, Infinite. During a March 2019 interview with Entertainment Weekly, Suga also said Eminem was his first concert and his favorite karaoke song is "Rap God."

Where did BTS' Suga train?

After being an underground rapper for years, Suga put his skills to the test by auditioning for Big Hit Entertainment's hip hop competition called "Hit It." He placed second and then joined the agency as a producer.

Suga didn't plan on becoming a performer at first. He once joked Big Hit's founder and co-CEO, Bang Si-hyuk, "tricked" him into becoming a K-Pop idol. "He told me I’d be in a [hip-hop] group like 1TYM. He said I wouldn’t have to dance, only groove a little. He said all I’d have to do is focus on rapping," Suga told Rookie King Channel BTS in 2013.

Luckily, it all worked out in the end because joining BTS allowed Suga to showcase his amazing rap and production skills to the world.

More like this
These Tweets Comparing SuperM's "We Do" To BTS' "Dynamite" Video Are So Split
By Michele Mendez
Taylor Swift's 'Fearless (Taylor's Version)' Lyric Changes Are Small, But Meaningful
By Michele Mendez
Kanye West's New Netflix Docuseries Sounds Epic, But Will It Feature Kim Kardashian?
By Brandy Robidoux
Stay up to date