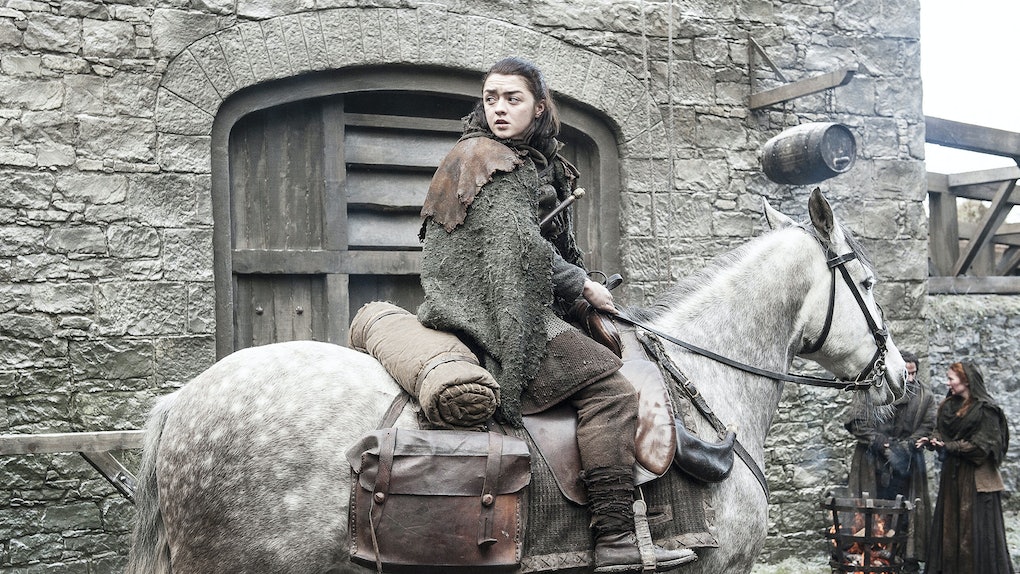 What Happened To Arya Stark In 'Game Of Thrones' Season 7? Let's Review

Game of Thrones Season 8 is just around the corner. It's been a long time since fans last saw these characters, as Season 7 aired back in the summer of 2017, nearly two years ago. Considering the complicated adventures most of the cast has gone through, it's not surprising everyone might need a little refresher as to where they stand going into the new season. What happened to Arya Stark in Game Of Thrones Season 7? Her story is one of the most complex over the years, so pay attention.

Arya Stark was born the third child in the Stark line up and the second daughter. Unlike her sister Sansa, she was a rebel and a tomboy, always wanting to sword fight instead of sewing. When fans meet Arya, she's about to head to King's Landing with her father, Ned, where he winds up getting her sword fighting lessons.

It's a good thing, too. When Ned is beheaded, Arya is tossed to the winds, made over as a boy named Arry in hopes of smuggling her North. Instead, she winds up at Harrenhal working for Tywin Lannister as a cupbearer where she meets a Faceless Man assassin. Then she spends two seasons with the Hound attempting to get home, only to arrive too late. With nowhere to go, she ships herself overseas to the Faceless Men.

Season 7 sees Arya return to Westeros, having realized she does not want to abnegate herself to the Faceless Man cause. Instead, she takes her new training and uses to it to get back to her list of people she plans to make pay for her family's deaths. After killing the Frey family, she plans to hit Cersei. But a chance meeting with Hot Pie changes her destination when she learns Jon Snow has taken back Winterfell and rules as King in the North.

Arya also runs into her wolf Nymeria on the way home, who has a new pack to run with. When she gets to Winterfell, Jon has already gone south, but Sansa and Bran are there. Littlefinger is too, and he sees an opportunity to play Sansa and Arya off each other. Thankfully, Sansa and Bran are both wise to Littlefinger's schemes, though not before Arya's new job and her responsibility for the Frey massacre comes out.

The Starks show a united front against Littlefinger, taking him out, with Arya doing the honors. The family has bonded, but what will happen when Jon returns home, with a new girlfriend and dragon pets in tow? Arya and Jon were always close, but the revelation he's a Targaryen may turn that tide, with Arya and Sansa sticking together instead.

As for Arya's mission, she may have put that aside for now for family, but how long until that changes? With the coming war against the Night King, she's the most prepared of the Starks to survive in battle.

However, losing more family may drive her back out on the road, ready to take down all her enemies once more. Fans will find out when Game of Thrones returns Sunday, April 14, 2019.

More like this
'House Of The Dragon': 'GOT' Spinoff Cast, Release Date, Filming News, & More
By Ani Bundel
What Happened To Commander Lawrence In 'The Handmaid's Tale' Season 3? Here's The Deal
By Rachel Varina
Who Is Annabelle On 'Cruel Summer'? Let's Discuss Kate's New Twist
By Rachel Varina
Stay up to date