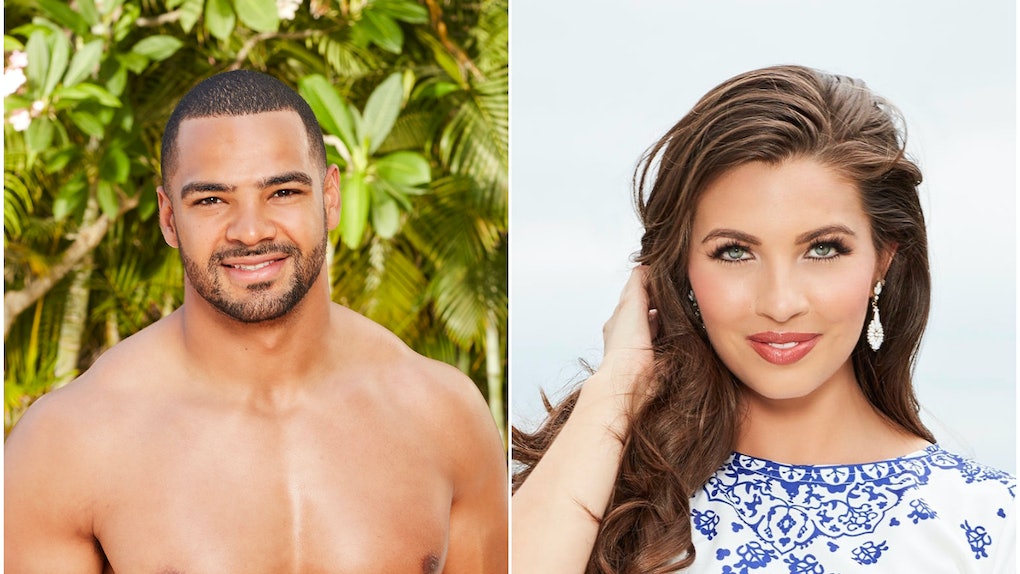 What Happened Between Clay & Angela? 'Bachelor In Paradise' Explains Their Split

The Bachelor in Paradise relationships that didn't last past the contestants' time on the beach are a little tricky to remember a year later. But what's even more complicated is keeping track of pairs who get together away from the limelight. Such was the case for Paradise Season 6 contestant Clay Harbor and Season 5's Angela Amezcua, who became a couple soon after last year's Paradise season. But as Annaliese Puccini was quick to spill on the Season 6 premiere, the reasons behind the breakup were a little shady. What happened between Clay and Angela? Bachelor in Paradise elaborated on the split.

Chances are you're still too preoccupied with what's going on between Hannah Brown and Tyler Cameron to research this history, but thankfully, there isn't too much to catch up on. Although pro football player Clay appearing on Paradise after a smooth stint on Becca Kufrin's Bachelorette season last year seemed like an obvious choice, he ended up not going to the beach. However, Angela, a Night One castoff from Nick Viall's Bachelor season, did join the Season 5 cast, and briefly dated Eric Bigger before he ditched her for another Paradise woman. Angela didn't really click with anyone else afterward, but Paradise co-star Chris Randone played Cupid off-screen and set up Angela and Clay.

The couple went public with their relationship in September 2018, frequently posting Instagram shots of themselves cuddling together across the country. While Clay lives in Chicago, Angela was based in South Carolina, and unlike other Paradise couples, these two didn't really address the possibility of moving in together with their loyal Instagram followings.

In April 2019, Us Weekly reported Clay and Angela had split more than a month ago. This was why Annaliese, who also appeared on Season 5 of Paradise with Angela, wasn't thrilled about Clay acting flirty with Jane Averbukh upon his arrival in Episode 1 of Season 6.

"I think it's too soon for him to be here, so I'm not really excited," Annaliese told other contestants on the beach.

"When he broke up with Angela, he told her he couldn't even imagine looking at another girl," the former Bachelor contestant said to cameras. "And now he's on the beach where he's supposed to be getting engaged to someone at the end? ... I want to make sure he's not screwing over any more of my friends."

As long as any bumper cars or dogs don't get in the way, Annaliese's mission to keep an eye on Clay could definitely prove successful. After all, how well can you hide from someone if you're stuck on the same beach together?

"I'm good friends with Angela, so I'm having a difficult time with him being here," she told the other ladies during their private time. "I think she is not over him. From what I heard through her, he's not over her either."

"I don’t want to see Angela at home or my friends here be potentially played by somebody," Annaliese said to cameras.

She may have been firm about warning the other women about Clay's possible emotional baggage, but at least one contestant wasn't on board with following her advice. Nicole confessed to producers that since Clay was single, he was basically fair game for any of the women. Fans will have to wait and see if she acts on any particular feelings toward him and Annaliese feels obligated to intervene.