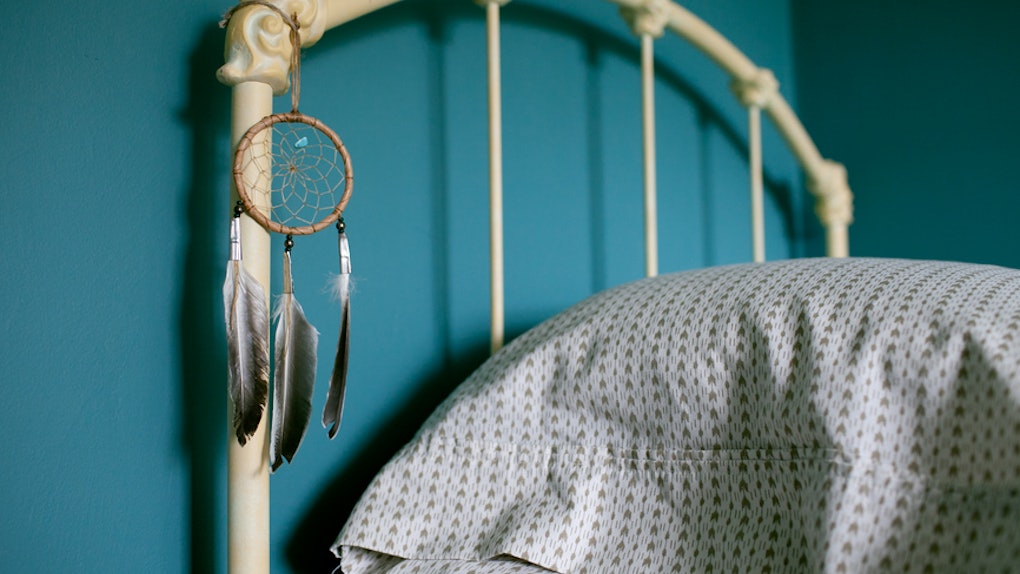 I've always had vivid dreams, and TBH, I'm into it. Even if they're sometimes scary, or so weird or emotionally intense that they take me a full day to shake off, I've always been a believer in the idea that dreams are a window into the mind, and that a lot of information about "where we're at" can be garnered from the way our brains work during our snoozes. While I've recently learned that essential oils can get my nighttime theater to the next level, I've also been doing a little research on what foods cause vivid dreams as well, so I can snack on some before bed and see what happens.

Believe it or not, it's not all that uncommon to eat something before you go to bed and notice a distinct effect on not only your sleep, but your dreams, as well. And while there's admittedly not a ton of hard, scientific research behind the effect certain foods have on dreams, there are still definitely a few that are popularly believed to have more impact on your dream and sleep life than others.

So, if you're interested in seeing which midnight snacks induce vibrance and drama into your dreams, do a little experimentation! You might just rock your own dream world.

Cherries are actually a source of melatonin, which is a sleep hormone that's naturally produced in our brains. Melatonin helps to maintain your circadian rhythm and serotonin levels, and on top of that, it's apparently the serotonin that helps to maintain more awareness during REM, which can lead not only to more intense or vivid dreams, but also means you're more likely to remember them.

Have a handful before you put your head on the pillow, because rumor has it, the tryptophan found in nuts gets turned into niacin, which is a key component in making serotonin and regulating melatonin. Snacks like almonds and peanuts also have magnesium, a natural muscle-relaxer, which certainly can't hurt before bed, right?

Ah, cheese. This delicious blessing of a food is said to be particularly powerful for inducing and enhancing your dream life. This is because of the tryptophan in cheese, which is most capable of producing serotonin when you pair it with carbohydrates — and who doesn't want to do that?

But before you toss a late-night grilled cheese on the stove, you should know that cheese has specifically been associated with bad and bizarre dreaming, according to a study done in 2005 by the British Cheese Board.

Oh yeah, and the sharper the cheese, the weirder the dream, apparently.

So bananas have tryptophan, magnesium, and potassium, which all promote either relaxation or serotonin production. In fact, bananas are one of the most highly recommended foods to help you sleep and relax. And when you go to bed feeling chill, you'll likely have a better chance of actually pleasant dreams that won't totally freak you out.

Spicy food is often associated with causing rather outlandish dreams, so if you're looking to have some off-the-wall nighttime theater, you might want to order something off Seamless with three of those little chili pepper emojis next to it. Apparently spices like nutmeg can also be powerful enough to be interpreted by the brain as being psychoactive. Nothing like getting a little weird at bedtime, right?

Sunflower seeds are another type of food naturally high in melatonin and vitamin B6, so shelling a few before bed might just do the trick to get you sleeping and concocting all kinds of technicolor dreams in that beautiful head of yours.

Now get to sleep! Dreamland is waiting for you.