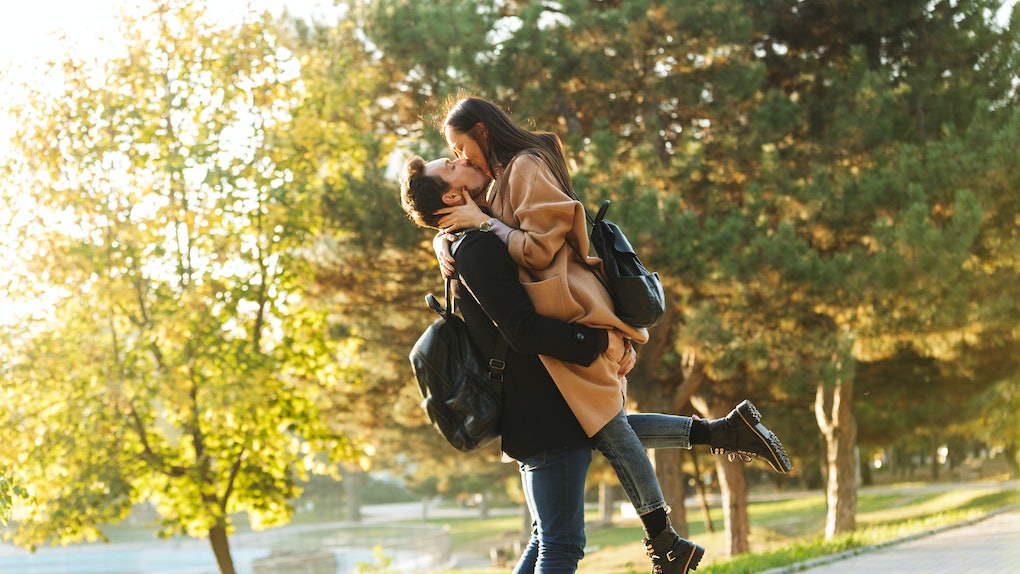 What Does Your Couples Pose Say About You? Experts Weigh In

The memes you send each other, the dates you plan together, the way you make physical contact — these are just a few factors that can offer insight into your relationship. But as they say, a picture is worth a thousand words. And experts say one quick glance at your couples pose can say a lot about you, not only highlighting the nature and strength of your bond but also potentially shedding light on certain issues underneath the surface.

It makes sense, too, given that your body language offers some powerful insight into your thoughts and emotions. When you ask someone to take an impromptu photo with bae, you don’t have a ton of time to think about your pose before you strike it. That means you’ll just naturally fall into whatever position is most comfortable to you — and those instincts can reveal your true feelings about each other.

“Still photos capture a moment in time, but speak volumes about a relationship,” says Traci Brown, relationship expert and author of Persuasion Point. “For example, is this couple happy and on the same page, or are they struggling and going separate directions?”

“You can tell a couple is happy and in love because typically they lean into one another for at least some of their poses,” he tells Elite Daily. “Sometimes, they even look at each other when posing…and smile when they do.”

Different parts of your body can reveal different things. According to Traci Brown, one of the most telling elements is how closely positioned you and your partner are. If your arms or torsos are glued together with no space in between, that can definitely suggest a stronger sense of intimacy than if there’s a gap in between. Another thing to pay attention to is whether or not your shoulders are angled toward each other, as this can suggest that you’re both giving each other your full attention. And according to Patti Wood, a body language expert and author of Snap: Making the Most of First Impressions, Body Language, and Charisma, where your feet point is where your heart lies.

“If one or both partners’ feet are pointed towards the door — then that's where they want to go,” adds Traci Brown.

However, if only one partner is angled inward and the other is facing outward entirely with their body, face, and feet, that may be a red flag, according to Gary Brown.

“This can indicate that they want the picture to be more about them than you, as a couple” he adds.

It’s important to note that there’s a difference between the pose you strike when you randomly ask a friend to snap a pic and the one you use during an engagement shoot when you're being guided by a professional photographer. Wood explains that when the pose has been carefully curated, it says a lot more about how you want to appear. Since the pose was preplanned as opposed to instinctive, it offers insight into the way a couple wants to represent themselves to the world, which may or may not be an accurate depiction of how you really are together.

That said, when you do strike a random pose, there’s lots to suss out about the way you and your boo position your bodies.

For example, it’s super common for couples to hold hands in photos. Wood, who has been studying handholding and other forms of touch for well over 20 years, says it can reveal a lot about the power dynamic in a relationship, as well as demonstrate a certain kind of tenderness. She also says the placement of the hands can indicate which person is in control — or wants to be.

“There’s just a wealth of information in a handhold,” she says. “Typically, it reveals something about connection and control. If a couple chooses to hold hands, at least one member of the couple wants to be seen as a unit. Look for certain qualities of interconnectedness between the hands, and whose hand is on top and whose is on the bottom.”

Another popular pose is for one partner to place their hand on the other’s chest or stomach. Wood explains that this may be just a practical way for the shorter partner to stay physically connected and express affection. But she notes that it can also sometimes be a way of saying “they’re mine” because the hand forms a barrier between the partner and other people. In order to distinguish between the two possibilities, Wood often looks for subtleties in the hand. For example, a relaxed, loosely cupped hand on the chest is less likely to suggest possessiveness than a hand that’s pressed down tightly for more control.

“This is a classic sign of ownership,” adds Traci Brown. “Look at the fingers — the more spread out they are, the bigger statement that person is trying to make.”

But what about the hand on the lower back? Experts agree that can mean multiple things as well.

“It can be very chivalrous or it can have a negative connotation depending on the context of the situation,” says Traci Brown.

Wood concurs, noting that it can show one partner’s desire to help and guide the other.

“The thing to look at is — how easy is it for the person to get out of their position? That tells you a lot about the power balance.”

When one partner is standing in front of the other, experts agree that the best way to interpret the pose is by looking at the nuances of it. If the partner in front is leaning back, that might indicate that they’re looking for protection. Or, if they’re stepping out front and center, that may suggest a hunger for attention.

Who knew that something as small as who’s hand is on top or what direction your feet are pointed in can say so much about your relationship? While looking through your past pics, you’re bound to notice a thing or two that’s rather revealing. But whatever you do, don’t let that make you start obsessing over your future poses. After all, your pose is only genuinely telling about your bond if you just let it happen, rather than trying to force it. Ultimately, the way you and bae naturally fall into place with each other is far more meaningful than any pose you could plan.