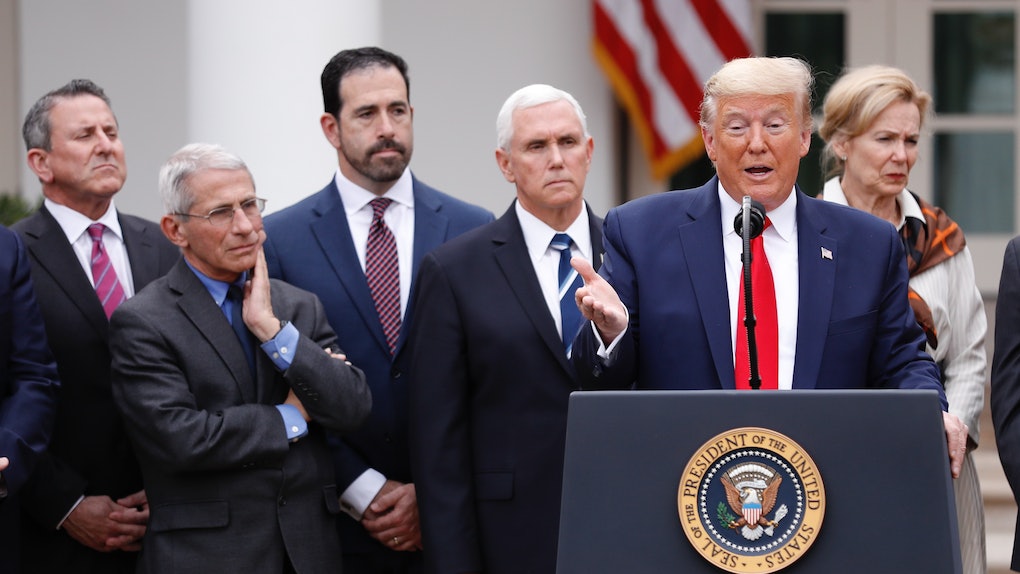 What Does Trump's Coronavirus National Emergency Declaration Mean? Here's What It Does

On Friday, March 13, two days after the World Health Organization (WHO) officially classified coronavirus as a pandemic, President Donald Trump declared a national emergency in response to the outbreak of coronavirus. But what does Trump's coronavirus national emergency declaration mean? At the time of the president's emergency declaration, The New York Times reported that more than 1,800 cases of coronavirus had been confirmed across 47 states. By the time Trump announced a national state of emergency, nearly 30 governors had already declared states of emergency in their states, per Business Insider.

"To unleash the full power of the federal government, I am officially declaring a national emergency," Trump told reporters in the White House Rose Garden on Friday. "The action I am taking will open up access to up to $50 billion."

Trump then went on to urge states to set up emergency operation centers, and encouraged every hospital in the country to activate its emergency preparedness plan, "so that they can meet the needs of Americans everywhere."

According to Trump's statement, this emergency declaration will give the secretary of Health and Human Services (HHS) "new authority" to waive certain laws and regulations in order to give hospitals and health care providers "maximum flexibility to respond to the virus and care for patients." Trump also said that doctors would be able to more easily use tele-health tools for virtual appointments, and that some licensing requirements would be lifted to allow doctors to cross state lines to "provide services in states with the greatest need." Trump said the national emergency declaration would also make it easier for hospitals to access more office space or bring more physicians on board, and that certain length-of-stay requirements would be waived as well.

Although Trump declared a national emergency to allocate more resources to states and health care providers, he simultaneously urged Americans to not take a coronavirus test if they didn't need it. He told reporters that the Food and Drug Administration (FDA) had approved a test for the virus, and that up to half a million new tests would be available early next week — with a potential 1.4 million additional tests later in the week, pending approval of an application from Thermo Fisher Scientific — but he said that Americans shouldn't rush to be tested. "We don't want everybody running out and taking — only if you have certain symptoms," Trump said. Trump added that locations for the new tests would likely be announced on Sunday, March 15.

In addition to promising new tests and waived regulations for health care providers, Trump also announced plans for drive-thru virus testing, and as well as easier admission to nursing homes. Moreover, Trump announced that he had waived all interest on federal student loans for the time being, given the economic uncertainty around coronavirus. Trump also mentioned that he had instructed the secretary of energy to buy "large quantities" of crude oil for the Strategic Petroleum Reserve, as part of his administration's economic response.

Trump was able to declare the national emergency by invoking the Stafford Act, a law enacted in 1988 that enables the Federal Emergency Management Agency (FEMA) to aid state and local governments during “natural catastrophes." By invoking the Stafford Act, Trump can access billions in funds that Congress has allocated to FEMA for disaster relief, per The New York Times. According to Reuters, presidents do not frequently use this power. In 2000, former President Bill Clinton invoked the Stafford Act to declare a national emergency in response to the West Nile Virus, and in 2009, former President Barack Obama invoked the same law in response to a swine flu outbreak.

The rate of confirmed cases is increasing. Per The New York Times, as of the morning of March 13, at least 1,714 coronavirus cases had been confirmed across the country, but by the time Trump spoke to the public at 3:30 p.m. ET, the reported cases had jumped to over 1,800. In response to this increase in coronavirus cases, more than two dozen states have declared states of emergency in order to bypass a number of state and federal laws and to more easily access state funds. President Trump's declaration of a national emergency does not negate any of these state-level declarations, according to Dr. Rachael Piltch-Loeb, a preparedness school at Harvard's T.H. Chan School of Public Health. Instead, "the federal government declaring a state of emergency means that they can provide resources to the state that they otherwise wouldn’t provide," Piltch-Loeb tells Elite Daily.

"One of the reasons that there is some interest in the federal government declaring a state of emergency is so that resources will be available to all states that may be dealing with the coronavirus pandemic, rather than just relying on each state to make determinations on what to do," Piltch-Loeb says. "For example, if we want all states to have the same or similar testing and lab capacities, which they otherwise wouldn’t have."

Trump has faced increasing pressure from state and local officials over the past few weeks to declare a national emergency, Bloomberg reported. The reason many officials have looked to the federal government for a national emergency declaration, Piltch-Loeb says, is "so that resources will be available to all states that may be dealing with the coronavirus pandemic, rather than just relying on each state to make determinations on what to do." These resources could include federal funding, personnel, increased lab capacities, testing capabilities, and other necessary supplies.

More like this
Will Johnson & Johnson's Vaccine Come Back? It's On The Way
By Rhyma Castillo
The J&J Vaccine's Safety Is Vital — Now Let's Do Birth Control
By Nylah Burton
Is Sephora Closed Due To Coronavirus? Here's How The Brand Is Responding To The Pandemic
By Theresa Massony
Stay up to date