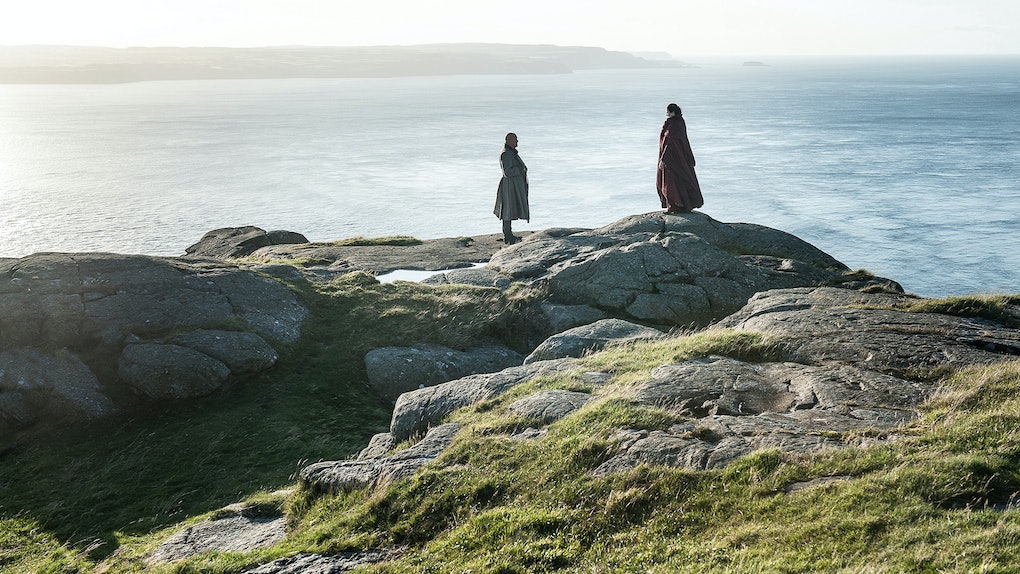 What Does "The Night Dark & Full Of Terrors" Mean In 'Game Of Thrones'? Let's Break It Down

Game of Thrones is a show that's spawned memes and catchphrases the world over. Season 1 began with the Stark motto, "Winter is coming," which not only adorns posters, tee-shirts, mugs, but a very nice fan site as well. Season 2 was no less shabby, sparking one of the show's most threatening phrases: "The Night is Dark and Full of Terrors." Spoken by the red priestess Melisandre, the expression is used by the followers of the Red God, R'hllor. What does "The Night is Dark and Full of Terrors" mean? It actually may be directly related to the Night King.

The world of Westeros and Essos is filled with different religions. In the North, people worship the Old Gods, a spiritual oneness with nature."The Seven" is the dominant belief structure in the south, a pantheon of gods, each representing a different facet of life. On the Iron Islands, one finds monotheism, the worship of a single deity. The Red God's followers are monotheist as well, but they are believers in Apocalypticism, that end times are coming, and only the Lord of the Light can save them.

However, what is fascinating is even though this cult was born on Essos, its roots and scriptures bear a shocking resemblance to the historical myths of Westeros, specifically the ones concerning the first time the Army of the Dead and the Night King came down from the North.

When fans meet Melisandre, her warning about the Night sounds like the sort of thing Old Nan might say to Bran. But consider the reality of the Night King's attacks. The sky darkens, the clouds swirl, a blizzard suddenly descends from a cloudless sky. Night comes, and with it, hordes of wights, turning every living thing they come across into one of their own.

The Night's Watch was founded on the principles of watching and waiting for this terrifying occurrence to return. Consider their words: "Night comes, and now my watch begins..." It's not a coincidence. When the Battle of Winterfell comes in Season 8, fans will see the truth of this idiom spoken by R'hllor's followers. What's not clear is how the Lord of the Light will help turn the tide of battle, if at all.

As fans learned in Season 6, R'hllor is a pretty popular God in Essos, with priests and priestess preaching His Word. Daenerys has become part of their religious teachings too, that she is the Messiah they've been waiting for.

All this has fallen by the wayside since Daenerys arrived in Westeros because R'hllor's followers are few and far between. The only one is Melisandre, but her time may yet come to be useful.

Despite the myriad misinterpretations of her visions over the years, the Red God has been leading Melisandre to this moment when the living must once again face the dead. With Daenerys in Winterfell and the Night King on the move, will Melisandre and her Lord of the Light come to the rescue? Fans will find out when Game of Thrones returns on Sunday, April 14, 2019.