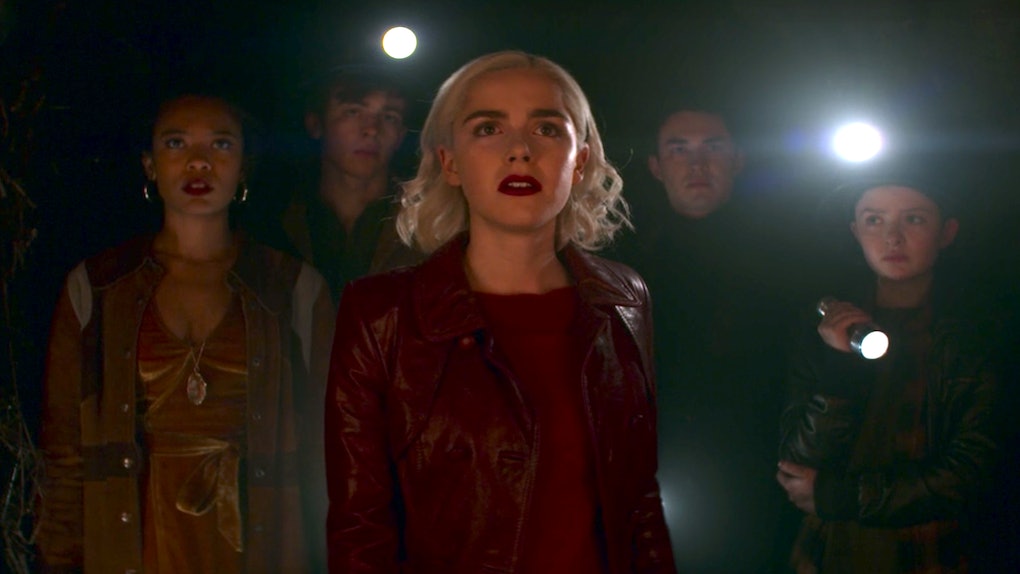 What Does Sabrina's Herald Of Hell Prophecy Mean? The Netflix Show Takes A Dark Turn

The big question that has been at the center of both seasons of Chilling Adventures of Sabrina is why the Dark Lord is so deeply invested in Sabrina Spellman anyway. The Dark Lord went out of his way to make sure Lilith got Sabrina to sign her name to the Book of the Beast, and then he involved himself personally to try to lead her further down the path of darkness. What makes her so special? Well, a prophecy Sabrina discovers in Part 2 finally answers that question. Although, it will still leave viewers asking what does Sabrina's Herald of Hell prophecy mean. Let's see if we can shed some light on the confusing prophecy.

Spoiler alert: This post contains plot details from Chilling Adventures of Sabrina Part 2 Episode 7, "The Miracles of Sabrina Spellman." In the latter half of the new season, something major happens to Sabrina's powers. After being shot and presumably killed by a pair of angels, Sabrina shockingly began to levitate, her hands turned to flames, and she unleashed unbelievable new abilities, such as destroying angels on the spot and resurrecting two dead witches. After that strange event, Sabrina kept her unexplainable powers, now able to change the weather at a whim and even cure Roz' blindness. Sabrina's fellow witches were so stunned by the display of power they began referring to these acts as miracles.

But why does Sabrina suddenly have these incredible powers? That's the question that remains unanswered... but Harvey of all people may have actually found the key to understanding what is going on with Sabrina. While he is working in the mines, Harvey finds himself drawn to an abandoned tunnel. When he and Theo explore it, they are faced with a demonic guardian, whom Theo is able to kill, and then the discover what the demon was guarding. Harvey and Theo quickly round up Sabrina, Roz, and Nick, and the whole gang goes into the tunnel to look at a prophetic mosaic with Sabrina's face right in the middle.

Something within Sabrina immediately recognizes this strange carving as a prophecy, and she says, "I am the Herald of Hell. I am evil." Now, this actually is not the first time that we have heard the phrase Herald of Hell this season. At the beginning of the new season, the Dark Lord reveals to Lilith that he is grooming Sabrina to be his Herald of Hell, adding that she will also have a throne at his side. From that statement, it sounds like this Herald of Hell prophecy that Sabrina has found may actual be about her ascent as the right-hand woman to the Dark Lord.

Of course, all of this is terrible for Lilith. This whole season, she has been turning on the Dark Lord after finding out that he is giving the throne promised to her to Sabrina instead. This prophecy mosaic seems to be physical manifestation of the Dark Lord's plans for Sabrina and his betrayal of Lilith. We will just have to keep watching to see if the prophecy is fulfilled or Sabrina can find some way to go against it.