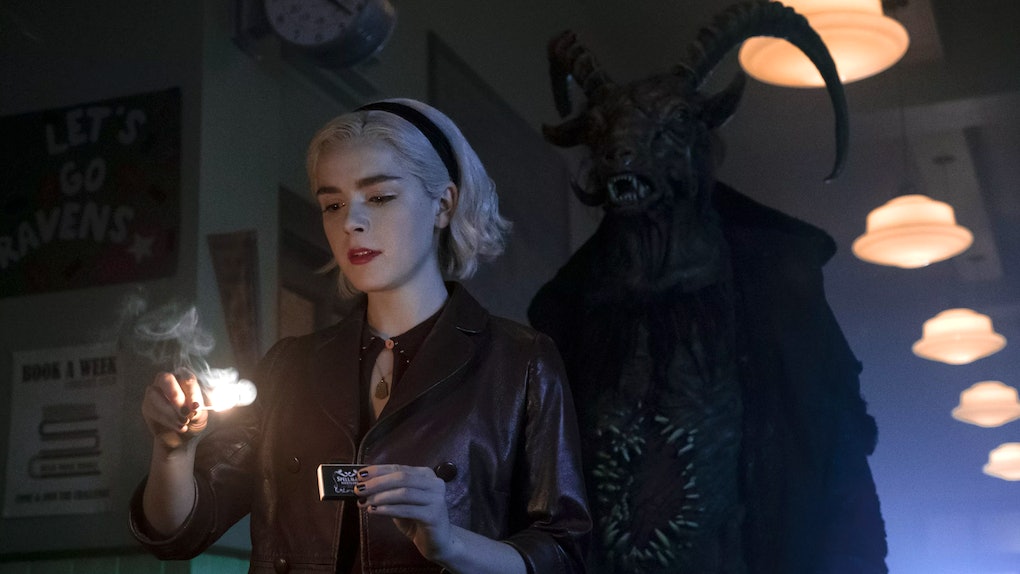 What Does Sabrina's Ascension Mean? 'Chilling Adventures Of Sabrina' Teased A Dark Fate

The first part of Chilling Adventures of Sabrina was all about the Dark Lord trying to get Sabrina to sign her name to his Book of the Beast, but now that he has succeeded in that, what are his plans with Sabrina in Part 2? Thankfully, the new run of episodes does not waste any time before giving us a scary answer to that question. Although, the specifics of the Dark Lord's plans are still a mystery. What does Sabrina's ascension mean, really? It sounds like the Dark Lord has big plans for Sabrina, and they are not exactly popular among his fellow demons.

Spoiler alert: This post contains plot details from the first episode of Chilling Adventures of Sabrina Part 2. Now that Sabrina has fully given herself over to her witchy half and effectively turned her back on the mortal world, she starts off the new run of episodes by fully throwing herself into the Academy of Unseen Arts by running for the coveted Top Boy position. Not only does Sabrina have to face a series of magical tests and Father Blackwood's misogynistic putdowns to win the position, but Sabrina is also being attacked by a trio of demons. The three horned demons will look familiar to people who watched the Chilling Adventures of Sabrina holiday special, as we briefly see them set out from a cave towards Greendale at the very end.

At first, Sabrina assumes that Father Blackwood sent these demons to distract her from the Top Boy competition, but when Nick helps Sabrina summon the three all together, they reveal that they came to attack Sabrina of their own volition. They introduce themselves as the three Plague Kings of Hell: Asmodeus, the Lord of Vermin; Purson, the Lord of Shadow; and Beelzebub, the Lord of Flies.

So, why were the Plague Kings after Sabrina? The demons reveal that they were trying to stop her from "ascending." Father Blackwood banishes the demons before we get any clarification on what that means, but it seems clear that not everyone in hell is on board with the Dark Lord's plan for Sabrina.

Shortly afterwards, the Dark Lord reveals to Lilith that he wants Sabrina to be his herald to open the gates of hell, and Lilith is surprised by this due to Sabrina's half-mortal side (and obviously jealous as well). This may also be the reason that other demons in hell are going against the Dark Lord's wishes and attacking Sabrina, since he seems intent on elevating a half-mortal to a position of high power in hell.

It is still unclear what this ascension entails, but it definitely looks like it will be at the heart of Part 2. And interestingly enough, this is also the first time we have seen other demons dissent against the Dark Lord. It is bad news for Sabrina, though, as she may have to face other creatures from hell who also do not want her to ascend... including Lilith. Sabrina herself probably does not want to ascent either, if she knew what was actually going on. We will have to see if she finally catches on to the Dark Lord's plans this season or not.