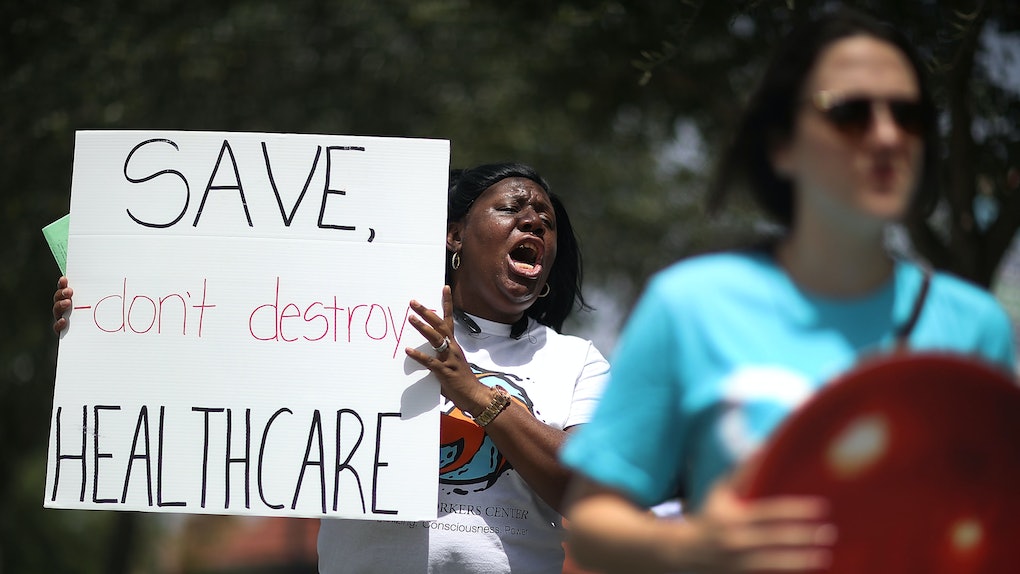 What Does Obamacare Being Ruled As Unconstitutional Mean? It's Not The End

The future of the Affordable Care Act (ACA) aka Obamacare, the nation's current healthcare plan signed into law under President Barack Obama, has been hanging in the balance since Obama exited the White House and President Donald Trump entered. Now, there's a new chapter in the healthcare saga because on Friday, Dec. 14, a Texas judge struck the entirety of the ACA down, according to The New York Times. In light of this news, you might be wondering what the Obamacare ruling means for you and your healthcare coverage.

Under Obama, the ACA laid out a tax penalty for those who failed to purchase insurance, based on the idea that Congress had taxing power. However, back in June, 20 states lead by Texas, with the backing of the White House, filed a lawsuit claiming that the individual mandate of the ACA is unconstitutional because the government can't force people to buy health insurance, according to The New York Times. Cut to Dec. 14, and Judge Reed O’Connor of the Federal District Court in Fort Worth, Texas, ruled in favor of the states agreeing that the ACA individual mandate is unconstitutional and therefore every other part of the ACA is no longer valid, according to The New York Times.

So, what happens now? The last day to sign up for Obamacare is Saturday, Dec. 15 in most states, and that's still the case. The decision will not effect open enrollment, according to the Healthcare.gov. You will still be able to apply for coverage. In fact, per CNN, your healthcare coverage won't see any immediate change, meaning your current plan will stay the same regardless of this ruling — so there's some good news. Furthermore, a group of left-leaning states led by California are already making moves to appeal.

Nancy Pelosi, the new Democratic House leader, said in a Dec. 14 statement that the House will definitely intervene in this "cruel decision," citing that the "Republicans are fully responsible" and the House will appeal on behalf of those families who are "in danger of losing their health coverage." She said,

Republicans are fully responsible for this cruel decision and for the fear they have struck into millions of families across America who are now in danger of losing their health coverage. When House Democrats take the gavel, the House of Representatives will move swiftly to formally intervene in the appeals process to uphold the life-saving protections for people with pre-existing conditions and reject Republicans' effort to destroy the Affordable Care Act.

California Attorney General Xavier Becerra called Reed's ruling "an assault," an a spokesperson indicated to CNN that a California-led appeal is imminent. Elite Daily reached out to Becerra's office for comment, but did not immediately hear back. He said in a statement,

Today's ruling is an assault on 133 million Americans with preexisting conditions, on the 20 million Americans who rely on the ACA's consumer protections for healthcare, on America's faithful progress toward affordable healthcare for all Americans. The ACA has already survived more than 70 unsuccessful repeal attempts and withstood scrutiny in the Supreme Court.

The appeal, once in motion, could leave this decision up to the Supreme Court. Steve Vladeck, a CNN legal analyst, believes that should it land on the Supreme Court desk they would probably turn away Reed's ruling — seeing as how they've already dismissed two other challenges to the ACA. Recently, on Dec. 10 the Supreme Court turned away two cases surrounding states trying to bar Planned Parenthood from medicaid, which is currently allowed under the ACA, according to The New York Times,

However, if the appeal process doesn't work in favor of Pelosi and the Democrats, then quite a bit will be lost. According to The Times, insurance companies will no longer have to allow adults up to 26 to be covered under their parents' plan, there will be no cap on out-of-pocket costs, and there will no longer be protections for people with pre-existing conditions, which has been a hot button issue. Republicans were working to strip those protections even before this case was brought to court, according to PBS News.

So, if you fall under any of those categories, then you might want to pay close attention to the appeal process.