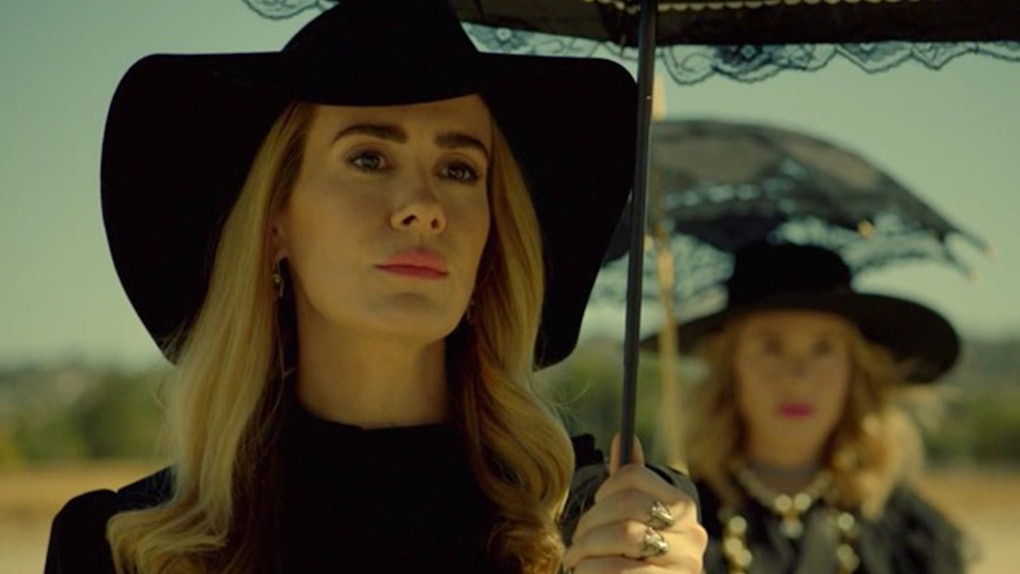 What Does 'American Horror Story: Double Feature' Mean? There Are 2 Casts

Ryan Murphy finally revealed the title of the new season of American Horror Story... but it's giving fans more questions than answers. Unlike past seasons, in which the name would reveal something important about the setting or central element of the story, Double Feature really doesn't say too much about what's actually going to go down in Season 10. And when Murphy tried to clarify the theme further by saying the new season is really two seasons, things just got more confusing for fans. So, what does American Horror Story: Double Feature mean? It apparently includes a whole new cast that hasn't been revealed yet.

After a full year of teasing bits of info about Season 10, Murphy revealed the title at long last on Friday, March 20. The teaser video for American Horror Story: Double Feature described the season as telling two horrifying stories, one by the sea and one by the sand. That certainly tracked with all the clues Murphy had previously dropped, including several photos of the beach. But there were still a lot of questions, which actor Nico Greetham (who'd worked with Murphy on Glee and The Prom) vocalized in the comments section of the title reveal post by calmly asking "!!!WHAT DOES THIS MEAN SIR!!!"

Murphy's response to that comment only confused the fandom more: "It means TWO SEASONS for the fans airing in one calendar year," Murphy wrote. "One set by the sea (this cast already announced). A second by the sand (that cast announcement is coming)."

Um, excuse me? What? The Double Feature title reveal video specifically said it would be "two horrifying stories... one season," but Murphy's comment was adamant Double Feature will be two seasons. So, will these new stories count as Season 10 and Season 11, or are they both Season 10? It's not clear yet, but what seems most likely is that Murphy was exaggerating a bit in his description, and Season 10 will be broken up into two parts with some connective tissue revolving around a beach.

What's most exciting about Murphy's comment is the promise of a whole new cast reveal for AHS: Double Feature. So far, only the "sea" cast has been announced — it consists of Evan Peters, Sarah Paulson, Frances Conroy, Macaulay Culkin, Leslie Grossman, Billie Lourd, Adina Porter, Lily Rabe, Angelica Ross, Finn Wittrock, and Denis O'Hare. The "sand" cast has yet to be announced, so fans can look forward to even more AHS updates as 2021 continues.

There's no confirmed premiere date for AHS: Double Feature yet, but since every past season has premiered in the fall to capitalize on spooky season, it's expected to debut on FX in September or October of 2021.