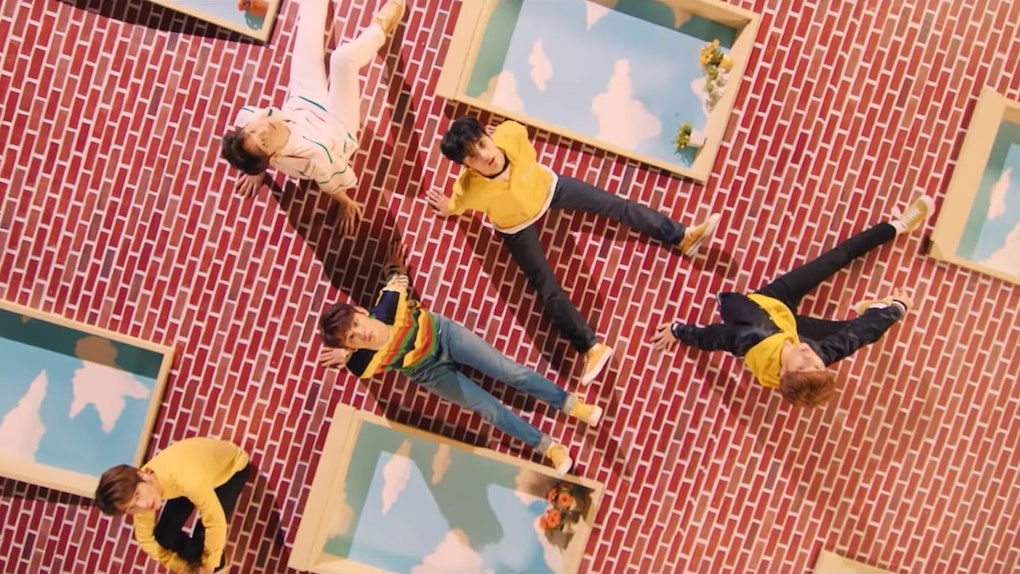 Move over BTS! Just kidding, please stay in the spotlight forever and ever. But the band's label, BigHit Entertainment, has yet another incredible K-Pop group called TXT, and I'm banking on the fact that they'll be a force to reckon with. On March 4, their very first album, called Dream Chapter: Star, was finally released, and there's one song in particular that has fans very interested, and that's "Blue Orangeade." Is it because of the song's quirky name? Perhaps. Or maybe it's because of the song itself, which is so damn good, and inquiring minds need to know the reasoning behind the title. So, what do TXT's "Blue Orangeade" lyrics mean? Well, as the title hints, the song is all about a phenomenon we all know pretty well: opposites attract.

Connecting with this gif on a multitude of levels. Sorry, but not sorry.

The world quickly learned that TXT is made up of five guys: Yeonjun, Soobin, Hueningkai, Taehyun, and Beomgyu. According to a statement made by BigHit Entertainment, "TOMORROW X TOGETHER is a bright and youthful boy band where each member is different from one another, shining in their own way to create a synergy."

You can check out a fun intro video below that shows the boys ~doing their thing~, and it's hella cute:

They are so sweet and energetic and full of zest, and I can't help but smile throughout the entire 2 minutes of this video. But let's get back to the important stuff.

Honestly, I love that TXT stands for Tomorrow x Together, which is all sorts of innovative and cool. The group also released a set of playful concept photos for their new album, which involved having the group pose in what looks like a high school cafeteria and some really interesting pizza graphics, which I didn't hate.

Check out the lyrics for yourself and see what conclusions you ultimately come to. According to a translation posted on Genius, TXT's "Blue Orangeade" lyrics begin:

Someone said, what's going on / How the hell did you do that / I met Al, the opposite of you / I don't know, but... / I know continuously / We're all drawn to each other

Then, the chorus starts:

Hey, You like 2Pac, I like Biggie Biggie / You're a puppy, I'm kitty kitty / We're like an S, another N magnet / It's perfect to be next to you

The rest of the song plays out, with the lyrics,

Honestly, the song itself is not what I was originally expecting, but still an absolute bop. I am really feeling it. You can give "Blue Orangeade" a listen below to see what I mean:

Killin' the game already, TXT! And look, let's do our best not to compare them to BTS, because there's enough room in this world to obsess over both groups, OK? OK.

More like this
TXT's Zodiac Signs Prove That Opposites Really Do Attract
By Chelsea Jackson
Is Saweetie's "See Saw" About Quavo? The Lyrics Are Brutal
By Corinne Sullivan
These Tweets About BTS' 'Bang Bang Con 2021' Sum Up The Epic Performance
By Cianna Garrison
Stay up to date