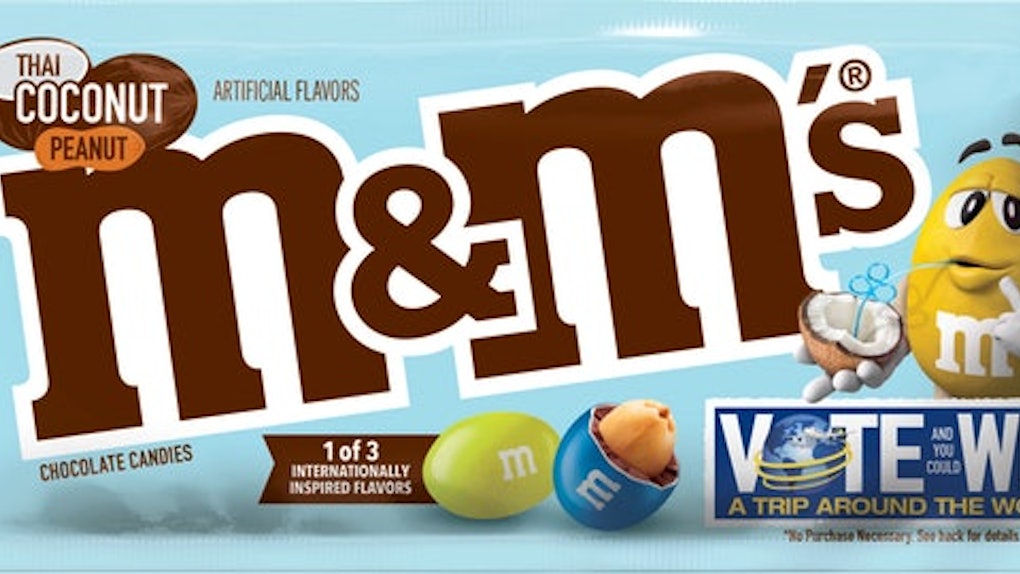 What Do Thai Coconut Peanut M&M's Taste Like? The International Flavor Is Unique

If you've been paying attention to the latest news in the candy world, then you're probably aware of the fact that M&M's recently release three brand new flavors. You also probably know that the brand's flavors for its 2019 Flavor Vote contest have an international flare to them. Yep, the three flavors fighting it out for the top spot each have a different twist on the OG Peanut M&M's. To make things a little easier on you, I can answer one burning question about one of these exotic bites. So, what do Thai Coconut Peanut M&M's taste like? Well, get ready to experience a different spin on the classic snack.

I was able to get a sample of all three M&M's Flavor Vote varieties, thanks to Mars Wrigley Confectionary, and while the Mexican Jalapeño Nut and English Toffee Peanut flavors sound very intriguing, I was immediately pulled in by the tropical-inspired packaging of the Thai Coconut Peanut M&M's with its light blue color and image of a coconut drink complete with a twisty straw. If you're also intrigued by this relaxing scene, then I'll let you know that you can definitely expect some coconut flavor when you take a bite.

In fact, when I first tried the light green-colored candy, coconut was one of the very first flavors that I detected, right after I got past the crunchy candy coating and milk chocolate outer layer. Even as someone who isn't the biggest fan of coconut, I enjoyed how the flavor combined with the chocolate and peanut center to give the traditional Peanut M&M's experience a bit of a tropical twist.

All in all, I'd say if you're a big fan of coconut, Thai Coconut Peanut M&M's definitely deliver the flavor, and even if you're not too hype about coconut, the flavor combined with the chocolate and peanut is not so overpowering to take away from the tasty flavor of classic Peanut M&M's.

If you don't want to take my word for what these candies taste like, you can take note from a Jan. 17 press release sent from Mars Wrigley Confectionary to Elite Daily. In the release, the company describes the Thai Coconut Peanut M&M's as a sweet and savory combination that is "inspired by the tropics of Thailand."

For the other two flavors, the release describes the Jalapeño Peanut M&M's as the "right amount of spice" combined with chocolate, and the English Toffee Peanut is described as a "quintessential" flavor "as elegant as a trip to Great Britain itself."

OK, now that you have a little more info on the flavors, I'll let you know that you can actually taste them all and vote on which one you want to win the Flavor Vote contest for 2019, which runs from Jan. 28, 2019 through May 17, 2019. All three flavors will be in retailers as of Jan. 28, per Mars, and you can text in your choice by sending "Vote" to 84444, or you can log on to www.flavorvote.mms.com to make your M&M's preference known there. The winning flavor will be announced in August 2019.

With three very different flavors, it might be hard to decide, but I guess that just means you'll have to taste them all. It's a tough job, but someone's gotta do it.