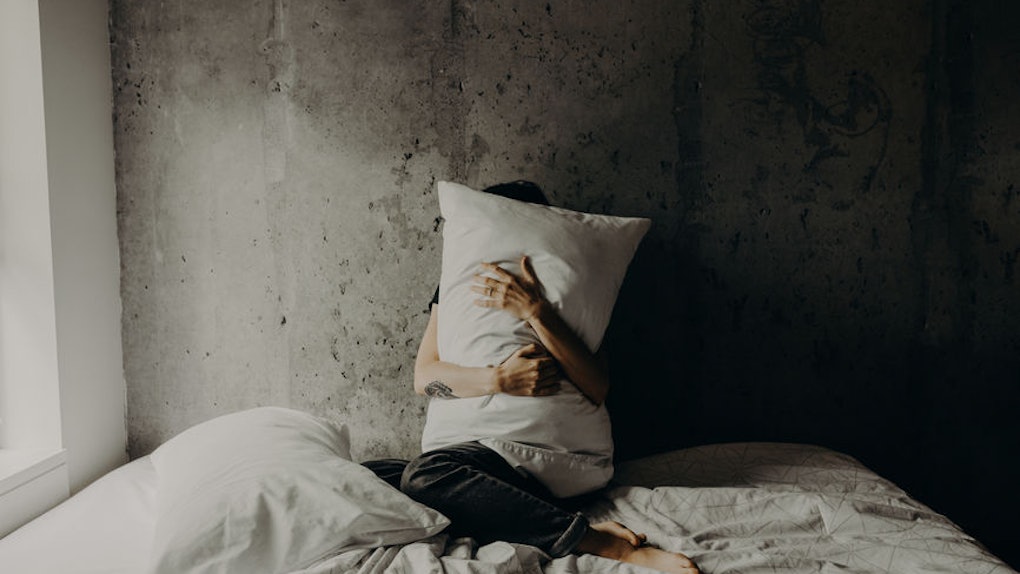 What Do Scary Movies Do To Your Mind? Science Says The Effects Are Super Spooky

Even though fall is approaching, and I love changing leaves and PSLs as much as anyone, I really can't handle one major Halloween staple: scary movies. Intellectually, I know they aren't really happening, but that doesn't prevent me from feeling like they're real. From a pounding heartbeat to nervous sweating, a jump-scare can instantly make me terrified every time. Not to mention the fact that the real world is, IMO, so scary, so why would I want to intentionally terrify myself even more? Plus, what do scary movies really do to your mind when you watch them? Are they really worth those few brief moments of excited adrenaline? Well, according to experts, scary movies can definitely mess with your mind — but, apparently, that might not be such a bad thing.

"Usually when we're watching something we've shut down the motor regions of the brain, and yet those stimuli [from a shocking scene] are so strong that they overcome the inhibition to the motor system," Michael Grabowski, an associate professor of communication at Manhattan College, told Business Insider back in 2016. In other words, even though a part of your brain knows that you are not, in fact, experiencing the horrors of The Shining, your body is built to react to any potential threats in order to keep you alive. So, for instance, that infamous scene where Jack Nicholson leers through the door he's chopped down? No matter how much the logical part of your brain knows it isn't real, the scene is still intense enough to warn your brain to be on high alert.

In fact, notorious scary movie director Alfred Hitchcock was intentional about manipulating his viewers' brains at different points in his movies, according to a study on neurocinematics (aka the neuroscience of film), published in the academic journal Projections: The Journal for Movies and Mind. The study's authors explained Hitchcock's understanding of the brain's reactions to scary scenes:

The fact that Hitchcock was able to orchestrate the responses of so many different brain regions, turning them on and off at the same time across all viewers, may provide neuroscientific evidence for his notoriously famous ability to master and manipulate viewers’ minds.

Even more fascinating, some researchers have actually found a connection between watching a scary movie and tricking your mind and body into increasing your white blood cell count. In an experiment that, TBH, kind of sounds like my personal nightmare, researchers examined blood samples from 32 men and women, ages 20 to 26, before, during, and after making them watch the horror film, The Texas Chainsaw Massacre. The results, which were published in The International Journal on the Biology of Stress, revealed that, while the participants' blood samples showed an increased number of white blood cells, their heart rate and blood pressure levels had also temporarily risen while watching the scary movie.

However, most research on the subject isn't totally clear about whether or not scary movies are really linked to any lasting effects, positive or negative, on your mind — that is, unless you watch them as a child. According to one 1999 study, published in the journal Media Psychology, the younger you are when you encounter something scary, like a horror movie, the longer the stress-related effects may last into your adult years. That might explain your extreme fear of clowns, even though you haven't actually seen one IRL in years.

To that point, the study authors noted in their research that, even as you get older, some things about your relationship with scary movies simply never change. "It appears that people may never outgrow the need to clutch a pillow (or a companion) when they become frightened," the researchers wrote.

So go ahead and bury your face in your childhood stuffed animal, or hide in the couch beside your SO, because if you're watching a scary movie, chances are, you're definitely going to be spooked.